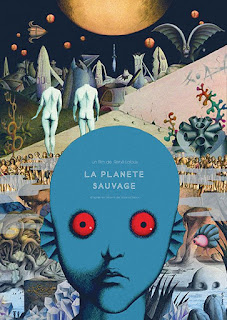 Fantastic Planet, originally calle La planète sauvage, is an animated film directed by René Laloux and scored by Alain Goraguer.  Based on the 1957 science fiction novel Oms en série by French science fiction writer Stefan Wul, the movie version was a long co-production with a Czechoslovakian animation company, delayed in part when the Soviet Union invaded the country to to suppress the "Prague Spring" uprising in 1968.  It was an award-winning film in France, and made it to the United States courtesy of Roger Corman and an English dub featuring Barry Bostwick as the narrator.
The story involves an "Om" named Terr (Jean Valmont) whose mother is accidentally killed by a group of Draag children.  The Draag are gigantic blue aliens that live on the planet Ygam and, though technologically advanced, are slow to reproduce and spend most of their time in meditation.  The Oms, brought to Ygam from Terra, are often kept as pets, but have become a problem on Ygam because of their tendency to breed faster causing them to be looked upon as an infestation.
Terr is the pet of Tiwa (Jennifer Drake), the daughter of Master Sinh (Jean Topart).  He is early on fitted with a collar to keep him in line and, though Tiwa treasures him at first, she gradually loses interest as she becomes a teenager.  What is unique about Terr is that he is close to her while she receives her lessons, beamed directing into her mind via headset, and so he learns the knowledge of the Draags and Ygam, knowledge which becomes important when he escapes with the headset and joins a tribe of wild Oms in an abandoned park.  Eventually this knowledge leads to the Oms forcing the Draags to come to terms with them.
Fantastic Planet is definitely a visual treat, looking like nothing less than the cover of a Nektar album come to life.  It is filled with strange plants and animals, and the Draags themselves are an interesting design, showing signs of aquatic origins on what appears to be a mostly dry planet.  In keeping with the same line, many of the other creatures also look like they were amphibious at some point.  The designs are unique, appearing to be somewhat influenced by Terry Gilliam at points, and obviously had some influence on fantasy artists throughout the 1970s and 1980s. The musical score is reminiscent of typical progressive rock at the time and fits the film perfectly.
The problem is that the visuals overcome what plot there is, and the allegories about racism, animal abuse and classism are heavy-handed.  It may be animated, but it suffers some of the same problems a lot of French cinema does - little attention to plot, too much emphasis on trying to be artistic and a rushed ending once it’s remembered that there has to be a plot.  It may be pleasing to French sensibilities and American critics that are afraid they won't be invited to parties if they complain, but a little bit of that goes a long way.  There are plotless films (Un chien andalou comes to mind) that work, but ostensibly Fantastic Planet is supposed to show us two vastly different species being forced to work together for survival, and at least in the film version there is little of this until the finale.
Truthfully, this would have probably worked better as such, as the whole affair works better as a visual and audio experience than it does as a traditional movie.  It is quite short, and it does leave me to wonder if Czechoslovakia hadn't had troubles at the time if it would have been longer and incorporated more of the book's plot, as well-worn as the savior rising from nothing theme is.  I believe if one approaches Fantastic Planet in that matter they may get more enjoyment from it than I did, and I can see how the audiences that saw it in 1973 were probably more interested in viewing it in an altered state rather than any story it may contain.
Fantastic Planet (1973)
Time: 72 minutes
Starring: Jean Valmont, Jennifer Drake, Jean Topart
Director: René Laloux