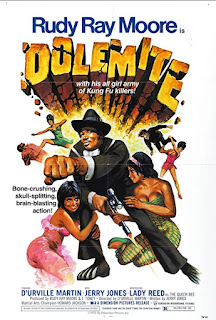 Rudy Ray Moore is an entertainer who really should be more of a household name.  A decent R&B singer, he released a few singles in the 1960s before the reality came that he wasn't going to make it in the world of music.  Eventually he turned to comedy, combining music with his routines in a way which anticipated hip-hop.  Though independently released, and with covers and content that was guaranteed not to get radio play or mainstream distribution, his comedy records managed to do reasonably well and chart on the Billboard Top 200.
One of the characters from his routines was Dolemite.  An exaggerated example of Black macho culture, Dolemite was pimp, gangster and storyteller.  It was based on older traditions and, if the movie Dolemite Is My Name is to believed, was "borrowed" from a homeless man who used to frequent a record store that Moore worked at.  Wherever it came from it became a central theme to Moore's routines and, ambitiously, the subject of a movie he wrote, financed and starred in.
Dolemite (Moore) is in prison, framed by a rival pimp named Willie Green (D'Urville Martin), who has the mayor (Hy Pyke) and the corrupt cop Mitchell (John Kerry) in his pocket.  The warden of the prison enlists Dolemite and his partner Queen Bee (Lady Dee) to break up this corruption and bring peace back to the streets of the city.  While constantly harassed by Mitchell and his partner, Dolemite and his army of kung-fu dancers/hookers work to bring down Green as well as re-establish his own empire.
That is really about all there is to it.  While it may seem strange for a pimp to be cleaning up the streets by pushing out another pimp, it follows many of the blaxploitation tropes and ends up fitting in perfectly with the movies that came before it, even if it does show up a bit late to the scene.  There is nothing too special about the plot; what is special about the movie is Rudy Ray Moore and his cast of characters and how, despite everyone telling him he was throwing his money away, the movie turned a decent profit at the time and became a classic of the genre.  Although a lot of liberties are taken and a lot of the funnier scenes shown happen in the sequel, The Human Tornado, Dolemite Is My Name pretty much covers how Moore got this movie together.
The result is a bit different than what is shown in the Eddie Murphy film.  Honestly, The Human Tornado is played more for laughs, and had a better director.  D'Urville Martin, though a respected black actor at the time, makes his directorial debut on this movie.  He's fine as Willie Green but, even though some of the other people Moore hired to do the film had some idea how to do the film, a combination of alcoholism and just generally not caring lead to some awful decisions.  I'm not talking about boom mics; that problem had nothing to do with direction, but with the fact that the pan and scan version of Dolemite released on home video had the wrong aspect, and because of that equipment and crew was visible.  The current Blu-Ray version available returns the movie to its theatrical aspect, alleviating that problem for the most part.  It's still a low-budget film, so mistakes do happen occasionally.
The biggest problems are not what accidentally got into the shot, but often the shots themselves.  One has Green leaving the mayor's house, with the rear-end of another car taking up the lower left of the shot.  It's a lingering, steady shot, making it worse, and as a photographer it was frustrating me to no end.  Even if Martin didn't know what he was doing, his director of photography should have known enough to say it had to be reshot; after all, it's just a scene of the bad guy leaving a house.  Better yet, it's not even needed, nor are a number of other shots of going from one place to another.  These are there to pad out running time, but typically just slow a movie down.  There are also several editing mistakes that are quite noticeable due to jumps in the film, particularly during some of the sex scenes.  Even worse, during the filming of a band in Dolemite's club (with a dance act that goes on forever), there isn't even an attempt to do accurate lip-synching.
Despite all this Moore's performance shines through, and it's often best at times when the movie takes a break to let him do parts from his act.  It is also notable for a performance by Vainus Rackstraw as Creeper, also known as the Hamburger Pimp.  Rackstraw was supposedly found on the streets of Los Angeles and hired when none of the acting students working on the film fit the bill for the character.  It's a short but memorable performance that, while meant to be a character one would see in a Black neighborhood, unintentionally carries some weight as one wonders how much of Rackstraw's performance is acting.  Also quite memorable is Lady Dee, who often partnered with Moore in his comedy acts, as his madam and partner Queen Bee.
Dolemite is a bit of a frustrating watch because Moore gives it his all, making the thin plot and amateurish film making much more enjoyable than it should be.  On the other hand, D'Urville Martin's directing will often have members of the audience frustrated.  On even another hand, the silly fight scenes (I believe Dolemite is so strong he can knock someone over from the wind of his fist passing a foot from their face) and over-the-top acting are entertainment in themselves.
Dolemite (1975)
Time: 90 minutes
Starring: Rudy Ray Moore, Lady Dee, D'Urville Martin
Director: D'Urville Martin