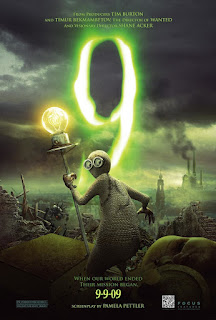 9 was supposed to be a foray into animation for adults, but from what little I remember of the advertising that would have been difficult to understand.  In all honesty I was just surprised when I watched this that it wasn't a Disney or Dreamworks film.  Instead, it was the first movie made by a studio called Focus Features, who followed this up with the more well-known (and well-received) adaptation of Coraline.
Originally made as a short film by writer and director Shane Acker, 9 is set in a post-apocalyptic world where a fascist human government was wiped out when the machines they created revolted against them.  The machines didn't fare much better, and it is into this world that 9 (Elijah Wood), a mechanical ragdoll creature with parts made out of household items, comes to life.  Confused and afraid, he soon meets 2 (Martin Landau), a creature similar to him.  They don't get much of a chance to become acquainted before they are attacked by a mechanical beast, which carries 2 off to an abandoned factory.
9 is rescued by 5 (John C. Reilly), much to the chagrin of their leader 1 (Chrisopher Plummer), who has created a sanctuary for the other mechanical dolls in the ruins of Notre Dame Cathedral.  When 9 and 5 go off to rescue 2 from the beast, 9 sets off a series of events surrounding a mysterious device he woke up with, and which may have have significant consequences the re-emergence of life on Earth.
It is a pretty epic concept.  Unfortunately, some of the mysteries surrounding what happens are both predictable and predictably farfetched.  9 has a rushed feel, making it hard to latch onto the story and have any emotional investment.  This isn't helped by a rushed ending that doesn't make too much sense as a conclusion, considering the state the world is in.
The voice acting is okay, and considering that in addition to the above Crispin Glover and Jennifer Connelly also offer their talents it should be.  The animation is a mixed bag, with the Beast, the mechanical pterodactyl creature and a hypnotic clockwork snake all being well-done creations, and frightening enough to younger kids that it got the movie a PG-13 rating despite there not really being anything else too adult about it.  The Brain, the central machine that creates the others, is also well done.  Where it flounders is when showing any old footage with humans; they all look like computer animations from Playstation Games from the 1990s.
I do give credit to Shane Acker for trying something new, but while he has a good visual eye this doesn't extend to storytelling or character building.  It is another in a long line of cartoons made to try to break the mold of animation being limited to a younger audience, but once again leaves much of what makes an involved adult story behind while not being brave enough to totally abandon the need to still appeal to kids.
9 (2009)
Time: 79 minutes
Starring: Elijah Wood, John C. Reilly, Jennifer Connelly, Martin Landau, Christopher Plummer
Director: Shane Acker