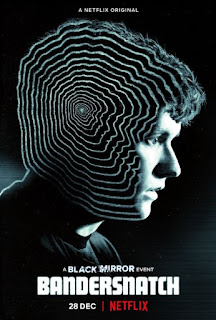 I discovered the Black Mirror television series due to an episode of The Orville that had been similar in theme to one of its episodes.  They were obviously not copies of either, but largely a reflection of fears of social media and modern American life.  It was the first time I had found an anthology series in years that did what The Twilight Zone and Tales from the Dark Side did so well: take modern societal concerns and take them to extremes to great effect.

Like most fans I have been waiting for the newest season, and so far what we got is a movie event.  Not only that, but it takes it a step further, making the movie interactive.  As predicted with modern media criticism, the fact that it does not reach some sort of pinnacle of perfection has made it an immediate target for hate and derision from a number of critics, which I hate to say is largely because most of them really got so involved in the gimmick that they didn't realize what the movie itself was trying to say.

Stefan Butler (Fionn Whitehead) is a young programmer trying to break into the game market of 1984.  The game he is working on is an adaptation of a choose-your-own-adventure fantasy novel called Bandersnatch.  Butler's attachment to the book is that it is one of the few memories he has of his mother, who died in a train crash when he was five years old - a death that has affected his life since, and which he often blames himself for.  The problem with the novel is that the writer, Jerome Davies (Jeff Minter) is less known for his literary work than for his deteriorating mental state culminating in removing his wife's head.

Stefan himself is not without many problems, resulting in anti-anxiety drugs and existing under the careful watch of his father (Craig Parkinson) and psychiatrist Dr. Haynes (Alice Lowe).  He begins to break free from their influence upon meeting his hero Colin Ritman (Will Poulter), a popular programmer working for the company, Tuckersoft, that wants to produce Stefan's game.  His friendship with Colin begins to open Stefan up to new takes on reality.

The problem is that this reality seems to hint that Stefan's life, rather than that being of free will, is controlled by some outside force that is telling him what to do.  Several possibilities present themselves - his father, his psychiatrist, or some unseen puppetmaster - all leading to a myriad of timelines, dream states and conclusions for various versions of Stefan and those around him.

Going into the story I was afraid that the interactive part would be a barely passable gimmick, similar to those William Castle used to put butts in seats (and tingle them) in the 1960s, or the interactive television programming from the movie version of Fahrenheit 451. Still, despite a few slight episodes (something that should be expected in any anthology series, be it print of other media), I've learned to trust creator and writer Charlie Brooker to at least make Black Mirror interesting.  Happily, he went further into the interactive portion than I would have expected, making it less the choose-your-own-adventure movie it appeared to be and involving the viewer as an unseen actor in the movie.

This is important because in some ways this is a tribute to Philip K. Dick and his belief that he was being given messages and, in some ways, controlled by an alien satellite called Valis.  This has appeared in a movie of its own, an adaptation of Dick's Radio Free Albemuth.  In this case as the proceedings go on the viewer becomes more participant than voyeur, even if it seems that some choices are still limited and not exactly what we want to choose - leading to more of the point of the movie itself.  If we are controlling Stefan in many ways, but with limited choices, then who might be controlling us and limiting our choices?  Is free will an illusion and are we just another avatar in a game where someone is playing us over and over again trying to get to the best ending?

Bandersnatch, like a video game, pretty much encourages you to do such a thing.  And, no, it doesn't always work seamlessly, but I would consider 95 percent success in something like this to be much better than expected.  My major criticism, although it seems to be a section that many people actually like, is choosing at one point to communicate with Stefan and try to explain what Netflix is.  It leads to some interesting options, but it also takes the viewer too far out of the story.  It is somewhat redeemed by the option going away as you re-do timelines, with even stranger options replacing it, as if you are controlling Stefan's dreams and fugue states.

Then again, the Netflix option does introduce some needed humor to the proceedings, so perhaps I just got too wrapped up in the main story and its implications.  However you feel about it, it is important to experience it to whatever end you can, as it seems there is a true ending as you go further down the rabbit hole; the running time is approximate, and it is possible to be done with the whole thing in about 20 minutes if you jump out after reaching just one "ending."  With me, I went a bit over the stated 90-minute run-time, but following the different loops (which, again, have subtle changes as you go back through them) was rewarding with an ending that truly tied up everything in a satisfying, although not happy, conclusion.  There may be some pushback on that, but it is quite in line with the typical Black Mirror universe, with an interesting coda.

The acting from all the leads is in line with what you expect from the series, with Will Poulter standing out and practically stealing every scene with his withdrawn, deadpan portrayal of Colin.  The game that Stefan is creating looks convincingly like something I would have craved back in 1984, with 3-D vector graphics that would have been stretching my poor Commodore 64's capacity.  There are also the usual callbacks to other Black Mirror episodes.

Now that this type of movie has been done, I can't say I would relish it being repeated unless there was something fresh that could be done with it.  3-D movies have been around for nearly a century and few of them have found a way to do anything original or exciting with the format, and I doubt interactive films would be any more successful.  In fact, Black Mirror: Bandersnatch takes the idea to a logical extreme, and really does about all that can be done with it.  If I am wrong I will be pleasantly surprised, but this was a successful, and thought-provoking, experiment.