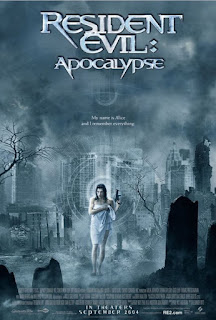 Resident Evil ends with Alice (Milla Jovovich) and her potential love interest Matt (Eric Mabius) being dragged away by the Umbrella Corporation for experiments.  He is mutating, so he is thrown into something called the Nemesis program, while Alice wakes up alone in a laboratory, escaping only to find Raccoon City virtually abandoned and left to the dead.

Resident Evil: Apocalypse picks up during the time that Alice is under, with a devastating heat wave hitting the city in addition to a wave of people succumbing to the T-Virus, changing into zombies and attacking their loved ones.  In response, Umbrella has a number of scientists evacuated, including the originator of the virus, the wheelchair-bound scientist Charles Ashford (Jared Harris).  While evacuating, his daughter Angie's (Sophie Vavasseur) transport is involved in an accident, leaving her trapped in the city after Major Cain (Thomas Kretschmann) walls the urban center in and prepares to cleanse it with a nuclear weapon.

Both groups are contacted by Ashford with promises of aiding them in leaving the city before it is "cleansed," and soon come together.  Unfortunately, Cain is on to them, and is eager to see both Alice and Nemesis in action.  Meanwhile, another shadowy figure in the form of Dr. Isaacs (Iain Glen) can't wait to get his hands on whoever is the victor.

Paul W. S. Anderson was busy doing his best to drive nails into coffin of both the Alien and Predator series by being the one to bring Alien vs. Predator to the big screen, so he merely wrote the script of the second Resident Evil film.  While Anderson is actually a good visual director, unlike the more generally maligned Uwe Bohl, it's safe to say few of his scripts really go far beyond being a framework to hang action scenes on.  Unfortunately, first-time director Alexander Witt offers a mixed bag when it comes to the visuals, frustratingly showing the early zombie scenes in blurry slow motion, in a similar way that extremely cheap direct-to-video movies often do.

The first half of the film is largely the characters spouting a few cliched lines while trying to look cool, while moving from scene to scene.  The only real tension that arises in the first half is the encounter with the Lickers in the church.  Where this would typically be a time to at least build the two dimensions each of the somewhat disposable characters should inhabit, no time is really spent in that manner.  Secondary characters begin to die off largely before you can even put a name and a face together.

Things do improve as the film goes along and Witt seems to figure out how to properly film what is going on.  This starts with the first appearance of Nemesis.  Wisely this was done with a giant suit (although I'm sure Matthew J. Taylor would probably disagree after being stuck in it) that featured a great, memorable design.  Surprisingly, although it is awkwardly presented, he is used effectively in his final battle with Alice.  In a better movie it would have become an iconic creature design.

Milla Jovovich again does a number of her own stunts, with a vertical run down a building combining footage of both her and her double.  This is probably the best thing I can say about Alice, since there is really nothing done to develop her further from the first movie, other than Umbrella's experiments on her with the T-Virus making her into a super soldier.  She shows a little emotion when she realizes that Nemesis is Matt, but other than that she just does superhero things and generally saves the day.

Jill Valentine would be a more interesting character, and it seems like Sienna Guillory is trying to make her so.  Unfortunately, almost anything that gives her backstory seems to have been edited out, leaving her to do little more than a tough cop impersonation (or to be Alice lite) while running around in a skimpy blue dress.  Terri is given even less to do other than be someone that happens to bring a camera along.

Beyond that the rest of the characters aren't given much to do except decorate the scenery - or the walls.  Oded Fehr, as Carlos Olivera, becomes somewhat of a main character as the movie goes along, but the rest of his team gets chomped on rather quickly.  Peyton is Jill's partner, but spends most of his time dying as well.  L.J. comes out okay, but unfortunately Mike Epps doesn't get to do anything with the character except be a stereotype.  Yes, he gets one of the best lines in the movie, but it would be nice to have a civilian African-American in an action film not be some sort of street hustler.

I think most people who consider this the best movie of the series are largely concentrating on the last half of the film, with Nemesis and some decent action set-pieces.  Otherwise, the original Resident Evil tends to be the superior to this in every way.  The original at least had a certain atmosphere and a minute amount of character building - something that the sequel doesn't even bother with.  It's definitely not a terrible action film - live stunts and practical effects go a long way toward making this more watchable than had it been a digital mess - but it doesn't save it from being a shallow experience, even for a movie based on a video game.