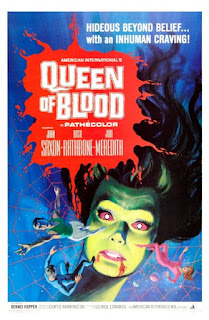 Roger Corman was known to spare no expense when producing movies.  And by that, I mean that if any of his up-and-coming filmmakers asked him to spare a dime, it was doubtful they would receive a nickel.  Despite making a number of great movies, Corman always looked at it as a business venture rather than an artistic one.  He just happened to be pretty good at both ends.

American International, the company that he worked with almost exclusively in the 1950s and 1960s, managed to acquire the rights to some highly-regarded Soviet science fiction movies made at the time.  Soviet films were never known to be high-budget affairs themselves unless whoever was in charge decided they had to try and trump some American blockbuster, but the films they purchased had some of the best special effects of anything coming out at the time.

Of course, just releasing these films as intended during the Cold War era was not going to fly, as they contained their share of anti-American propaganda.  Instead, the effects were incorporated into completely new movies.  After all, why spend a bunch of money on expensive models and other effects when someone has already done that for you?

The results, as can be predicted, were cheap matinee fair: Battle Beyond the Sun  and Queen of Blood.

It just so happened that, despite the obvious cost-cutting measures and the fact that Corman couldn't care less about the quality of the movie as long as it made a profit, writer and director Curtis Harrington decided to do what he could to at least make something of the frankenpicture he was handed.

In the year 1990 humans have established permanent space stations and colonized the moon, and are planning on spreading out to the rest of the solar system.  When they receive a distress call from a crashed alien vessel on Mars, the International Institute of Space Technology figures it would be a good time to test out the new technology, as well as benefit from a first contact scenario.  Dr. Farraday (Basil Rathbone) is put in charge of the project, while astronauts Robert Boon (Anders Brockman), Paul Grant (Dennis Hopper) and Laura James (Judi Meredith) are sent on the mission to rescue any survivors.

While en route in their ship, the Oceano, the vessel is damaged by a sunburst.  They do make it to Mars, finding the crashed ship has been abandoned.  In desperate need to find where the escape pods may have gone, and not having time to properly get a satellite in orbit, a second ship called the Meteor is sent to land on Phobos and manually launch the satellite.  The second ship happens to contain Laura's boyfriend Allan Brenner (John Saxon) and another astronaut, Tony Barrata (Don Eitner).  To Allan and Tony's surprise, they happen to find the escape ship on Phobos itself rather than on the planet's surface.  However, the Meteor is only designed for two people, and Tony ends up getting left behind after the two discover the loan survivor from the crashed ship - a strange, green-skinned woman (Florence Marly).

With Tony able to last until rescue comes, Allan joins the crew of the Oceano with the survivor and they begin the journey back to Earth.  Unsure of what to feed the newcomer, they first give her water, but she refuses any other nourishment.  An attempt to take a blood sample is violently rejected.

Unfortunately, they soon find out her main source of food when Paul is attacked and found drained of blood, with the alien woman retreating to her quarters full and happy.  Boon decides to prevent any further deaths that they provide her with the plasma they have on board, but when they run out he becomes the next victim.  Allan and Laura tie her up, but she uses pyrokinetic abilities to burn through the ropes and attacks Allan.  Laura is able to save him just in time, but scratches the alien in the process.  The woman screams and runs away, only to be found dead shortly after.

Another discovery is made as they prepare for their return to Earth: the alien has infested the Oceano with her eggs, potentially opening up the possibility of humanity being overrun by the aliens.  Allan wants to destroy them all, but Laura argues against it.  The ultimate decision may determine the fate of the human race itself.

The footage used for the special effects are from The Sky Calls and A Dream Come True, the latter from which the plot was developed.  Just, instead of peaceful aliens wanting to meet us and getting into trouble, we have blood-thirsty creatures who want to infest our planet.  The effects that are used are great, and in this day and age provides some encouragement to seek out the original movies.  The effects that were added in the states largely boil down to some makeup and surprisingly good gore effects, as well as one of the worst Jell-O molds to come out of the 1960s.

John Saxon gets to play the square-jawed hero for this one, and he does he does well with it.  Dennis Hopper supposedly couldn't take any of it seriously, but he at while in front of the camera he does his best.  If you're expecting his normal level of crazy, though, you will be disappointed.  Veteran actor Basil Rathbone is here to lend some gravitas, and as can be expected he does his part well. The rest of the actors, including Judi Meredith, are there largely to inhabit the stock roles for a '60s science fiction potboiler.

Largely that is what Queen of Blood is, although it has been mentioned as another influence on Alien.  Really, about all the influence there is that there is a killer creature on board the ship and it's headed for Earth and potentially a danger to the planet.  It has been done to death, but it is still during the journey back that the movie picks up steam, as at this point Curtis Harrington has backed off on reusing pre-existing shots and building some tension within the claustrophobic confines of the Oceano itself.  It really helps that he argued for Florence Marly, a veteran actress who is both attractive and coldly menacing, for the part rather than just busty blonde in a leotard.

Queen of Blood is not the most creative or well-made movie of its time, but it still manages to overcome its limitations and its cheap origins.  It is also interesting to see a couple of name actors in early roles.  It is also, after all these years, available in a watchable print, which should be a relief to anyone who remembers the scratchy, washed-out version from Saturday mornings on independent television stations.