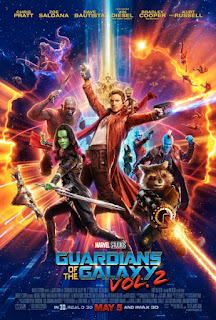 Another year, another clutch of special effects extravaganzas from Marvel and Disney.  And, typically, movie after movie introducing new characters and following the time-warn origin formula.  Such is assembly-line film making and, although a number of Marvel movies stand out, the method in which they are made is starting to wear thin on the audience.

In fact, it was wearing thin back when the first Guardians of the Galaxy movie came out in 2014.  That's what suddenly made that movie so special: it didn't take itself seriously, waste its time on complicated backstory to give it an edge or overwhelm the film with unneeded cameos.  It was a rollicking sci-fi fantasy adventure comedy with great music and a cast that worked well together, even if two of them were CGI characters.

Of course it is ridiculous to expect the same thing to happen twice.  Either the sequel was going to feel a little like it was trying too hard to be the first movie or it was going to try to build on it.  While Vol. 2 is not as good as the first one, happily it did the latter, and without changing too much or becoming as bland as much of its Marvel brethren.

Peter Quill (Chris Pratt), aka Star Lord, his second-in command Gamora (Zoe Saldana), temperamental Rocket Raccoon (Bradley Cooper), exiled warrior Drax (Dave Bautista) and Baby Groot (Vin Diesel) attempt to protect some precious batteries from an interdimensional monster.  They are of course successful, and are brought before the High Priestess Ayesha (Elizabeth Debicki) for their reward - which consists of being presented Gamora's sister Nebula (Karen Gillan), whom the Guardians intend to deliver for incarceration.

Unfortunately, Rocket gets sticky fingers when it comes to the batteries they were supposed to protect, and Ayesha sends her fleet after them.  Seemingly about to have their ship destroyed, they are suddenly rescued by a strange man riding an egg-shaped vessel.  They manage to jump and crash-land, and soon find out the man is Ego (Kurt Russell), who happens to be Quill's father.  Quill agrees to accompany Ego and his companion Mantis (Pom Klementieff) to his home planet, along with Drax and Gamora, while Rocket and Baby Groot stay behind to repair the ship.

Ayesha, however, isn't done with them, and hires Quill's former stepfather Yondu (Michael Rooker) to track them down.  He does so successfully, but most of his crew is incapacitated by Rocket's booby traps.  Still, he manages to capture them, but faces problems of his own.  Yondu, due to some of his activities, is on the outs with the Reavers and a good portion of his crew thinks he is going soft.  A mutiny led by Taserface (Chris Sullivan) leads to the death of most of those that support Yondu, with the blue guy being locked up.  However, with Groot's help, they are able to escape and head to Ego's planet to rejoin the rest of the Guardians.

Quill finds out that Ego is, in fact, a Celestial.  He came to being as a giant brain, and his planet formed around it.  The body that is that of his father is an avatar, and must return occasionally to the planet.  Peter also turns out to have many of Ego's powers, and thus the father begins to train and prepare the son.  Predictably, things are not as they seem.  When Yondu captures Rocket and Baby Groot, Nebula is released by the mutinous crew, and leaves on her own to find and kill Gamora.  While she attempts it, a cave is discovered with millions of remains.  It turns out that these are also Ego's former kids - the ones that did not rise to the level he wished.

Peter is not happy about this revelation, nor others regarding his mother and Ego's ultimate plans for the universe.  With Yondu arriving just in time, the Guardians make plans to stop Ego once and for all.  As always, things get complicated, as Ayesha tends to carry quite the grudge.

Since Groot was such a favorite in the first movie, it is no surprise that his sapling gets some of the funnier parts of the movie.  Rocket also gets fleshed out a little, but Yondu is the one that really comes as a surprise.  Michael Rooker's character had a bit part in the original movie, but many of his motivations are revealed this time around.  It's a great part fleshed out by a veteran character actor, and his part provides a dramatic counterpoint to the comedic aspects of the film.

Drax continues his exploration of humor, often times failing miserably.  While his character doesn't change much from the first movie, we do learn more about his society.  Other than healing relations somewhat with her sister, Gamora is not really developed too much, and neither his her relationship with Peter.  Zoe Saldana is largely there to look pretty and beat things up this time around.

Strangely, as he is supposed to be the main character, Star Lord isn't developed too much, either.  There is the revelation of who his father is and why Yondu kept him on, but Chris Pratt doesn't do much more than play the square-jawed hero.  It may be why this movie seemed a bit strange at times.  Many of what would be considered auxiliary characters carry the movie, while the two central figures mainly fill in where the action is needed.  Even Nebula gets some growth and motivation toward her own goals.

As for the villains, Kurt Russell plays Ego much the way he played Stuntman Mike in Death Proof.  Russell is great as a villain and an anti-hero, and plays it well, but like most Marvel bad guys all he really does is reveal his evil plan and proceed to get his butt kicked.  Ayesha is much more interesting, and even more dangerous, than Ego, as she is backed by her entire race is getting revenge for what, on a cosmic scale, is a small slight.  Elizabeth Debicki is icy and intimidating, and has the dangerous edge that is missing from Ego.

While Guardians of the Galaxy is supposed to be a bit more of a comedy than a straight science fiction or superhero film, I do give it a lot of leeway.  Unfortunately, the special effects this time around are even more cartoonish - that is when it doesn't look like a video game.  The 700 jumps sequence was one of the worst I have seen in a movie in a long time, with faces stretched in a Looney Toons manner.

Guardians of the Galaxy, Vol. 2 is colorful, entertaining and often quite fun, even if it doesn't reach the heights of its predecessor.  I am just hoping that the next one gets back to concentrating on its main characters, since good music and pretty colors isn't going to carry the series forever.