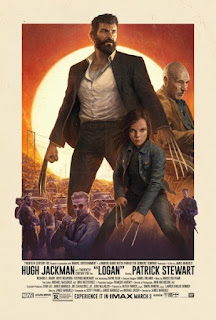 In recent years we have been inundated with the origin stories of superheroes, over and over.  Often, in the cases of Batman and Spiderman, we have endured the same story numerous times as the series seems to get rebooted about every couple years or so.  Unless you are Thor or Deadpool, though, your superpowers do not ultimately make you immortal.  So, what happens when it's time for the hero to meet their end?

Wolverine, for all intents and purposes, was thought to be immortal, as he was given an adamantium endoskeleton and superior healing abilities.  Unlike the other mutants of the X-Men, he was manufactured, largely to be the first in a line of supersoldiers.  Still, immortality is a very difficult thing to achieve, and even Logan himself must succumb to the side-effects of what was done to him.

In 2029, Logan (Hugh Jackman) is slowly dying from being poisoned from the very substance that made him the unstoppable weapon he originally was.  He drives a limousine, earning just enough money to care for Professor Charles Xavier (Patrick Stewart), who is himself suffering dementia.  This means that Xavier must be kept far from civilization, in this case an abandoned water tower in the middle of nowhere in northern Mexico, just south of El Paso, Texas.  No longer able to control his mental abilities, Logan brings him medicine to keep them in check, as they have a tendency to become deadly otherwise.  While Logan is away, former mutant tracker Caliban (Stephen Merchant) is left to look after him.

Most of the mutants are dead by this point, and Logan himself is making sure to keep a low profile and Charles's continued existence a secret.  He finds out that he has not been as careful as he could when he is contacted by Gabriela (Elizabeth Rodriguez), who is in care of a seemingly mute girl named Laura (Dafne Keen).  Gabriela asks for help, which Logan initially refuses.  Shortly after being contacted by Gabriela he runs into Pierce (Boyd Holbrook), the man that is pursuing them, who offers money to turn the woman and girl in.

Tempted, as the ultimate goal is to get a ship and take Charles far out to sea where he can live out the rest of his days, Logan ultimately decides to help once he finds Gabriela dead in her hotel room and retrieves recordings that show that Laura is part of a covert program to breed new mutants from the stored DNA of the previous mutants, including Logan.  It turns out that Laura is genetically his daughter, and has had the same adamantium treatment as he did.  She has also been telepathically communicating with Charles, and comes to the hideout for safety once Gabriela is dead.

Unfortunately, Pierce shows up as well, with this private army in tow.  Laura is insistent that she go to a place in North Dakota known as Eden, which her and the other children that escaped from the Mexican hospital where the experiment was being conducted read about in X-Men comic books.  Their home compromised, Logan agrees to take her, and brings Charles with him.  Caliban is left behind and tortured by Pierce into tracking the three.

The trio make it to Oklahoma before being cornered by Pierce's army in a casino, where they are saved when Charles has one of his fits.  Logan is able to withstand it and get them out, but Pierce is convinced to bring in another experimental soldier, X-24 (Jackman), who has been conditioned to high aggression and obedience, much like Logan was in the original Weapon X program.  After helping Will Munson (Eriq La Salle) and his family after they are run off the road by an automated transport truck, they reluctantly take refuge with them, with Logan going so far as defending Munson against the head of a corporate farm that has been trying to run Munson off his land.  Unfortunately, he is not able to protect them, or Xavier, when Pierce sets X-24 loose.  He still manages to escape with Laura, though seriously wounded, thanks to Caliban's quick thinking.  He also finds out that the man behind the covert project is Dr. Rice (Richard E. Grant), the son of the original scientist at the heart of Weapon X.

Despite their differences, Logan and Laura manage to make their way to North Dakota, where she and others that escaped the hospital make plans to escape across the border into Canada and political sanctuary.  Rice and Pierce are close behind, trying their best to make sure that doesn't happen, and Logan finds it within himself to be a hero one last time.

I have to say that I never saw X-Men Origins: Wolverine or its sequel, Wolverine, which was also directed by Logan's James Mangold.  In fact, this is the end of that particular series, but feels more in line with a way of tying up the original X-Men series.  It feels more like a true sequel to X-Men: Days of Future Passed than X-Men: Apocalypse did.  Logan places Wolverine and Professor X within a real world much more successfully than the previous movies before it.  Mangold wisely uses natural colors, avoiding the tints and filters that most directors overuse these days.  The world looks lived-in, and is in fact supposed to be the U.S. in another cyclical economic downturn.  The technology also does not seem unrealistic for a bit more than a decade down the line.

I must say that I never saw either of the other Wolverine films, largely dropping out of the series after X-Men: The Last Stand due to how awful it was, and not discovering it again until Days of Future Passed.  That may skew my view, but Hugh Jackman is allowed to do more than just brood, be jealous and slice things up.  He's no longer a comic character, but an old soldier protecting the only father figure he ever had.  Happily, punches weren't pulled, and we get an R-rated superhero film that is not only serious science fiction, but a study on the realistic implications of living in the world they do.  I am sure that Jackman is happy that his time as Logan is coming to an end, as it is obvious he has more than enough talent to bring to other roles.

Patrick Stewart is great as well, with Charles largely coming to grips with his failing health and his ultimate role in the reason that many of the old X-Men perished.  He is at this point a broken man, but is delighted to see that what he tried to do for mutants may live on with Laura and others like her.

Dafne Keen portrays Laura as having many of the same anger issues as her genetic father.  It's not so much the brooding pre-teen role we usually see, but instead a girl that has had to grow up too fast and was considered property rather than an actual human being.  The truths about her come out slowly, and Keen does a great job in selling a role that could have been little more than just the usual "package" the protagonist has to deliver in road movies.

Caliban is played by Stephen Merchant this time around, and he is not only resourceful, but in the end also loyal to Logan and Charles.  Despite heavy torture, he makes sure that Rice and Pierce are always a step behind.  For their part, Boyd Holbrook plays Pierce as the typical amoral mercenary, where Richard E. Grant is the true villain behind everything.  As usual, the villains are the weak point in the story, never having much more motivation than the goals in front of them, but at least in this case they are humans instead of some "unstoppable" cosmic force.  In fact, in terms of being relentless, they are better at their job than most of the big baddies the X-Men have had to fight in the past.

Logan lives up to the reputation that it has, and James Mangold did something special in growing the superhero genre up.  I just hope that we don't end up with rote ending stories the same as we do with the origin films.  And, also, this is probably not the best movie to put on if you are in the mood for more escapist sock'em-up entertainment.  It is a true drama about age and mortality, and maintains a bleak tone throughout despite the hope that that the children may represent.