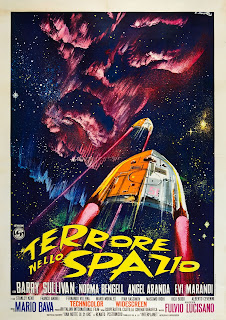 Mario Bava was a pioneer in many genres, but largely in horror and giallo.  It is understandable why he usually worked, with some exceptions, within those genres.  Even if you were Federico Fellini, your budget was still largely what you could scrape together and heavily dependent on the success of your other films.  It may seem like Italy has churned out a massive amount of movies since their industry recovered after World War II, but the truth is many of them depended on ambition and ingenuity much more than cash.

Science fiction, typically, is something that you need a little bit of the filthy lucre sitting around to do successfully.  While some of the best moments in horror films can be achieved by what you decide not to show (or what you have to do to hide a dodgy effect), science fiction by its very nature involves showing.  That's why we end up with a range of success over the years.  For every stop-motion saucer animated by Ray Harryhausen, you end up with a flying turkey monster puppet.

It is to Mario Bava's credit that he pulled off a classic science fiction thriller on a budget that probably couldn't even buy the aforementioned puppet.

In response to a distress signal from the unexplored planet Aura, the ships Argos and Galliott are dispatched to make first contact.  Long thinking they were the only beings in the universe, they are excited to see if the signal is real or just a natural phenomena.  As they approach the mist-enshrouded planet, Captain Markary (Barry Sullivan) of the Argos is cut off mid conversation with his younger brother Toby (Alberto Cevenini), who is aboard the Galliott.  Sanya (Norma Bengell), Markary's communications officer, tries desperately to get them back on.  Suddenly, the Argos experiences a severe gravity shift and is drawn toward the planet.

While most of the crew is rendered unconscious due to the crushing gravity, Markary manages to keep his grip and switch the ship to manual control.  Just as he does, the gravity effects cease and the ship is brought to rest on the planet's surface.  As the crew awakes, they suddenly begin to attack each other.  Markary escapes this state due to clinging on to consciousness and begins to regain control over most of his crew before they can cause serious harm, but not before Dr. Karan (Fernando Villena) walks himself out the airlock.  Luckily for him, the planet's atmosphere is breathable, even if it is a harsh landscape consisting of volcanic mud marshes, mists and strange rock formations.

The crew soon discovers that the Galliott landed nearby and go to investigate, finding that the entire crew killed each other, as there was no one able to stop their mass insanity after the ship landed.  Markary is upset about the death of his brother and the others, but his larger concern is getting his ship and crew off the planet.  Luckily, the Galliott's asteroid rejector is still intact, as the one on t he Argos was damaged, and the large number of rocks in the vicinity of the planet pose a danger even after general repairs can be completed.

They soon discover that they are not alone.  The recently buried bodies of the Galliott crew soon rise and attack Eldon (Mario Morales), the crew member left to guard the ship.  Soon, other bodies from the Galliott, and members of the Argos that are killed by them, begin to rise as well.  Wes (Ángel Aranda), the ships engineer, believes he may have found evidence of what is causing the strange events when he spots a ship in a valley.  Markary and Sanya go to investigate along with fellow crewman Carter (Ivan Rassimov), finding an alien vessel that was piloted by giant alien beings, all of which are now skeletons in various positions of violent death.  Despite being on the surface for hundreds, or perhaps thousands, of years, the ship still has reserve power and some of its security features still active, which almost results in Markary and Sanya being suffocated, while Carter vanishes.

They escape and return to the Argos and find that two of the Galliott's crew they thought dead.  By this point medical officer Tiona (Evi Marandi) has been trying to convince the rest of the crew that what she is seeing is real, and they soon discover that the men they brought on board are in fact dead, but possessed by alien intelligences.  Their goal is to abandon the dead host bodies and join in a symbiotic relationship with the living crew members, travelling back to their home planet to escape the death of their sun and their world.  In order to force the union they steal the asteroid rejector and take it back to the Galliott.

With Wes largely having the ship back in working order, Markary leads an assault on the Galliott, managing to return with the rejector but losing all of his remaining crew, save for Sanya, in the process.  The ship leaves the planet, but Wes suddenly becomes concerned that the threat may not have been left behind as Markary and Sanya begin to act strangely.

There were many influences to Ridley Scott's original Alien, largely the '50s science fiction film It! The Terror from Beyond Space.  Besides straight horror films, one of the other major influences was this movie.  While the xenomorphs from Alien were neither intelligent nor symbiotic, there is another memorable portion of the movie before the title character bursts onto the scene.  An exploration of the planet Acheron finds a giant ship with a skeletal figure nicknamed by fans as the "space jockey," and later elaborated on in Prometheus and Alien: Covenant.   Both the design of the alien and his ship are dead ringers for the alien ship in Planet of the Vampires.

It should be mentioned here that there are, in fact, no vampires.  The original title of the film was "Terror in Space", which I guess American International thought too generic for U.S. audiences.  While a nice exploitative title in the 1960s would have got butts in seats for the Saturday matinee, it unfortunately has the effect of making modern audiences fear they are going to sit through something they would normally see on Mystery Science Theater: 3000.  Nothing can be further from the truth.

Despite having next to no budget, and almost literally filmed the whole thing on a small set.  He even admits that he did it with two rocks, a ton of dry ice smoke to obscure the worst aspects of the set and a number of mirrors placed to provide optical effects on camera.  The effects were achieved with use of the mirrors and forced perspective, all done while filming, as Bava couldn't even afford green screen effects.  Although to modern eyes it is obviously a set, and the scale in a number of shots definitely seems off, he managed to create a strange and memorable landscape.

The ships have a lived-in look, while once again the uniforms convince me that if we ever do get a chance to do a first-contact scenario that our entire space fleet should be outfitted by a designer in Milan or Rome.  Those high collars are outrageous, but cool at the same time.  Predictably, the Norma Bengall's zipper manages to plunge downward while exploring.

I enjoyed the plot, although there is a twist ending that the movie could have done without.  Bava's use of bright colors is as evident here as it is in his horror films, with the planet lit up by strange reds and greens.  The weak point, as is usual with Italian films, lies in the performances.  Barry Sullivan, Bengall and the rest all put in workman-like performances, but all in their own languages knowing that they will be dubbed for whatever region the film will be shown in.  Their looks fit their characters, from courageous captain to sexy-but-tough engineer to expert mechanic, but much of the tension and emotional impact is lost by the wooden line delivery by the voice actors.  Sullivan, the sole American, comes off the best in the English version, since I believe he dubbed his own lines.

Once again, Mario Bava is largely successful in making the movie he sought to make despite the limitations placed upon him.  The fact that it became as influential as it did is an added plus.