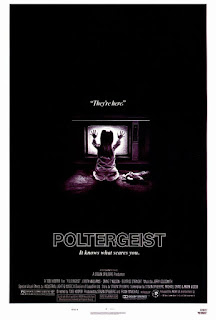 If you want to know why we have such a horrible, lifeless film rating these days as PG-13, it's because of this movie, Gremlins and Indiana Jones and the Temple of Doom.  After the MPAA initiated a rating system in the late 1960s, almost everyone was content that a PG-rated film may contain nudity, an f-word or two and a fair amount of violence.  Then, the 1980s came, and with it fake moral outrage through "parental advocacy groups" about everything from movies to music.  Temple of Doom had a beating heart being removed from a sacrificial victim, Gremlins had one of the eponymous creatures blown up in a microwave and Poltergeist had a guy hallucinating about peeling his face off.  All of this quite tame when you look at many PG movies that came before it, but, if you yell loud enough, someone gives you a sucker to shut you up.  Thus, PG-13.

To be fair, there is nothing limp or lifeless about this story of a suburban family suddenly set upon by angry ghosts.  Directed by Tobe Hooper (although there is quite a bit of evidence that Hooper's name was used to hide the fact that producer Steven Spielberg didn't want to get caught directing this and E.T.: The Extraterrestrial at the same time), Poltergeist manages to be an intense and, sometimes, frightening film despite the only death in the entire thing being a bird.

Steve (Craig T. Nelson) and Diane Freeling (JoBeth Williams) are living in a house in a subdivision that Steve is almost single-handedly responsible for selling out.  They live with their teenage daughter Dana (Dominique Dunne), son Robbie (Oliver Robins) and their youngest, Carole Anne (Heather O'Rourke).  One night Steve awakes and finds Carole Anne in front of the TV, looking at the static and appearing to be talking to voices that she is hearing.  Her mother asks her about it the next morning, and she responds that the "TV people" were talking to her.  Shortly afterward, strange phenomena begins.  At first amusing, it soon results in Robbie being pulled through his window as a tree in the yard attempts to devour him.  It turns out, however, that this is a distraction so that the ghosts can lure Carole Anne through a portal in her closet and take her to the other side.

Carole Anne's room quickly becomes a whirlwind of activity, and in an attempt to get their daughter back and stop the goings on they contact a group of psychics who, in turn, decide what she really needs is the help of Tangina (Zelda Rubenstein), a medium known for "cleaning" houses.  Their efforts succeed in getting Carole Anne back, but it turns out that the ghosts, led by some otherworldly beast, aren't done with them yet.

While some of the scares and activity are played humorously, but so much happens within the last 15 minutes of the film it is almost a sensory overload.  Objects thrown about, a manifestation of the beast itself and corpses rocketing up from the ground are just a few of the things the Freelings (and the audience) experience toward the end.

Everyone knows this is a classic horror film by now.  You have seen it on retrospectives, talked about (especially with those of us who role their eyes at the uselessness of doing a remake).  In some ways everything good that happened here was negated by two awful sequels.  So, in retrospect, does this original film still stand up?  Surprisingly, yes.  It is definitely a film of its time, but if you take it as a document of something happening to a typical 1980s American family, much of that dated look can be excused.  As for the effects, some still work brilliantly (objects flying around, the first time we see the face of the beast) while others are laughable (the tornado when the tree attacks Robbie).  To be honest, the awful effects were awful back in 1982, so it's fair to say the good ones have aged well.  They definitely don't look like cartoons like the CGI of today.

While it definitely earns its reputation as being a great fright movie, if you're looking for blood and guts, this does not live up to the outrage that it caused back in its time.  In truth, rarely does any movie outside of ones purposely designed to do so.  Poltergeist was an attempt by Steven Spielberg to do something a bit different and, while Tobe Hooper may or may not have directed this completely, he at least got paid and we got 1985's Lifeforce.  I know, that movie causes even more controversy among Hooper's fans than this one, but I have always loved it and consider it redemption for people who questioned whether or not he was a competent director.