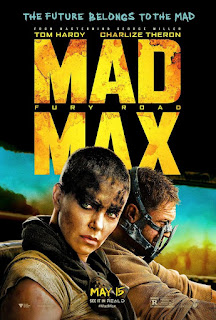 Typically when I hear that a franchise I have loved over the years is getting a remake or a reboot I just grown and ignore it.  I don't really throw as much of a fit as some do; I just decide, quietly, that I'm not going to bother watching it.  Sometimes I do end up seeing them, especially horror films, when it comes time to try to jam a bunch of movies into a month's viewing and, toward the end, I've gone way past the cream of the crop.

We had been hearing rumors that George Miller was going to make a fourth Mad Max film for years.  The second film in the series, Mad Max 2 (released in the United States as The Road Warrior) managed to make Mel Gibson, who played the title character, an international star.  Because of the success of that film, Miller made the slightly tamer Mad Max: Beyond ThunderDome in 1985.  It was a major hit when it came out and had much of what had made the two previous films classics, but a later plot involving lost children gets unnecessarily mocked today.  Despite this, all three Mad Max films were solid to great movies and, despite Gibson having success in the United States with the Lethal Weapon franchise and as a director himself, everyone was hoping he would get another turn back where he began.

Years passed, everyone got older and Gibson's handlers did a worse and worse job of keeping his mouth shut when he wasn't on camera.  Then, about a year ago, it was announced that George Miller had, with Tom Hardy as Mad Max and Charlize Theron as a co-star, made a new film called Mad Max: Fury Road.  No rumors this time, just a largely completed project that the studio had taken one look at, handed Miller more money and told him to do even more with it.  So, finally, we got the result.

The result was everything we could have hoped for.  Max is on the run from the forces of Immortan Joe (Hugh Keays-Byrne), a warlord who has set himself up as a godlike figure amongst the pale, scarred warriors called WarBoys.  Max is captured and found to be a universal blood donor and is used to keep the WarBoys, many of whom are suffering anemia and other side effects of mutation called by radioactive fallout, alive.

When Joe's Imperator Furiosa (Theron) decides to steel one of his war rigs, along with his wives, a WarBoy named Nux (Nicholas Hoult), who is on his last legs, grabs Max and attaches him to the front of his vehicle with a tube to provide him a constant blood transplant as he goes after her, hoping to die in a blaze of glory and go to Valhalla.  Of course Immortan Joe is furious, as the wives were handpicked due to suffering no ill effects, and his hopes of producing a viable, untainted male heir are dashed.

With Joe's forces in hot pursuit, Furiosa enters hostile territory where she and the convoy with her are attacked by Buzzards, raiders driving modified Volkswagens with large buzzsaws attached that are used to disable vehicles.  During the pursuit everyone is caught in a violent dust storm.  Nux expects to die, but survives, with a rather unhappy Max coming through as well.  Max detaches the blood tube, but still maintains his chain and mask.  Nearby he encounters Furiosa and the wives.  At first he tries to use them to get free of his bonds and escape, but agrees to help them get back to her homeland, where she hopes to find sanctuary.  Meanwhile, Joe's remaining forces have contacted those of his allies from Gastown and the Bullet Farm, and the pursuit resumes.

Fury Road has about anything a Mad Max fan could expect.  Wild vehicles, chases, great villains, apocalyptic deserts.  It's exactly what we have been waiting for all these years.  The story itself takes place sometime after Mad Max 2 (conventional wars over resources and societal collapse had happened, but the nuclear exchange was yet to come) and ThunderDome.  While some mutations were seen in ThunderDome, it was hinted that quite a bit of time had passed since and that things were getting slightly back to normal, lingering radiation not-withstanding.  Here it is definitely much closer to the actual disaster, as most people are suffering sterility or birth defects of some sort as well as various diseases due to decreased immunity.  Although times are given in the series, one gets an idea that, since what we are watching onscreen is really a story being told in the far future, that the timeline does get a bit fuzzy.

As for the main internet outrage, I personally don't see anything too feminist in a message that women are not commodities to be bought and sold.  In fact, I don't think there is really that heavy-handed a message, nor do I think that's really a message most of the world needs hammered into them these days.  If you still think women are property or playthings for men, you're simply either quite dense or a horrible human being.  You need more than a science fiction action thriller with a bunch of cool vehicles to change your mind.  What we are being presented throughout the films is a series of stories, some in which Max is the center and some in which he is just a side player, but which in the far future present a number of stories that string together about a time long forgotten, similar to stories about Lancelot and King Arthur.  It is much more Joseph Campbell than Gloria Steinem.

Tom Hardy does a fine job as Max even though, truthfully, this is largely Furiosa's story.  It is left open what will happen to those who still call the Citadel home, but in the end that is her story as well.  There are more stories about Max, however, and happily we won't have to wait another 30 years to see them.