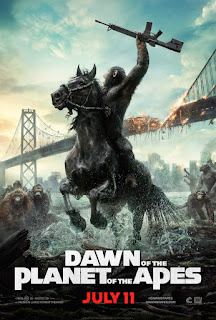 Tim Burton's 2001 remake of Planet of the Apes was one of his biggest misfires. A little closer to the Pierre Boulle novel than the 1968 film (takes place on another planet instead of on Earth, with a similar twist ending upon arriving back on Earth), much of what could have been done was squandered.

10 years later came Rise of the Planet of the Apes, starring James Franco (never really a reason to recommend any film, but decent here) with Andy Serkis providing the voice and movements for Caesar, an ape that achieves sentience do to an experimental Alzheimer's drug.  Taken from his caretaker and placed in an abusive facility, Caesar gives the drug to his fellow inmates, bringing them to his level.  The escape from the clinic releases a virus among the human population, and the apes escape into the forests of northern California. It's largely a remake of 1971's Escape from the Planet of the Apes, with some elements of the 1972 Conquest of the Planet of the Apes thrown in at the end.

A decade after the events in Rise, the apes have established a hunter-gatherer society ruled by Caesar (Serkis) and assume that all the humans have died.  This assumption is destroyed when a scouting party, needing to clean out and restore a hydropower station in an attempt to bring electricity to a human colony established within the ruins of San Francisco, arrives.  Caesar's son Blue Eyes (Nick Thurston) is shot, reigniting fears of a human invasion and the seething anger Caesar's right-hand man, Koba (Toby Kebbell) has toward humanity due to his abuse while in captivity.

Initially Caesar distrusts as well, riding to San Francisco in a show of force and telling their leader Dreyfus (Gary Oldman) to stay away.  However, needing the electrical power and afraid that Dreyfus may attack to get it, Malcolm (Jason Clarke) strikes a deal with Caesar to repair the facility.  Koba, however, has other plans, staging a coup and taking the war to the humans himself.

After the horrible Tim Burton version I initially wasn't excited to go any further, expecting a retread of old plots with the usual cartoonish CGI effects.  Rise of the Planet of the Apes surprised me by actually being a good story, so that is largely why I gave Dawn of the Planet of the Apes a chance, and I am glad I did.  I was aware going in that this was largely a version of the last movie from the original series, Battle of the Planet of the Apes, which in 1973 was one ape movie too many.  Budget had something to do with it, as did studio (and audience) apathy, so it is no surprise that the core elements are handled much better here.

While Jason Clarke, Gary Oldman and Keri Russell do well in their parts, the focus is definitely the dynamic between Caesar and Koba.  The movie does a great job of portraying a post-plague world and the clash between two dominant species, but I think where it does make a mistake is by trying to balance the two.  There just isn't enough of a similar conflict between Dreyfus and Malcolm (although I can see the intention to mirror the Caesar/Koba dynamic on the human side), and the evolution of the apes' society is so much more interesting.  In fact, humans don't show up until about 20 minutes or so into the movie.  When they do, though, the focus moves toward them.  The focus should have remained on the apes, but I'm sure someone along the way thought audiences wouldn't be able to relate enough.

Another reason it should have remained with the apes is that the effects are great in most cases.  Since the actors playing the apes were often on the set it doesn't come as the humans trying to interact with thin air or cardboard cutouts.  However, there is much to be desired when it came to many of the times they had to blend CGI with the actual cast, most notably with Caesar's newborn Milo.  I don't fault the use of CGI in a film like this (it works much better than animatronic masks would), but it points up the fact that there is still a long way to go before computer graphics can blend seamlessly with reality.

It was also refreshing seeing a film in real colors, rather than shaded or processed to teal and orange.  While not all effects may be great, filming with natural colors gives the story a reality it may have otherwise lacked.

Now all that remains is to see if War of the Planet of the Apes keeps up the same quality or if it falls the way of the original series.