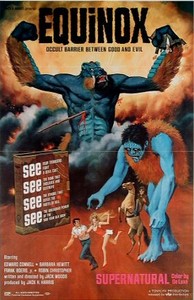 David Fielding (Edward Connell), an inmate in a mental institution, becomes agitated and sure that he will die, as it has been a year and a day since his friends disappeared with him while on a picnic to find their lost professor.

It turns out Dr. Arthur Waterman (Fritz Lieber, Jr.) was fiddling around with some magical forces, and as David, his girlfriend Susan (Barbara Hewitt), friend Jim (Frank Bonner) and his girlfriend Vicki (Robin Christopher) arrive they find the professor's house smashed to bits.  They are directed by a tape recording to head out to a state park, where they run into a forest ranger (Jack Woods) with the unlikely name of Asmodeus.  Hearing a voice from a cave, and thinking it may be Waterman, they investigate, finding an old man guarding an ancient book, which he hands over to them, glad to be rid of it.

It turns out that Waterman at some point was also in possession of the book and, using notes he made, the friends translate it.  Waterman's meddling, it seems, has opened a crack into another dimension, allowing Asmodeus to come through.  Meanwhile, Asmodeus tries different methods of retrieving the book for himself, from possessing the friends to summoning creatures to attack them.

The movie was directed by Dennis Muren, who would later provide special effects work for Industrial Light and Magic, and Woods, who mainly filmed the hospital scenes in order to stretch what was essentially a student film project into a feature.  While the acting and pacing are amateurish, the surprise in the movie is the special effects.  Forced perspective and stop motion abound, and the movie is largely a fan homage to those in which Ray Harryhausen and Willis O'Brien provided effects.

What one will also realize while watching the film is that the "four friends trapped in the forest dealing with an evil book provided by a professor" is, despite some marked differences, quite similar to The Evil Dead.  In fact, some plot points are so similar that the question has been frequently raised about if it was intentional.  While Sam Raimi himself had not seen the film prior to making his own (Equinox itself is quite obscure enough that one would be even more surprised if he had seen it), but some members of his crew had.  Being that the set-up for both help keep production costs down (isolated location, limited cast, ability to spend more time focusing on special effects), it appears that it was more coincidence that anything. Still, this should at least be viewed for its special effects work and so one can draw their own conclusions.