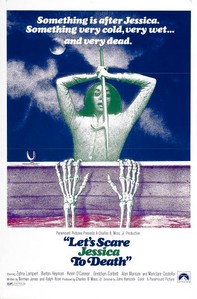 Jessica (Zohra Lampert) has just been released from a mental institution after a breakdown.  It turns out she happens to frequently see and hear ghosts and other spirits that seem to follow her around and bother her at inopportune times.  Thinking that what she needs a nice rest away from the big city, her husband Duncan (Barton Heyman) and friend Woody (Kevin O'Connor) decide to buy an old farmhouse on a New England island and make a go at farming.

It turns on that the whole thing is the worst idea for someone like Jessica.  The former owner of the house, Abigail Stone, was drowned and her body never recovered.  When the group attempt to sell some of the items in the house to prop up their dwindling funds, they also learn the reason that they are shunned is that Stone is thought to still wander the island in the form of a vampire.  Also, Duncan becomes to take too much of an interest in Emily, both to Jessica and Woody's chagrin - especially as Jessica starts to suspect, more and more, that Emily is actually Abigail.

An important thing to get out of the way early is that this is not a fast-placed slasher type film despite the exploitation style title.  It is a slow build, based largely around atmosphere and a sense that what we are being shown, largely from Jessica's perspective, may be a manifestation of her mental state rather than the whole truth.  For many it may be a bit too close in style to other movies that leave it vague as to whether the supernatural events are real.

What really elevates this are the performances of Lambert and Costello.  The male leads are flat, stock '70s characters (maybe purposely so), but Lambert manages to exude an aura of desperation and fragility that recalls Mia Farrow's performance in Rosemary's Baby.  Costello's portrayal of Emily, on the other hand, is one of lightheartedness with an inner sense of menace.  Whether she is Abigail risen from the dead or just some hippy chick that takes a liking to Jessica's husband, there are hidden, unfathomable depths that Jessica should rightly fear even if the rest of the movie is only playing out in her imagination.

In the end, despite many flaws and some uncanny similarities to other slow-burners of the period, Let's Scare Jessica to Death manages to be an effective and interesting film.