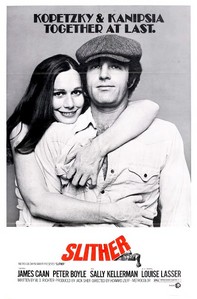 Dick Kanipsia (James Caan) is released from prison and stops off to visit his old friend Harry Moss (Richard B. Shull) before continuing on to find work other than stealing cars.  However, someone has it out for Moss, and he is shot shortly after Kanipsia's arrival.  His life slipping away, Moss tells Kanipsia to look for a man named Barry Fenaka (Peter Boyle), who knows where to find a fortune in stolen loot.  Kanipsia escapes Moss's cabin by way of an underground passage and heads off to find Fenaka.

On his way he runs into Kitty Kopetzky (Sally Kellerman) and helps her fix her vehicle.  Finding riding with her easier than walking, he decides to travel with her a bit.  That is until, after stopping in a diner, she decides to rob the place.  Dick, on probation, gets as far away as he can from the scene.

Locating Fenaka, he finds out that Moss's former partner has also gone straight and plays in a popular swing band.  Upon hearing about Moss's death, Fenaka and his wife Mary (Louise Lasser) agree to accompany Kanipsia in their R.V. to find attorney Vincent Palmer, with whom the funds were left until the partners could safely retrieve it.  When they visit Palmer's office, however, they find out that he has retired and possibly absconded with the money.  Finding out where he is currently living, they head off once again and run into Kopetzky along the way.

Unfortunately, that's not the only thing they run into.  They find themselves pursued by suped-up, growling black mobile homes with the name of a summer camp painted on the side.  Their shadowy pursuers seem to know something about the missing cash and are willing to do anything from preventing our foursome from finding it.

Slither was written by W. D. Richter, who was also responsible for bringing us Big Trouble in Little China and The Adventures of Buckaroo Banzai.  Therefore, a lot of the strangeness of this film should be unsurprising.  Ostensibly a caper comedy, the addition of the black R.V.s adds a bit of menace one wouldn't immediately expect.  And, since this is the '70s, there are several major car chase set-pieces involving the motor homes.

In the end, though, this is light entertainment.  Despite some similar set-ups to exploitation films of the time, don't expect over-the-top violence or nudity, as even Sally Kellerman manages to keep her clothes on in this one.  And I think that's where too many people slag this off - they're upset about their preset expectations not being met, instead of being entertained by what is here, which is quite enjoyable.