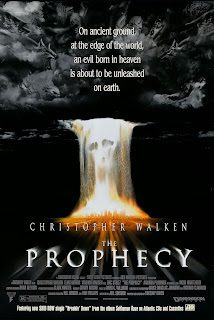 I remember little of the advertising for The Prophecy other than it tried to sell it as being directed by one of the writers of Highlander.  That wasn't exactly a major recommendation, because by this point Highlander II: The Quickening had come and gone from theaters, but unfortunately not from the memories of those of us who enjoyed the original so much.  Other than that no one really knew who Gregory Widen was.  He is largely a screenwriter, and remains so, with The Prophecy being his only directing credit for a feature film.
Knowing little of the story when I saw it in the theater I found myself enraptured by the film.  One of the biggest surprises was that the town where a lot of the action takes place, Chimney Rock.  It's a fictional town, but was filmed in a place I had photographed the year before: Superior, Arizona.  In fact, most of the movie was filmed in Arizona, with Phoenix standing in for Los Angeles in a number of scenes.  I always get excited when a movie worth watching is filmed in my home state, since, unlike Vancouver and Atlanta, Phoenix never became a big draw for film making despite the fact that the Sonoran Desert and Monument Valley were frequent backdrops for Westerns.
Happily, The Prophecy, though nowhere close to being a great film, is at least a good one.  I thought more of it back at the time I originally saw it, but it still has its charm to this day, especially given that Widen was able to get a wonderful cast of known and up-and-coming actors together.  While the story doesn't always hold together well (and certainly not through the direct-to-video sequels), it's still entertaining and features one of Christopher Walken's best performances.
Thomas Dagget (Elias Koteas) is about to become a priest, but leaves as he is being ordained after seeing visions of a war in Heaven.  Instead, he becomes a police officer, and later a detective in Los Angeles.  He never completely leaves his religion behind, which is why he is contacted by Simon (Eric Stoltz), an angel who reveals to him his visions were real.  At first doubtful, he begins to think something may be happening after a strange body is found with an ancient Bible concealed in its robes telling of a second war between the angels.
Dagget discovers that Simon was interested in a dying mining town called Chimney Rock, Arizona, where an ex-military officer has recently passed away.  Meanwhile, a local teacher in the town named Katherine (Virginia Madsen) becomes concerned when Simon has contact with a Native American girl named Mary (Moriah "Shining Dove" Snyder), who has suddenly taken ill.  While her and Dagget investigate what happened, a new player appears: Gabriel (Walken), with his zombie servant Jerry (Adam Goldberg) in tow.  Turns out the soul of the dead soldier is the one foretold in angelic prophecy to lead one side to victory against the other.
While Thomas Dagget is nominally the main character of the film he is as dull as can be, and Elias Koteas doesn't really do anything to improve that fact.  That is one of the main flaws of the movie.  Although the whole film has a dreamlike and unsettling pace, and Widen makes the most of Superior and the surrounding desert, it still can't overcome that neither of the supposed leads have any chemistry and neither do those characters have much life.  Virginia Madsen, after playing such a key role in Candyman, is pretty much wasted here.  Amanda Plummer, though she is listed above Adam Goldberg, is in the movie less than he is and plays his replacement as Gabriel's pet.
Despite all this the story holds up much better than similarly themed movies about celestial conflicts.  Probably the only one that did it as well wasn't a movie, but the first few seasons of Supernatural before they resolved their conflict between Michael and Lucifer.  Because of the budget little is seen, making the one shot of a ravaged Heaven filled with impaled angels even that much more shocking.
Even more memorable than the story is Christopher Walken's portrayal of Gabriel.  With jet-black hair, pale skin and the look of a man who has been fighting wars for millennia, it is one of the defining roles where he gets to play an insane villain.  Unfortunately this was not the only time he was playing such a character in the early 1990s, which meant that even though he has quite a range the last 30 years of his life have scene him playing similar roles.  The same can't be said for Viggo Mortensen, who shows up toward the end as Lucifer.  Lucifer has his own reasons for wanting the war to come to an end, although he has sat it out since his own rebellion ended in his fall.  Mortensen plays him as arrogant and amoral, and not necessarily evil - although the Devil is not above threats and coercion.  Mortensen's performance was one of the reasons I looked forward to him playing Aragorn in the Lord of the Rings series.
Despite being written by the same guy who came up with the characters in Highlander, don't expect a grand finale on the same scale.  It wasn't in the budget, and what he did works out fine.  It does kind of lose steam as it gets there, which is also why Mortensen's Lucifer is so important.  The ending would not have really been as interesting without him.  As it is, though I don't find The Prophecy as intriguing as I did originally, it still has enough interesting concepts and was a rather unique horror film for its time.
The Prophecy (1995)
Starring: Elias Koteas, Virginia Madsen, Christopher Walken
Director: Gregory Widen