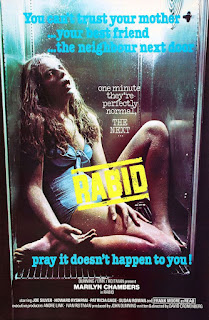 David Cronenberg's Shivers ended up making a good deal of money despite of, or more likely because of, the controversy raised due to partial funding coming from the Canadian Film Commission.  The movie dealt with a new parasite being brought to life due to experiments with viruses to help fight diseases, and a doctor who decides to use the research to create his very own sexual revolution.  The result is an entire apartment complex full of infected, sexually crazed inhabitants who, at the end, head off to infect the rest of Montreal.
For his second movie, Rabid, Cronenberg didn't vary heavily from the theme of this first movie, but had the advantage of a slightly higher budget - and once again aided by the Canadian government, but without as much hand-wringing as Shivers.  This time, instead of a parasite, we have a sort of combination of traditional vampire tale with Night of the Living Dead, with references to a real martial law situation in Montreal in the early 1970s as well as the usual dash of uncomfortable allusions to sexual penetration.  On top of it we also get a surprising layer of scientific gravitas due to his medical background.
Hart Read (Frank Moore) and his girlfriend Rose (Marilyn Chambers) are out for a motorcycle ride when an accident occurs.  He is left with major, but not life-threatening injuries, while she suffers burns and is in a coma.  Luckily it occurs near the Keloid Institute, a plastic surgery center owned by a Dr. Keloid (Howard Ryshpan).  Concerned that Rose may die during the long transport to a hospital in Montreal Keloid decides to do the surgery in his clinic using an experimental skin grafting technique to regrow the damaged skin and organs.
The result is that Rose lives, but now has an appendage under her left arm with which she can drink human blood - the only thing that, at this point, can sustain her.  Rather than turning her victims into other bloodsuckers her attacks give them a disease similar to rabies, causing the victims to become violent and bite others, passing the disease on as well.  As the city tries to prevent the spread martial law is imposed and doctors scramble to come up with a vaccine.  Meanwhile, Hart joins Keloid's business partner Murray (Joe Silver) in an attempt to get to Murray's family as well as find Rose, who at this point is back in the city with no idea of the trouble she has caused.
Unlike Shivers we're not stuck in one location for the majority of the movie, although much of the early action takes place at the Keloid Clinic.  One advantage of having a bit more of a budget is being able to film in various places around Montreal, including an infamous scene in a shopping mall and another on a subway train.  It's not effects heavy; there are a couple close-up shots of Rose's appendage, obviously a prop all on its own, while most of the rest is makeup, fake blood and bluish-green drool.  In typical Cronenberg style Rose's new organ manages to resemble an anus, vagina and penis all at the same time, with an added spike on the tip.
Marilyn Chambers was obviously not in the movie for her acting ability, although she does a decent job.  Sissy Spacek was Cronenberg's original choice for the role, but since she turned it down producer Ivan Reitman suggested Chambers, who was looking for mainstream acting roles and would add sex appeal due to her well-known porn career.  She is memorable in the role, though a good portion of the movie is Cronenberg showing us the effects of the virus, meaning both her and Frank Moore have long periods where, even though they are the leads, they are largely in the background due to the larger events.  That's not a loss for Moore, as Hart is a pretty forgettable character.  Two of the ancillary characters are the ones that connect more with the audience: Joe Silver as Murray, and Susan Roman as Rose's roommate Mindy.  It's more the circumstances they find themselves in rather than any particular thing that stands out in the characters, but the focus throughout the movie is on society at large rather than just a typical hero and heroine.
Rabid is quite episodic and, though a quick-moving movie for the time it was made, may lose some modern viewers early on as things get set up.  It does pick up as it goes and, despite all the typical horror elements, manages to be a pretty smart movie.  The reaction to the virus, and people's resistance to the methods taken, are all too familiar.  In addition, the procedure that Dr. Keloid performs on Rose sounds almost like science fiction, but it's basically the concept of using stem cells to regrow organs.  The problem is Cronenberg, with his knowledge of biochemistry, didn't stop to think that most viewers would miss the fact that it was neutral tissue that, instead of of replacing the damaged organ, suddenly grew a new one and changed the host.  This left many people wondering how a skin graft could grow a vampiric organ.  It's still highly the realm of fiction, but knowing the director's scientific background helps explain things more.  Even without that this is one of his best movies, and definitely an unforgettable milestone in Canadian horror.
Rabid (1977)
Time: 91 minutes
Starring: Marilyn Chambers, Frank Moore, Joe Silver, Susan Roman, Howard Ryshpan
Director: David Cronenberg