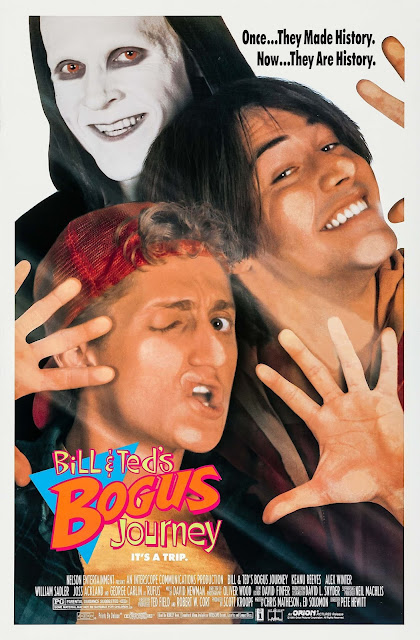 Bill and Ted's Excellent Adventure was one of those movies that just came out of nowhere.  It starred two unknowns, barely had a budget and had a plot that was completely ludicrous.  I'm not just talking an entire society based on the music of a fledgling metal band, but it came down to a packed auditorium for a history presentation.  When I was in high school I sometimes purposely got myself detention to get out of more exciting events, and I happen to love history - just not out of the mouths of football players.

I ignore most of those particulars in the original film because it is, in many ways, as parody of many of the teen comedies at the time.  It's purposely over the top in certain cases, and goes overboard with the importance of high school.  By the late 1980s the realism that Penelope Spheeris and John Hughes had brought to the screen concerning actual issues with teenager growing up at the time were largely in the past, replaced by what seems to be a purposeful escape from reality.  Amazingly, almost everything in Excellent Adventure worked, and still works.

Word of mouth gained it a following, and that translated into a huge profit both in the theater and, especially, from video sales.  A sequel was almost a given, despite the fact that Keanu Reeves was on his way to becoming a big star, while Alex Winter was busy - well, not too busy, but would forever be known for being Bill S. Preston, Esq., despite his brief foray into directing (Freaked) and other media.  To Keanu's credit he had no problem returning to the role.

This time around we find Bill and Ted living on their own, trying to get the Wyld Stallyns some attention while getting up the nerve to to propose to princesses Elizabeth (Annette Ascuy) and Joanna (Sarah Trigger).  Their big chance is the local Battle of the Bands, which, despite their lack of talent, organizes Miss Wardroe (Pam Grier) agrees to give them a chance.  Unfortunately, forces stand against them - an evil revolutionary named De Nomolos (Joss Ackland) who plans to use two evil robot versions of Bill and Ted to change history so that it will be based on his ideas of discipline and order.

His plot initially succeeds, and the duo's attempts to call intention to their demise falls on deaf ears and eventually gets them banished to hell.  Eventually, with the help of the Grim Reaper (William Sadler) and an alien scientist named Station (Ed Gale, Arturo Gale, Tom Allard), they take their chance to make it back to Earth, save the princesses and make it on time to win the Battle of the Bands.

This movie could have played it safe and did a retread of the original time travel plot, bringing in more historical figures to help out at another crossroads in their path, but fortunately we get a completely different story, albeit without compromising anything that made the first movie great.  It does have its cheesy parts, particular toward the end, and I do wish they had at least attempted to having ending music set up for them to at least mime to.  It does seem to to both go on a bit too long in the last act, while still making the final battle feel anticlimactic.  Even with that, I still like De Nomolos as a villain, even if Joss Ackland was only playing the role because he lost a bet; he still hilariously overacts it rather than simply phoning it in.

George Carlin is back briefly as Rufus, and Hal Landon, Jr is back as Ted's father, still trying to stick him in military school (despite the fact that at this point, if Ted wasn't so scared, he could tell Dad where to stick that threat), and one of the best parts is watching Landon imitate Ted when his son briefly possesses him.  We even get Amy Stoch back as Missy, both in one of the best jokes and also in a pivotal role in the proceedings.

The person that steals the show, however, is William Sadler.  The Grim Reaper adds a needed dimension to the comedy by playing the straight man.  Made to look like Death appeared in Ingmar Bergman's The Seventh Seal, one of the classic scenes from Bogus Journey is a parody of the Knight playing a game of chess for his life.  Not only that, but we have references to Star Trek, the original Heaven Can Wait and even an off-handed tribute to Voodoo with Taj Mahal playing Heaven's gatekeeper (typically Saint Peter, but also Papa Legba in the Vudun religion).  The last thing many people probably expected was for a Bill and Ted movie to be smart, but when you have Chris Matheson (the son of the legendary Richard Matheson) co-writing the script it is a given that it's not just going to be wall-to-wall silliness.

The other thing to bring up is that, with the money earned from the first film, they could do a few things they couldn't do in the first film.  We see a bit more of San Dimas in the 27th century (with everyone in hilariously unwieldy "futuristic" outfits, while the set designs for hell, heaven and Death's domain are all wonderfully conceived, even if the old-school computer effects sometimes stand out quite a bit.  Still, their version of hell is one of the best representations I've seen, and it's been copped in different forms by both Preacher and Lucifer.  It is to Matheson and Ed Solomon's credit that they respected their fans' love for the first film that they didn't just decide to throw any old thing on the screen to make a buck.

While I would disagree with the modern assessment that Bogus Journey is better than Excellent Adventure, and that may be largely due to my on nostalgic feelings for the latter.  Still, it is hard for me watch the first without feeling that tug to put the second on.  Together they make a wonderful pair, both for those of us that remember the time period and for those who appreciate a time when comedy was still funny.