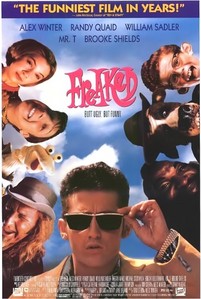 Ricky Coogan (Alex Winter) is a former child star hired by a chemical company to go to South America and use his fading star status to provide some gravitas to their claims that the chemicals are harmless.  The $5 million offered by chairman of the company (William Sadler) doesn't hurt matters, so with his friend Ernie (Michael Stoyanov) Coogan sets off to phone in his support for lethal fertilizer.

After landing in the small country of Santa Flan Coogan and Ernie encounter a group of protestors led by Julie (Megan Ward).  Intending to woo her, Coogan pretends to be on her side, but his identity is soon revealed.  Despite that, they're stuck together for the drive down to the chemical plant, but decide to take a detour to see Freek Land, a live freak show owned by Elijah C. Skuggs (Randy Quaid).  Coogan, Ernie and Julie soon find out, though, that they are to become part of the act.

Of course they are not the first.  Ortiz the Dog Boy (Keanu Reeves) is the leader of the freaks, with many others ranging from Sockhead (Bobcat Goldthwaite, playing a person with a sock puppet for a head) to the more traditional Bearded Lady (Mr. T).  To help keep the freaks in line Skuggs has in his employ two Rastafarian eyeballs that are not afraid to shoot escapees on site.

It turns out that the substance Coogan came down to promote, Zygrot 24, is the main ingredient used in Skuggs's freak-making machine, and indeed E.E.S., the conglomerate behind the chemical is in cahoots with Skuggs.  Skuggs, however, has his own designs - to make Coogan the ultimate evil freak, causing him to destroy the others and helping Skuggs with his own plans for domination.

Coogan, of course, has other ideas, and the other freaks, after some reluctance, agree to help him.  He also has help from the outside in the form of a creepy superfan named Stuey (Alex Zuckerman), who is desperate to tell the world about Coogan's plight.

Alex Winter became famous as William S. Preston, Esq., in the films Bill and Ted's Excellent Adventure and Bill and Ted's Bogus Journey.  Unlike costar Keanu Reeves, Winter's career seemed to have stalled after those two movies.  Freaked was an attempt to build give Winter a starring vehicle after Bogus Journey, and he even co-directed and put an un-credited Reeves in a pivotal role.  Unfortunately, Freaked ended up being too much for the studio to handle and, after disappointing audience response, it was released in a few small theaters and quickly buried.

Typically this results in a lost good movie, like Idiocracy or House of 1000 Corpses, finding an audience that appreciates it.  Freaked has found some cult fame, but at least in my opinion this is one of the few times the studio was right.  This is quite a disjointed movie filled with enough stunt casting to fill out a Police Academy film, even throwing in Brooke Shields as a talk show host and Morgan Fairchild as a stewardess.  The performances are hammy and there is too much effort put into being "wacky."  I do like some of the creature effects, and when it just veers off into weird (like with the eyeballs) you get a feeling that more of the movie could have worked if most of it wasn't filled with Hollywood Squares guests.

After watching this Alex Winter's lack of success after Bill and Ted  makes quite a bit more sense.