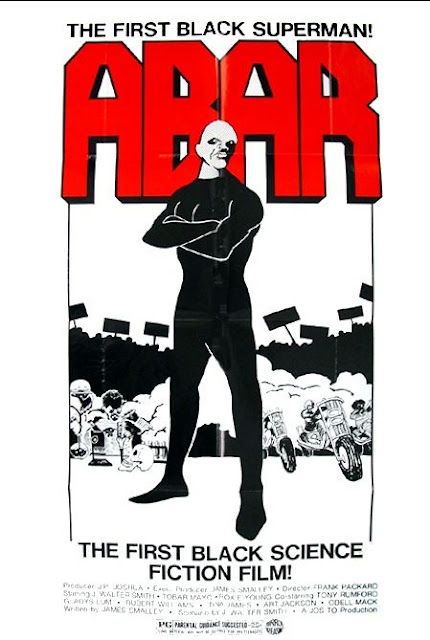 There are plenty of blaxploitation films that are remembered for various reasons.  Some of those reasons is that they took an existing property and just added the word "black" to it - like Blacula or Blackenstein.  So, it should come as no surprise that at some point we were going to get SuperBlack.  Unlike the other two, which have long entered public domain (the characters, at least), Superman was, and still is, owned by DC Comics.

Therefore, we can't just have a Kryptonian with extra melanin fighting crime and bigotry in the ghettos of Metropolis (see how this practically writes itself?), the necessity was to come up with a whole new concept.  The person responsible for this was one James Smalley, who wrote and produced what would ultimately become Abar, the First Black Superman (sometimes just titled Abar).

The titular character (Tobar Mayo) is a popular community activist that is both trying to organize against the politicians that give lip service to cleaning up the ghetto, as well as those of his own race that leave their fellows behind to suffer.  It is initially the latter that leads him to come to the aid of Dr. Kincade (J. Walter Smith), his wife (Roxie Young) and his children Debbie (Gladys Lum) and Tommie (Tony Rumford).  The family has just moved into the upper middle class, and very white, suburb of Meadow Hills.

This fact causes a near riot, with everyone from the homeowners' association to Nazis showing up to encourage the Kincades to leave.  Abar would also prefer for them to do the same and return to do some good for the Black community, but eventually he becomes the family's bodyguard as everyone seems out to murder them for simply living in the wrong neighborhood.  Kincade's reluctance to leave frustrates everyone, including his wife, but he has a reason for staying: the house provides him space to work on his experiment, which is to make an indestructible human being that can go forth and do good for not just for his own race but humanity in general - and he hopes Abar will be this person.

The movie definitely has some ambitions, largely some criticisms of black political and religious leaders that abscond with their own people's money, enjoying largesse without contributing back.  It does get a bit preachy, but the point is made decently (if not hilariously in some awkward scenes) throughout.  Tobar Mayo is a striking figure, with his shaved head and, often, understated acting.

However, we are talking about a film made on a shoestring budget.  Director Frank Packard has no style at all - just point and shoot - and it takes the air out of scenes that are supposed to build up tension.  The music is good (although Abar's main theme is obviously a reworking of Henry Mancini's "Peter Gunn"), but without the visuals it doesn't do anything.  The transitions between scenes are horrible, as if someone had never used an editing machine before, and there were several times where I wish they just would have gone to a hardware store, picked up a few industrial lights and at least attempted to light scenes.  I have seen movies with less budget at least work out how to do something with headlights, but it seems like Packard couldn't bother.

Which is weird, because it seems for the climactic scenes he had enough money to get his hands on a large fan to fake a wind storm.  I would have thought that would be more expensive than a few lights.

While Mayo is pretty good in the title role, everyone else, including J. Walter Smith, sounds like they are reading off of a cue card for a bad legal commercial.  This is even when it is obvious they went back and dubbed the dialogue; problem is, it is too obvious when they did, since the words don't match the lip movements.

Abar is quite watchable despite all its problems, but it was aiming to be uplifting, which is something missing from many blaxploitation movies.  Five on the Black Hand Side attempted the same, but was a stilted affair due to inexpertly moving a stage play to the big screen, and Abar fails largely by having the wrong people do it.  Instead, much of what is enjoyable about this movie is watching the cartoonish way in which white people are portrayed.  This looks like a Los Angeles suburb, and unless they moved into Orange County I highly doubt there would be Nazis goosestepping in front of their property.  Not saying there wouldn't have been tension, but having members of the city council literally trying to commit murder goes way beyond the point of believability.  They may as well have dressed the entire white population of the city in sheets if that was the point they were going for.

While Abar is well-intentioned, it is executed in a way that obfuscates its message, leaving a relic that ends up being enjoyed as a watchable, but incompetent, piece of film history to be laughed at.  Unfortunately, everyone involved takes it so seriously, it isn't something you can laugh with.  Or maybe we are laughing with them; Gladys Lum, who played Debbie Kincade, thinks about the same way - great message, bad movie - and she didn't even get to see what she had been in for 30 years.