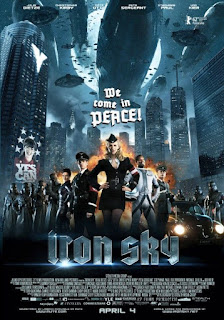 It has been nearly 75 years since the end of World War II, and the pure evil of the Third Reich still fascinates.  Seemingly ordinary folk did unspeakable crimes, often against people who had recently been their neighbors.  I often think it is because it shows how quickly the mind can compartmentalize, convincing a person that they are not "one of the evil people" when, in fact, they are.

Another thing that still creates interest in the Nazis is that they truly got up to some weird stuff.  Heinrich Himmler in particular was obsessed with the occult, and did have people under his watch searching for certain objects and proof that could help the German war effort.  They also had the benefit of men like Werner von Braun, whose expertise in rocketry we eventually used to our advantage to jump start our initially bumbling attempts to match the early successes of the Soviet Union in space flight.

While the truth is that, despite many advanced ideas, the German Reich was hamstrung both by a leader who was so obsessed with race that it often undercut his military and technological desires and by the fact that they didn't have the budget to achieve the ideas as they appeared on paper.  Still, authors, researchers and, in particular, conspiracy theorists have ever since ruminated over what they were truly up to and what they did achieve.  One of  the ongoing theories is that the Nazis, once they lost, fled to a secret base with their fleet of UFOs that were developed during the war.  The base, from which they are waiting to pour forth, is often said to be somewhere in Antarctica, and often dovetails with Hollow Earth theories.  Some of the more outlandish theories, though, have that base on the far side of the moon.

While at this point it's pretty obvious that the Reich never built flying saucers, left the Earth or created zombie-like supersoldiers - in fact, their look into the occult was about as successful as anyone else's, which is to say little to nothing - it makes for great "what-if" stories.  Typically, though, those stories go for the zombie angle, whether it be the Wolfenstein video game series or the recent movie Overlord.  For this reason it was refreshing to get the alternative version of a Fourth Reich laying in wait on the moon.

The year is 2018, and we have a female President (Stephanie Paul) looking at a tough re-election bid.  In order to up her chances she sends a ship to land on the far side of the moon, replete with campaign banners and a black model (Christopher Kirby) so she can get traction from sending the first African-American to our loan satellite.  What they discover, however, is that someone is already there, and that someone turns out to be a colony of Germans, descendants of those who left at the end of World War II, led by Mondführer Wolfgang Kortzfleisch (Udo Kier).  While the actual astronaut is killed, the model, James Washington, is captured by the ambitious Klaus Adler (Götz Otto) for interrogation, as they believe the landing is the spearhead of an invasion from Earth.  Once it turns out that it is not, attention falls more on Washington's smart phone, whose technology is years beyond theirs - and can power their giant war machine, the Götterdammerung.

Adler's girlfriend Renate Richter (Julia Dietze) becomes curious about the man from Earth, as does her scientist father (Tilo Prückner), who turns him white and sends him down to Earth with Adler to retrieve more phones.  Adler's ambitions to become Mondführer at first matches the ambitions of Vivian Wagner (Peta Sergeant) to get her boss re-elected, until Kortzfleisch gets suspicious and shows up to the party, making it clear that the the Moon Nazi threat is real.  Happy to have a war to fight, the President puts Wagner in charge of the United States's "exploration" vessel, which leads an international coalition to drive back the fleet of giant zeppelins and flying saucers launched by the Nazis.  Meanwhile, Renate and Washington must return to the moon to prevent Adler from successfully using the Götterdammerung against Earth.

There is no sense at all in trying to find any logic in what happens throughout this movie.  Only, it doesn't seem as far-fetched, technology-wise, as it did the first time I saw it.  There are two short stories by Harry Turtledove, taking place in our near future, regarding an alien invasion that fails largely because, although antigravity and interstellar travel are things most societies discover early in their development, all the other science we have is not.  Imagine a large spaceship, lit by lanterns on the interior, guided by spyglass and landing to take on 21st century America with cannons and matchlocks.  The situation is similar here, with the the German war machines powered by Helium 3 rather than fossil fuels, but largely the result is the same, as magnificent as the invasion fleet may appear at first.

Needless to say that, for a movie that has barely the catering budget for a Marvel film and was heavily financed by donations from people who wanted to see it made, Iron Sky looks wonderful.  From the grey, swastika-shaped moonbase to the battle between the forces of the Earth and the Moon, this looks much better than many films with larger budgets.  It also doesn't belabor its point, coming in at just under 90 minutes and keeping the story quite concise.  It still manages to pack in a good amount of political parody - albeit from a European standpoint, so be prepared for the U.S. to take plenty of licks.

The major problem is that many of these jokes date the movie rather harshly.  The President is obviously made to look like Sarah Palin, who at this point is never going to get within sniffing distance of the White House no matter what people thought might happen back at the time this was made.  Also, it's weird seeing an election taking place in 2018, but there are so many things that hint at this world being one parallel to ours that I think, rather than not being familiar with American political cycles, that Michael Kalesniko and writer/director Timo Vuorensola did it purposely to make it clear that there were some differences between their world and ours.

Christopher Kirby and Julia Dietze are good leads, but I do wish they had a bit more chemistry.  I think that it's simply they are not given enough time on-screen together for that to develop, although what romantic subplot their is involves the two of them.  Götz Otto also makes Klaus a great villain, while Udo Kier is always welcome.  Stephanie Paul is obviously having a ball making fun of Palin, but it is Peta Sergeant that upstages all of them.  She completely overacts Vivian Wagner in such an over-the-top evil manner that she is often more ruthless than Klaus, especially when she turns the battle with the Moon into her own personal vendetta against him.

As usual with movies of this type they are made for a specific audience, an that audience is one that gets excited about Nazis on the moon.  For someone like me that is really about all the information I need to know that I want to see a movie like this, similar to hearing that a film has Godzilla in it really is about what I need to get my attention.  The unfortunate trend now is to even take a movie like this seriously and at face value.  It may be light entertainment, but it is better than many movies larger budgets.  Typically a movie like this has trouble reaching its ambitions, but thankfully this is kept right within what they are able to accomplish.  Thankfully, it delivers what it promises.