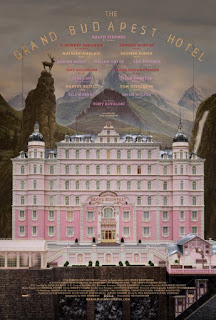 There are not a lot of modern filmmakers that will be presented in film classes other than a case of what not to do.  In many ways the auteur director has given way to little more than spectacle, even with many independents.  I believe it is because too many don't get to build their independent credentials before being swept up into the various expanded universes that exist today, and that whatever style they have is compromised in order to make their latest film fit in with the bigger picture.

Wes Anderson has managed to remain independent and be successful.  Bottle Rocket may have owed quite a bit to the Cohen Brothers, but even as early as Rushmore he was exploring his own personal muse - something that came to bloom in full with The Royal Tenenbaums.

Not knowing much about The Grand Budapest Hotel, it struck me at first that it was going to be something quite similar.  I expect quirky characters and a bit of a detachment from reality in his films, but it had been awhile since I had seen one of his films.  It was interesting to see how much he had grown and how much he has embraced the since of an auteur.

In the fictional Republic of Zubrowka, described as being somewhere in Eastern Europe and hinted at being one of the many remnants of the Austro-Hungarian Empire, a young lady in modern times visits a cemetery and the marker noting the country's greatest author.  She sits down to read his book.  We then flash back to 1985, where the author (Tom Wilkinson) is giving a videotaped interview of the events that went into writing the book.  This brings us back to 1968, where the author (Jude Law) is staying at the dilapidated Grand Budapest Hotel with its handful of regulars while he recovers from a bout of "scribe's fever."

One day a new figure shows up, and the concierge, M. Jean (Jason Schwartzman), points out that it is Mr. Moustafa (F. Murray Abraham), the owner of the hotel.  He rarely talks to anyone and lives in the servants' quarters rather than one of the grander suites.  Moustafa and the author strike up a conversation in the Arabian baths of the hotel and, over dinner, Moustafa relates how he came to own the place.  In 1932, Zero Moustafa (Tony Revolori) is a refugee working as the new lobby boy in the hotel, under the tutelage of its legendary concierge, Gustave H (Ralph Fiennes).

Gustave makes it part of his duty to make sure the elderly ladies who frequent the hotel are sufficiently entertained.  When one of them, Madame D. (Tilda Swinton), suddenly dies, he and Moustafa travel to the funeral to see if she left him anything.  It turns out she did - a valuable painting - but her oldest son Dmitri (Adrian Brody) and his band of sisters will have nothing of it.  Gustave steals the painting, but it's not for that that Henckels (Edward Norton), the chief of the Militia Police, arrests him for.  Rather, Gustave is framed for the dowager's murder by strychnine poisoning.  He is thrown in jail, while Dimitri's psychotic henchman Jopling (Willem Dafoe) is tasked with cleaning up any loose ends.  With the help of Moustafa and Moustafa's bride-to-be Agatha (Saoirse Ronan), Gustave escapes and tries to clear his name, with both Jopling and Henckel hot on his trail.

Rather than being a film based heavily on dialogue and character studies like many of Wes Anderson's previous movies, The Grand Budapest Hotel is quite fast-paced and relies on more on conventional story telling, while at the same time reveling in a certain alternate reality of its own.  With its fake diseases and obviously made-up references, it reminds me in many ways of The Life Aquatic with Steve Zissou, only that what I felt was forced in that movie seems to work naturally here.  I have never read the works of Stefan Zweig, which this is partially based on, but I have read many novels with plots and writing similar to this, and half the fun of the movie is the subtle satire on an early 20th century writing style that I personally love.

Ralph Fiennes is quite entertaining as Gustave, considering that I am used to him almost always playing in strong, often difficult, dramatic roles.  His sense of timing is effortless, and his dramatic experience ads quite a bit of depth to the character rather than just making him a lecherous clown.  He can be both haughty and hurtful, but is self-aware enough to know when he has gone too far, particularly when his anger results in him insulting the young Moustafa in a personal way.

Tony Revolori could easily have been a bumbling fool in the Woody Allen category as well, but, other than being a bit naive, also breaks free from being a caricature.  He has no problem wooing the woman he loves, and is quite dedicated to his role as the lobby boy, quickly growing to consider Gustave as not just a mentor but a friend.  He also often, without saying much or lecturing, provides a ground for Gustave, keeping the latter's conscience intact when his baser instincts try to get the best of him.

The Grand Budapest Hotel is also stacked with quite a number of known actors, some having as little as two or three lines, and some being essential to the plot.  This is not Willem Dafoe's first go-round as a psychotic killer, but the leather-clad Jopling is one of his most notable.  Bill Murray of course shows up briefly as M. Ivan, a member of the Society of the Crossed Keys, a secret underground organization of hotel concierges around the world that also provides one of the best set pieces in the movie.  We even get Harvey Keitel as a prison gang leader that Gustave aids in his plan to escape.

There are some violent scenes, although not graphically in-your-face.  The true brutality in the film is underplayed, as the events in the main story takes place as Zubrowka is slowly taken over by a fascist party that is hostile toward immigrants.  The fates of certain main characters are linked to this uprising of hate, and the way it is dealt with in a matter-of-fact way by the people who lived through it says a lot about the shock that existed in post-war Europe for decades to come as well as the resilience of the human spirit.  The same off-hand attitude toward characters dying of old-fashioned (although fictional, in this case) diseases carries the same weight.  It emphasizes who alien the world of just eight decades ago would be to us today.

It is that period which also informs the style in which most of the film is shot.  The different aspects represent different film aspects throughout different periods of time, with most of it being just slightly wider than the Academy Format that would have been used in the 1930s.  The modern scenes look like current film-making, while the few scenes from the 1980s appear in a more washed-out documentary fashion.  The 1960s is shabbiness and bright colors, while the 1930s recalls movie sets from the day and, though mostly in color, it both hints at black and white films of the time as well as the effect of the hand-tinted color films.

I have gone back and, particularly with Rushmore, appreciated Wes Anderson's film on second viewings often much more than I did on the first.  The Grand Budapest Hotel is the first of his that I thought all the elements came together.  It is something that should be viewed more than once, but just because it is an enjoyable movie, and not just to get all the references.  It may also be that I appreciate many of his films since I'm a bit older than when I first saw them, but regardless of the past, he has staked his place as one of our best directors.