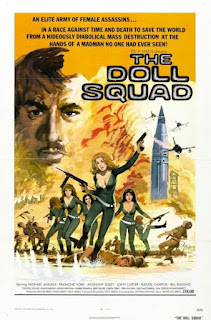 Get this: you decide to get a bunch of beautiful b-movie actresses together and play James Bond out in the California desert.  You even have a friend with a boat that can arrange it so you can film some exotic scenes on the ocean.  Your little spy movie may bomb with critics and get the usual reaction most of your films do but, 45 years later, it has spawned a television show (which itself spawned two movies of its own) and influenced one of the biggest action films of the 2000s.

This is what Ted V. Mikels's The Doll Squad accomplished.  An unabashed exploitation film like most of his work, it is surprisingly devoid the the T&A one would expect from this title (especially from the poster) and is a largely serious attempt at making an action film on a budget.  And, although Mikels is known more for Astro-Zombies and The Corpse Grinders, this seems to be where he actually decided to seriously buckle down and do a coherent movie.

CIA agent Victor Connelly (Anthony Eisley) and Senator Stockwell (John Carter) watch tensely as a rocket launch, part of a program promoted by the senator, proceeds at Cape Canaveral.  Suddenly, a mysterious voice comes through the television, warning the Senator that next time he should listen.  Seconds later the rocket explodes, killing everyone on board.

With the President threatening to cancel the project and concerns about a mole in the CIA growing, Carter consults his computer, Big Bertha, to find out who is most qualified to handle the job.  It suggests activating the Doll Squad, a group of elite undercover agents headed by Sabrina Kincaid (Francine York).  She begins activating her agents, but the first two are quickly dispatched by assassins that soon come for Sabrina.  After hearing the voice that was recorded and seeing the methods of the assassins, she soon recognizes who is behind the sabotage and blackmail: former agent Eamon O'Reilly (Michael Ansara), who disappeared on a mission to Venezuela.  Rather than disappearing, he has instead built a fortress and a private army on an island off the coast of the South American country, where he also employs the skills of scientists Dr. (Gustaf Unger) and Mr. (Bertil Unger) Cahaymen.

After Connelly's secretary Nancy (Lillian Garrett) is outed as a spy for O'Reilly, he decides to use his lover Maria (Lisa Todd) to infiltrate the squad by altering her to look like the newest Doll Squad recruit Kim (Jean London).  Kim is abducted before Sabrina can activate her and replaced by Maria, but Maria's overeagerness quickly outs her.  Sabrina finishes assembling the rest of the squad - martial arts expert Lavelle (Tura Satana), champion swimmer Sharon (Leigh Christian), Cat (Sherri Vernon), Carol (Carol Terry) and Elizabeth (Judith McConnell) - and rescues Kim, replacing her with Maria.

Posing as women on vacation, they travel to Eamon's island, where they are captured.  They soon escape and begin the task of bringing down his operation, but not before he reveals his ultimate plan: weaponized bubonic plague, distributed to a number of international criminals to infect rats in their home countries, while the antidote will be given to a select few to make sure they survive to rule the world as it rebuilds.  Of course, Eamon and Sabrina have a past, and the usual offer to rule the world together is given, but it is up to her and the ladies make sure the world has a future.

I do have to give Mikels a lot of credit for pulling this one off.  It's a typically overblown, complicated spy plot, but it's actually well thought out.  While admittedly slow in spots, it manages to be a fun action film.  The martial arts and fight scenes are not spectacular, but they are not as bad as some larger budget films I've seen from the same time period.  Not beholden to strict Hollywood conventions, the girls are both beautiful and vicious, and are believable in their roles.  Tura Satana actually had an athletic build and some martial arts training, while Leigh Christian when introduced as a champion swimmer has the body to make you believe it.  That is a big difference from the Charlie's Angels films, where I always felt that the cast looked like they would barely be able to fight due to being weak from spending the morning trying to throw up their three-raisin breakfast.

He also managed to get Michael Ansara and Francine York, both of whom are obviously having the time of their lives delivering the campy dialogue and kicking butt.  He makes a great villain, while she manages to be both convincing as a motherly figure and a no-nonsense agent.  Mikels made a good decision in largely playing this movie straight (although it is often unintentionally hilarious), as it gave York and Ansara the room to develop their characters more than one could expect.  The rest of the cast is largely meant to shoot things, punch things and look beautiful doing it, and they undeniably succeed.

Of course, this is a film with ambitions way beyond Mikels's ability (and budget) to execute, so there are many problems.  The "secluded Venezuelan island" is clearly the California desert, and the effects are horrible.  A production like this, unlike a number of others from the 1970s, didn't have the money to buy a building that was about to be destroyed or build one to burn down.  That leaves miniatures with cheap fireworks.  It also leads to most explosions (including two guards given a rather deadly beverage) being, again, fireworks with the old George Méliès trick of stopping the camera, moving the actor and adding the effect.  Problem is, his experimental effects from nearly 70 years prior to this film are better than what Mikels came up with. Surprisingly, the squib and blood effects are on par for most movies of the time

Still, it is a fun film, and from a guy who is known for rivaling Ed Wood when it comes to horribly inept film making.  It managed to be more influential than one would have expected, and it never sinks to the depths of pure female exploitation that many other films of the time would have.