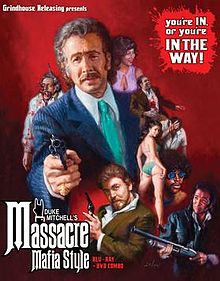 Who was Duke Mitchell?  That was the question I had when I saw the credits come up for this.  I was wondering if this was going to be another Italian production where someone used an American sounding name to hide the fact that it was a foreign film.  However, no dubbing, Los Angeles locations instead of New York or Rome; had to be American, but definitely not a typical Hollywood film.

I should have known who he was. Not from music, surprisingly.  He was a crooner, the "King of Palm Springs" in fact, and friends with Frank Sinatra.  However, recorded output from him is pretty scarce.  Since primarily I collect records, it may be a surprise that I didn't know who he was, but even someone with a large collection will not know 99 per cent of the artists that have recorded in the last 140 years unless they get something in their collection.  Surprisingly, I knew who Vic Caesar was immediately, even though he is an even more obscure crooner.

Mitchell's main claim to fame, though, was as the voice of Fred Flintstone.  He was also one half of a Dean Martin / Jerry Lewis type comedy partnership, but it was Duke Mitchell that gave voice to everyone's favorite caveman.

Unfortunately, all this still put him on the sidelines.  His was not a recognizable face at the time, but I would say in recent years, at least with lovers of cult films, it has become one.

We begin with Mimi Miceli (Mitchell) and his fried Jolly (Caesar) murdering a lawyer named Lowenstein, and then taking out every single witness in the office building in which he works.  We then flash back to see what led up to this.  Micelli's father Don Mimi (Lorenzo Dodo) was exciled back to Sicily after the U.S. deported him for his crimes.  Although he still nominally pulls many of the strings behind certain organizations in the U.S., he is semi-retired and is doing his best to keep his son from following in his footsteps.

However, when his wife dies, the junior Mimi leaves his son with pops and heads out to Hollywood to rebuild the family's empire, hoping to gain sole control of the pimps and bookmakers in the Los Angeles area.  It's an ambitious plan, and, with the help of his old friend Jolly, he initiates it by kidnapping local boss Chucky Tripoli (Louis Zito) and using the ransom money to set up his organization.  Afterward, he and Jolly even have the chutzpah to attend the wedding of Tripoli's son and stealing the date (Cara Peters) of one his guests.

Things look like they are going to go Mimi's way, but he eventually runs into a barrier into bringing the city's pimps under his heel: Superspook (Jimmy Williams), who controls the largest number o prostitutes in the city, refuses to bow under, considering Miceli's way of doing things as ancient history.  In 11 years he has made a name for himself and some money, but he finds this situation tough to overcome.  It doesn't help that his own father loses faith in him when he and Jolly agree to hit a spokesman for the Sons of Sicily Defense Fund on live television, despite the Don's wanting the organization to go away.  He orders that Mimi stop the killing and go legit.

If you watch a lot of exploitation films, you will recognize a major problem with most of them.  They promise sex, violence and other titillating prospects, but rarely do they deliver.  You'll be lucky to see a few bits of red paint (maybe a squib or two if the budget allows it) and some grainy footage of a couple topless girls in a strip club as some fairly routine, and often boring, exposition plays out.  This movie goes by two other names: Like Father, Like Son (Mitchell's original title) and The Executioner, under which it was distributed on VHS during the 1980s.  Mitchell himself always preferred Massacre Mafia Style, and, for one of those rare times, it perfectly described the film.

Aside from getting the most shocking massacre out of the way in the beginning of the film, there is plenty of action and killing to go around.  It is obviously very low budget (they had to skimp majorly on an explosion), but surprisingly well done.  The movie was largely made as an answer to The Godfather, and in many ways was an attempt to demystify the mafia and show them as bloody, violent criminals whose ways were being eclipsed by an entirely new generation.  For all of Mimi's efforts, all his attempts to bring back the old ways do is get a bunch of people killed and himself back at square one.

Duke Mitchell and Vic Caesar are truly good actors, which shouldn't be a surprise since both of them had prior experience.  Not so much a number of the other people involved, as they were friends (or, in one case, Mitchell's wife) that were hired on for the bit parts.  Despite this inconsistency in the rest of the cast, Miceli's speeches on the immigrant experience of the first generation of Italian Americans and on the state of the old guard mafia at the time have the gravitas needed to pull off his character.

It is a pity this movie was largely forgotten for so long.