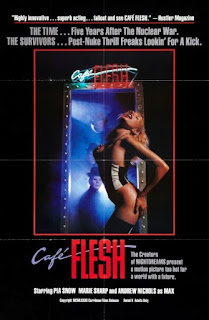 While that film in no way fit the format of my typical reviews, it got me thinking of one of the few adult films I have actually wanted to see over the years: Café Flesh.  It was a movie I became aware of in one of Denny Peary's books about midnight movies, and it intrigued me due to the fact that it was supposed be an actual movie rather than just an excuse for a couple people to say some stilted lines before getting their kit off.  And it was from 1982, long after adult directors had stopped pretending that there was any art to what they were doing.

It is five years after a nuclear war, and aftereffects of radiation has caused the majority of surviving human beings to become Sex Negatives.  Not just impotent, they become violently ill if they even engage in the slightest bit of activity, such as kissing or caressing.  This includes even with themselves.  However, there is a small group of Sex Positives left, and they are forced by a fascist government to perform in a string of clubs around the nation for the entertainment of the Negatives.  One of the most famous clubs is Café Flesh, run by Moms (Tantala Ray) and emceed by Max Melodramatic (Andy Nichols).

Max introduces the acts after viciously mocking the members of the audience, with particular ire toward Nick (Paul McGibboney), who regularly attends the shows with his girlfriend Lana (Michelle Bauer), despite the fact that he is disgusted with himself for doing so.  His self flagellation (and inability to fulfill any pun I would make on that) makes him fodder for Max's gibes and harassment by doorman Mr. Joy (Paul Berthell), but also makes it important that Lana hide a fact from him, and all others around her: while she pretends to be Negative, she is really Positive, and yearns for a normal - or what passes for normal in the post-apocalyptic world - sex life.

The need to hide is made even clearer when a new girl Angel (Marie Sharp) is brought to the club by Moms's talent scout Silky.  She is quickly outed as a positive when a government enforcer (Dennis Edwards) takes her into custody.  She soon returns to the club, not in the audience, but on the stage, going from virgin to skilled sex performer literally overnight.  Making things even more awkward for Nick and Lana is the arrival of the club circuit's biggest star, Johnny Rico (Kevin James).

Unfortunately, her secret is known by Max, who uses it to further antagonize Nick, much to Moms's displeasure, as she humiliates him in front of the club's patrons.  In revenge, as Rico and Angel perform on the stage, Max eggs Lana on to join them in his ultimate and final dig at Nick.

Like most films of its type, Café Flesh was funded partially by "legitimate Italian businessmen" who largely controlled the adult film industry until it largely moved to the West Coast and became evolved into a semi-legitimate industry of its own.  Director Stephen Sayadian (billed as "Rinse Dream") and journalist Jerry Stahl (under the nom de plume Herbert W. Day) hoped that, in the end, the film would end up getting cut down to an R-rating, as they were attempting to make an erotic avant-garde film about voyeurism and the inability of individuals to participate in the world they live in.  There were some other political points thrown in (two women dressed as a U.S. sailor and a Soviet soldier engaging in reciprocal activity was a not-so-subtle jab at the Cold War).

The actual sex scenes, all performed on the stage (and only by the clubs' performers; Angel and Lana are the only ones that transfer from audience to participant) are far from erotic, performed in costumes and largely in a mechanical, emotionless fashion, so it is quite obvious that in the end both Sayadian and Stahl were of the impression that they would get the chance to cut a good portion of the hardcore material and leave the weirder stuff, set to the music of experimental musician and producer Mitchell Froom (he actually composed the soundtrack, so no need to "borrow"), largely intact.  In fact, many of the "performances" would have benefited from the removal of these scenes, which is something that midnight movie houses typically did when playing this on the non-adult circuit.

Andy Nichols's portrayal of Café Flesh's emcee is the most memorable one in the movie.  A failed comedian before the war, he has found success after by constantly reminding his audience what they have lost and can never have again - something he is also familiar with, even though he has no dog in the current hunt.

Since this movie does aspire to be a real movie rather than just another feature for those wearing raincoats and clown shoes, it must be said that, despite the great set design throughout, it still barely seems to be a feature film largely because, other than a quick visit to Lana and Nick's apartment, all the action takes place within Café Flesh itself.  It is both a blessing and a curse, as the point about hearing about the outside world while spending all the time watching the stage and longing to participate is all part of the point.  Unfortunately, it also emphasizes that the movie was made in a confined space itself, and in some ways dulls its ambitions.

Still, it is interesting to watch and, despite being rooted in the early 1980s, this participant culture has just evolved and become worse over the last three-plus decades.  Also, before the sexual "infection" point is looked at too deeply, the beginning of mainstream recognition of the growing AIDS crisis was still a couple of years away.  Instead, the movie prefers to aim straight at the sensibilities of those who would be watching it for some sort of surrogate pleasure.