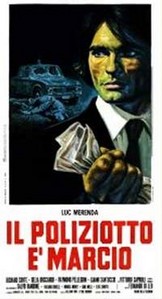 Of all my hobbies I can definitely say that my top two are record collecting and delving deeper and deeper into what cinema has to offer.  While I do not collect DVDs like I do records, there is a connection.  There is just over a century of material and, while that may seem like a blink of an eye in the history of humanity or, indeed, the world, it is still enough time to have created enough material to keep an interested person finding something new for a lifetime.

Which brings me to my first poliziotteschi, Il poliziotto e' marcio, retitled Shoot First, Die Later for international distribution.  The original Italian translates roughly to The Rotten Cop, which is much more appropriate than the attempts of U.S. posters to make it look like some sort of James Bond knockoff.

Domenico Malacarne (Luc Merenda) is Milan's top cop, gaining some unwanted media attention after he and his partner Garrito (Rosario Barelli) manage to chase down and arrest the perpetrators of a deadly jewelry store robbery.  He lives in a palatial space with his artist girlfriend Sandra (Delia Boccardo) that doubles as her art studio, a place he secured for her behind the scenes, and secretly enjoys some of the finer things in life.  Secretly, because a Milanese police officer's salary is far from adequate to fund his lifestyle.  For that he is on the payroll of local mafia representative Pascal (Raymond Pellegrin), for whom he looks the other way when it comes to getting tobacco and coffee into the country without paying the import tax.

The problem with Pascal is he is hot-headed and not very careful, much to the chagrin of his associate Mazzanti (Richard Conte).  His lack of control leads to the murder of a the son of a countess, which is complicated by the fact that a local man named Esposito (Vittorio Capriolli) reports it to the local carabineiri, or military police, in an office run by Domenico's dad (Salvo Randone).  Since Esposito is known for filing complaints and frequent lawsuits over small issues, his report is initially dismissed until the a couple children discover the murder victim encased in cement in a drum.

The fact that the report exists is enough to make Pascal nervous, although the elder Malacarne has no intention on following up on it and is unaware it has anything to do with a local murder case.  Domenico is tasked with retrieving the report and tries to take it from his father's office.  His father, following procedure, refuses to give it to him, but does agree to make sure it's buried.  Domenico then visits Esposito to find out what he knows - which is way too much.  This is a fact that he tries to cover up when he finds that Pascal's thugs have been trailing him to make sure he gets the report.  Domenico tries to throw them off, but they instead murder Esposito and the old man's cat.

Domenico's father puts two and two together when he is called to the scene of the murder, which the police are treating as a suicide.  Pops is nowhere near pleased to find out that his seemingly star policeman son is as corrupt as they come.  He eventually decides to do one last favor for his kid by delivering him the report before cutting off communication entirely.  Still, the very fact that he has seen the report leads to Pascal ordering his murder as well.

Angry about his father's death, Domenico takes the fight to the gangsters, killing the two homosexual killers that did in his dad.  In retaliation, Sandra is murdered, and a policeman is killed when he triggers a booby trap meant for Domenico.  Enraged at what has happened, he decides to go all the way to the top and take out Pascal personally.  It turns out that Mazzanti, forever in the shadows, has his own plans for both Pascal and Domenico as well.

I guess at this point I shouldn't been too surprised with the variety of Italian film making.  Because of Federico Fellini, Jean Luc Godard and other directors that are supposed to be the pinnacle of European cinema, I often expect even crime films to be treated in artsy, ironic fashion.  The largest aim of the Italian film industry, however, has always mirrored that of Hollywood: put butts in the seats.  Where a number of French crime dramas, on which the Italian poliziotteschi is partially based, there is still an attempt to put an art-school spin on it.  Not so here; even the hero characters are certainly flawed, but simple plotting and action are what rule the day, something they got from the contemporary police dramas coming from the United States at the time, like The French Connection.  In fact, there is not just one, but two major car chases in this film.

The major problem Italian movies have always faced is that their entire budget is about on par with Arnold Schwarzenneger's daily Muscle Milk intake while on set.  That is where many modern action film fans may have a problem.  Those car chases weren't cheap (and, at least with the first one, I'd say barely even legal), so despite the level of violence in the film it is largely bloodless.  Squibs cost money as well, and if you have to compromise by having gangsters go down largely like they're in a 1950s cowboy flick in order to have a major action moment, then it's pretty much worth it.

Bloodless doesn't mean there aren't some scenes that are hard to watch.  I really hope they put an air hole in that bag, because they didn't do the usual thing and cut away quickly to hide the fact they were using a stuffed animal instead of a real cat.  Also, Sandra's death is unbelievably brutal.

I was able to catch this in the original Italian, so it gave me a better handle on the acting that I would have got otherwise.  Luc Merenda is a French actor, while the majority of the rest of the cast is Italian.  As usual, it's dubbed even in its own language, which leads to some really strange line readings, especially on behalf of Rosario Borelli, who plays Garrito.  Merenda was obviously hired due to his traditional good looks, as it was obvious that director (and writer) Fernando Di Leo intended that to be a counterpoint to his "rotten" aspect.  Still, he's pretty good, playing the cool veteran officer to the hilt, while lost in a sea of everyone else overacting.

The exceptions to that would be Vittorio Caprioli, who is hilarious as Neapolitan transplant Esposito, often complaining about aspects of Milan while his fond memories of Naples make it sound even worse.  Also, Richard Conte provides a needed cool and dangerous presence as Mazzanti, who endures being second banana to the impulsive Pascal.

I think this is the first movie I have seen directed by Di Leo, although I know I have scene many movies where he wrote (or partially wrote) the script.  He is one of those unique directors who knows how to keep the camera moving so you feel there is action happening even when it's the exposition parts of the film.  He is also adept at keeping the plot on the rails, something that is often a problem with Italian directors, who are often more interested in getting a beautiful shot even if it makes no sense in the context of the rest of the story.

It's nowhere near perfect, but Shoot First, Die Later is a great introduction to this genre of Italian filmmaking, especially once you have exhausted all the similar American genre films from the same period.