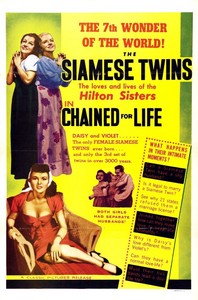 Many of the current crop of television shows owe quite a bit to exploitation films of the past, and it constantly amuses me to see genres that have generally been treated with eye-rolling scorn catch the imagination of mainstream audiences.  Sons of Anarchy, despite its pretensions toward being an update of Hamlet, was at its heart a good, old fashioned biker gang movie stretched out to multiple seasons. Orange Is the New Black?  Women in prison films - and this one enjoyed largely by women, who in the past would have walked in on something like Chained Heat screaming about how they can't believe men could watch such trash.

American Horror Story is a mishmash of many obvious influences, through (at first) seemingly disconnected seasons which eventually weaved into their own universe, with some of it being better than others - and much, especially in later seasons, feeling frustratingly random.  One of the random bits in the fourth season, Freak Show, was lifted almost wholesale from Chained for Life, but with enough changes (the twins were two heads sharing one body rather than the more realistic situation with the Hilton Sisters, the circumstances of their being accused for murder differ), but the story is quite similar in many ways.  And, to AHS's credit, they made the scenario work much better than the original movie did.

The story is told in flashback by Judge Mitchell (Norval Mitchell), who is trying a case of murder against Dorothy Hamilton (Daisy Hilton).  He is torn on how to rule on the case as her she is the conjoined twin of Vivian Hamilton (Violet Hilton), who was completely innocent in the crime.

The situation arises from a publicity stunt cooked up by Hinkley (Allen Jenkins), the manager of the show that the twins are a part of.  To drum up attendance, he pays trick shooter Andre Pariseau (Mario Laval) marry Violet.  The twins are quite aware from the beginning that the marriage is for show only, and agree.  Unfortunately, Violet becomes enamored with Andre, and starts to believe his feelings for her may be real.  In actuality he is a greedy womanizer, and has no intention of doing little more than dipping into Violet's funds before leaving her at the alter and going back to his assistant Renée (Patricia Wright).

At first the couple have trouble receiving a marriage certificate as there is fear that the marriage could be considered bigamy, and thus illegal.  They are able to find a sympathetic ear, and the marriage proceeds, much to the delight of Hinkley, as he sees an increase in attendance and profits.  However, the marriage is quickly annulled, as Andre leaves Violet on their wedding night.  Violet tries to keep a brave face, but, when given the opportunity to grab one of Andre's guns, Dorothy takes matters in her own hands to avenge her sister's heartbreak.

There are so many problems with this movie.  One is a major trend you see with early exploitation films: the fact that they are set up like educational films.  The judge talks directly to the audience, the pacing is something you may see in a "cautionary" tale about the dangers of drugs or touching yourself too much and the acting is barely functional.  A movie like Glen or Glenda, though paced much the same and similarly trying to deal with (at the time) human oddities, succeeds because it just goes 100 per cent off the rails and into surreal weirdness.  Chained for Life never ventures beyond the the conventional. That is also where American Horror Story: Freaks managed to take a loose adaptation of this story and be more successful.  That show is strange on so many levels, and if you are going to go with something so mundane to exploit in the first place you have to take it to extremes.

And, despite being conjoined twins, there isn't much that changes this from being a typical jilted lover scenario.  The Hilton Sisters played the Siamese twins role in Freaks, and it's as if someone looked them up (they were primarily stage performers - musicians rather than actors, in fact) and decided to cook this up and make some cash.  Unfortunately, the sisters were not really actors, and it shows.  In a movie with a bunch of unrecognizable actors hired on the cheap their performances come out to be the worst.  The musical numbers, of course, are where they truly shined.

The irony of it all?  The Hilton Sisters themselves experienced such a horrible upbringing (sold by their own mom to a "manager," suffered horrible physical abuse while trained to be on stage through two sets of caretakers before successfully becoming emancipated) and hardships through their life that a simple documentary about their lives up to that point, with them narrating and played in the younger years by better actors, would have been much more interesting and memorable than this hastily-produced potboiler.