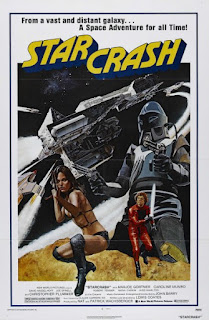 I remember back when I was a kid and Knight Rider was in its first run that I noticed Starcrash playing on the late show.  Even at that age I recognized it for what it was, and barely got through five minutes before shutting it off.  Needless to say, the reason I was even curious was because of David Hasselhoff, and I never even made it to any of his parts.

I also never made it to Caroline Munro in a leather bikini, which may have changed my mind at that point if I did.

Over the years I have seen this come up in many lists of bad movies that just have to be seen.  I finally got around to watching the whole thing and, as my luck would have it, right when it was coming up (unbeknownst to me) as an episode on the new Mystery Science Theater 3000.  Needless to say, they had a great time with it, and it was one of the highlights of the new season.

Stella Starr (Munro) and her navigator Akton (Marjoe Gortner) are fleeing from Imperial police when they come across an Imperial launch that has been badly damaged.  They stop to investigate, but their efforts get them arrested by Chief Thor (Robert Tessier) and his robot police companion Elle (Judd Hamilton).  Akton is sentenced to a few hundred years on a prison planet, while Starr is sentenced to life working in a radium mine in a leather two-piece.

12 hours in she's had enough, for dermatological reasons if no other, and plans an escape.  Initially successful, she is picked up once again by Thor and Elle.  It turns out, however, they were actually on their way to pick her up, as she and Akton have received pardons from the Emperor of the First Circle of the Universe (Christopher Plummer) and tasked with finding the planet in the Haunted Stars where the evil Count Zarth Arn (Joe Spinell) is hanging out and planning an attack on the Empire on behalf of the League of Dark Worlds.  Also, it turns out the Emperor's only son was aboard the launch they found, and they are to rescue him if possible.

A number of escape ships were launched when the main ship came under attack, and the first one they track is to a planet inhabited by Amazons and led by Queen Corelia (Nadia Cassini), who is in cahoots with Zarth Arn.  The group escapes an attack from the planet's giant guardian and waves of Amazon fighter ships to check out the next world, only to be betrayed by Thor, who has been promised the role of Prince of the League of Dark Planets for betraying the empire.  He tries to kill Akton and leave, but Akton, being able to see into the future, predicted the events and prevented the ship from leaving.  Elle manages to prevent Stella from dying on the planet's surface, and Akton uses his powers to revive her.

The next stop is a planet full of cavemen, where Elle is attacked and destroyed.  Stella is rescued by Simon (Hasselhoff), the last survivor of the ship that crashed on the planet.  After another attack by the cavemen, Akton arrives to give assistance and reveals that the planet, Devanna, is in fact the one they have been searching for.  They find a bank of computers hooked up to a doomsday machine, but, before they can destroy it, they are confronted by Zarth Arn and left under the watch of his mechanical Golems.  Zarth Arn's plan is draw the Emperor's capital ship to the planet, which is rigged to explode and take the ship with it.

Akton gives his life trying to escape, but not before the Emperor arrives and it is revealed that Simon is in fact the heir apparent.  With the Emperor's assistance they escape the exploding planet and prepare for a full-out attack on Zarth Arn's space station.

There is quite a bit in here that is obviously a ripoff of Star Wars.  It was distributed by Roger Corman's New World Pictures, and inspired him to produce his own knockoff, The Battle Beyond Space.  There are laser swords, intergalactic outlaws, smart-talking (this time with a Southern accent) robots, and many other things that make the connection obvious.  Still, Starcrash was largely conceived before Star Wars, and what director Luigi Cozzi took from the more popular movie was based him reading the novelization.  In truth, Cozzi was more concerned with making a movie that was a tribute to Ray Harryhausen, which led to the casting of Munro due to her part in Sinbad and the Eye of the Tiger and is the reason for the stop-motion golems and the Guardian on the Amazon planet.  The latter is a quite obvious reference to the giant bronze man Telos from Jason and the Argonauts.  Like Lucas, he also wanted to do something in the style of Buck Rogers or Flash Gordon.

While I enjoyed the stop-motion creatures, this movie has earned its reputation in other ways.  One is Munro's get-up throughout most of it.  Marjoe Gortner's hairdo and line delivery is another, but, truth is, no one could deliver this dialogue in any other way.  Christopher Plummer does his best with his part, but he has made it clear that the main reason he was there was for a few days paid vacation in Rome, for which he was more than happy to do the part.  It feels like a number of science fiction novels were cut up and reassembled into sentences that someone thought approximated English.

Caroline Munro gets many snide remarks about her acting in this, but it is hard to tell what is her and what is Marjoe Gortner's girlfriend, who ended up dubbing Munro's lines as she was not able to make it back for the recording.  David Hasselhoff was, and his character is both one of the less silly ones in the movie, but he also does a decent job.

A special mention should be made for the score, by John Barry, who it seems was kept in the dark about the movie itself out of fear that he would pull out of the project.  The music for this movie is wonderful, and I still wonder if Barry ever saw the finished product.

Today, this movie is still known for all the wrong reasons, but it is still an hilarious time to be had, even without the guys from MST3K taking their shot at it.