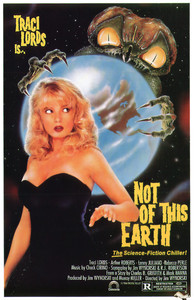 In the late 1980s direct Jim Wynorski bet Roger Corman that he could remake the 1957 movie Not of This Earth for the same budget (adjusted for inflation) and on the same time scale.  I have no idea who won the bet, but what resulted was the same movie, except with more modern dialogue and references, as well as a good deal of nudity.

To promote it, Traci Lords, fresh off her scandal of making a series of adult movies while underage, was cast in the lead.

An alien (Arthur Roberts) travels to Earth and hides under the name of Mr. Johnson.  When he seeks help for his blood condition from Dr. Rochelle (Ace Mask), he decides to hire nurse Nadine Story (Lords) to attend him privately for twice-daily blood transfusions.  Through mind control, he sets Dr. Rochelle on the path of trying to find him a cure, while being unable to tell anyone about Mr. Johnson's strange nature.

Transfusions are not enough, and Mr. Johnson finds himself going around town to get the blood of animals and people, leading to Story's cop boyfriend Harry (Roger Lodge) to become more suspicious about Johnson's nature.  He is also not happy to find out that the butler at the estate is a well-known small-time crook named Jeremy (Lenny Juliano).

It turns out that Johnson is the spearhead of a possible invasion force.  He is tasked with possibly finding a cure to a blood borne illness caused by various nuclear conflicts on his home planet of Davanna.  While he searches for a cure the political situation on his home planet continues to get worse.  Things are further complicated by the fact that his effort to send back specimens ends in failure, as the transport beam that works for his people tends to just rip apart humans.

Of course, it isn't long before everyone figures out what Mr. Johnson is up to, leaving Nadine in danger and Harry to come to the rescue.

Being a general remake of a movie (especially a Roger Corman movie) from the 1950s, there really isn't anything here that is too surprising.  It's not a shot-for-shot remake like Gus Van Sant's version of Psycho, but the entire plot plays out the exact same, down to the ending scene.  The main difference is that, while the original was played more-or-less serious, this remake is meant to be both campy and somewhat a parody.

While Arthur Brown does a great job of playing the strange Mr. Johson, the majority of the cast plays stock characters to differing degrees.  Wynorski fills the film with cameos of actors (usually in some stage of toplessness, although Monique Gabrielle shows up as a homeless lady trying to get the spirit of Elvis on her transistor radio), and the opening credits, featuring a number of different scenes from '80s New World releases, get even more self-reverential.

This particular movie is a nice distraction, but even among Wynorski and Corman films it is mainly there as a curiosity.  Always had some nice video box art, even if there are no bug-eyed aliens (rather, just strange people with sunglasses).