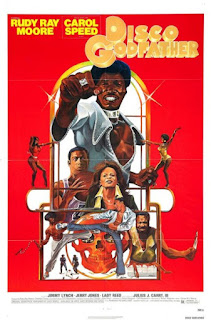 Coming across a Rudy Ray Moore movie unknowingly is a mixed bag.  At the time of viewing this, the only one I had seen was The Human Tornado, which struck me as somebody's vanity project.  Dolemite will get watched and reviewed here at some point, but, for me, a little of his "acting" goes a long way.

After watching Disco Godfather, though, I realized how important he was, silly movies aside.  His status in the African-American community at the time this movie was made puts it into much more perspective.

Tucker Williams (Moore) is an ex-cop that has opened the Blueberry Hill Disco and become the Disco Godfather.  A local celebrity and DJ, his club is now the most renowned in the city, and it understandably draws both good and bad elements.  The bad elements are pushing PCP to the inner city youth, a fact that Williams becomes aware of when his nephew Buck (Julius Carry), an up-and-coming basketball star, freaks out in his club and has to be hospitalized.

Williams begins to look further into the problem, speaking with the Dr. Fred Mathis (Jerry Jones) who runs the section of the hospital dealing with angel dust casualties.  He also speaks with his former colleagues to find out how bad the problem is and if they know who is supplying the drug.  Determined to rid his community of this blight, he goes to the press and, with the help of a local journalist, begins to raise awareness.

None of this sits well Stinger Ray (Hawthorne James), the man behind the production of the angel dust and also the owner of a basketball franchise that he intends to use as the cornerstone of a league to challenge the NBA. Turns out he used one of his players, Sweetmeat (Jimmy Lynch), to give the drug to Bucky in order to ruin his career.

The Godfather's investigations go largely nowhere until Ray orders an assassination on Williams, but then changes his mind, using corrupt cops to take out the assassins at Blueberry Hill before they can finish their jobs.  They leave behind evidence, however, that leads Williams to the officer that is leaking info to Ray, and finally to the kingpin himself.  His revenge may be thwarted in the end, as Williams is knocked out and wakes up, being forced to huff PCP through a gas mask.  He now must keep his head as he completes his mission.

Blaxploitation films were largely over a couple years before this came out, but it fits perfectly within the genre.  The music is great (well, if you like disco, which may be a sticking point for some) and the hallucinatory episodes that people have while on the drug (they all seem to have similar visions) involve zombies and a rabid angel of death.  Williams's own hallucinations occupy a good portion of the last act of the movie, giving this movie that weird factor it really needed after being a stilted anti-drug PSA through most of its running time.

And there is where the movie makes many missteps.  Too often it seems to take itself way too seriously, as if Moore was both trying to make art and do his civic duty, and the latter took precedence.  It almost feels like an After-School Special through the middle part of the movie, which is a good portion (the first half is basically dancing, roller disco and Moore telling everyone to "put your weight on it").  When things finally get going, the fight scenes are much better than in Moore's previous films (largely due to a stuntman doing the martial arts instead of him desperately flailing about) and it does come together more as a movie.

Another problem is the sound mixing.  I have no idea who did it, but there are points where you cannot hear the dialogue because the soundtrack is playing too loud.  I don't know if they didn't have actors take the time to go back and re-dub where needed or if they just didn't have the money.

Moore's performance is quite different than the Dolemite character, and at least he doesn't really have to fake the DJ scenes.  He saves the rhyming for these, so it doesn't clash with the rest of the film.  Too bad he is the only developed character.  Carol Speed, who plays his assistant Noel, is given even less to do than women normally have in these movies, and everyone else plays their characters to type.  It may even disappoint fans of Moore, who expect something much nastier from him, that this stays within '70s PG territory.

As for the main theme, happily PCP never became the scourge everyone thought it would be.  This movie did have something to do with it, pushing some of the worst reactions people had with the drug.  Maybe it actually did its job after all.