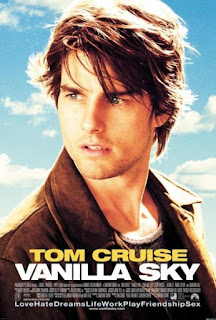 Rarely does a Hollywood remake of a foreign film get any praise from the director that made the original.  While Vanilla Sky did not get overwhelming critical praise when it opened, Alejandro Amenábar, director of Abre los ojos, said that this film was a complement to his original.  Two different, but they work together.

Though it still did decently at the box office, what it did largely was confuse and infuriate a fair share of its audience.  Tom Cruise was already losing people with his continual decent into Scientology.  His involvement in the frustrating final movie from Stanley Kubrick, Eyes Wide Shut, and the overexposure of his failing relationship with Nicole Kidman were doing more than a little to wear out the welcome of what was, at the time, the highest paid actor in Hollywood.

Against this background, and against a string of mediocre films, did this come out.  And, once again, it was a remake of a foreign film directed by Cameron Crowe, who was more known for romantic comedies like Say Anything and Jerry Maguire.  Truth is, it isn't all that bad, nor confusing, when viewed these days, even if many of the concepts are rather silly.

David Aames (Cruise) is a playboy publisher who seems to have everything going for him.  At a party, his best friend Brian (Jason Lee) introduces him to a woman he recently met named Sofia (Penelope Cruz).  David and Sofia quickly hit it off, leaving Brian frustrated and disappointed, though not surprised.  The one who is most upset, though, is model Julie Gianni (Cameron Diaz), who has been hooking up with David for awhile and has come to love him.

David spends the night at Sofia's, but the two do not sleep together.  Aames likes to delay his satisfaction, stringing along women until they give into him on their own, and he begins the same process with Sofia, only he begins to develop feelings for her from the beginning.  The next day he is confronted by Julie, and he agrees to discuss things with her on a car drive.  Problem is, her idea of discussing things is to commit suicide and take him with her.

Aames survives, spending months in a coma and coming out disfigured and bitter.  He is able to regain the ability to walk, but becomes more and more isolated as he believes everyone, including the board of the company he inherited from his father, are against him.  One night he goes to a club with Sofia and Brian, but makes an ass out of himself, believing that Brian and Sofia have become a couple and that the woman he loves his gone.  He falls asleep on the sidewalk, only to be woke up the next morning by Sofia, finding that she does indeed love him.

In addition, the doctors provide some good news: a new procedure will allow them to restore his face to the way it was.  For once in a happy relationship, and his grip firmly back on his company, life seems to be going well until it appears that Julie may have survived the car crash and is now stalking him.  In addition, he finds himself incarcerated for Sofia's murder, which he insists he did not do.  His court-appointed psychiatrist, McCabe (Kurt Russell), slowly begins to believe Aames that his incarceration, as well as the murder, may be a fame job instituted by his company's board in order to remove him from his position - or even something additionally sinister, centering on a company that offers cryogenic preservation in order to avoid permanent death.

I think what got most people (since, I am assuming, like me, they had not seen the original) is that this goes from some weird murder/mystery involving a sort-of manic pixie dream girl to an unexpected science fiction film.  I remember early reviews saying that the movie was confusing, but the ending rather clearly wraps everything up, as long as you take the explanation given to David at the end at face value.  Cameron Crowe has tried to say there are alternate ways of taking it, but I think he did so because he wanted the movie to have a bit more depth than it actually does.

As it stands, Tom Cruise's performance of a narcissist brought low by reality, and his inability to accept when reality cracks his fragile concept of what his world is like, is spot on.  Cameron Diaz is given some horrible, laughable dialogue, although in the end she plays crazy rather well.  Penelope Cruz played the same role in the original and manages to be mysterious as well as alluring.  That one-dimensional performance may seem like a detraction, but there are reasons for her being such a construct that are explained.  Same could be said for Kurt Russell's largely flat performance as McCabe, since it also serves a particular purpose to David.

There are a lot of strange background details, largely technology that most definitely did not exist in 2001 that Aames seems to have, that also make sense within the context.  Still, it feels like, though Vanilla Sky is an okay film, that many of these details are, once again, to give it depth that it really doesn't have.  In the end David has to accept reality in one way or another, but it never really feels like he learns anything from his experience other than, ultimately, his vast amount of money really does help him get whatever he wants.  Maybe that is why Cruise could play him so well.