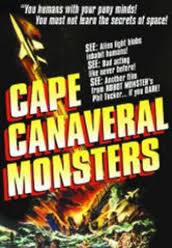 Phil Tucker is nowhere near as well-known as Ed Wood, Jr., but he is similarly known for giving us a classic of bad filmmaking: Robot Monster.  Put a diving helmet on a guy in an ape suit and... instant movie!  To be fair, a number of 1950s monster films consisted of a few brief filmed shots, following a well-worn plot and relying mainly on narration and stock footage.

The fact that almost any cheap thing could get kids to spend their allowance on a Saturday meant that more of these cheap films received distribution than would today.  After all, quality usually didn't matter, since most of the audience was more interested in exploring each other rather than watching the film.  That said, it is a testimony to the awfulness of Robot Monster that it is still well-known today.

While the Lenny Bruce films are largely worth mentioning because of Bruce's involvement, it is in the realm of bad sci-fi where Tucker shined.

A couple on a beach are possessed by alien light beings, causing their automobile to crash and the man's are to be severed.  They take the arm, determined to sew it back on once they get back to the lab in their hidden space craft.

The craft is located in an artificial cave near Cape Canaveral.  As the aliens plan to make way for an invasion force, their immediate goal is to make sure all rocket tests fail so that humanity does not reach space.  Problem is, they become revealed once the male, Hauron (Jason Johnson) has his arm removed again by one of the guard dogs.  His continued incompetence annoys his companion Nadja (Katherine Victor), who constantly reminds him that he was not her first choice as a partner.

Meanwhile, Dr. Meister (Joe Chester) is frustrated with the repeated failures.  Tom Wright (Scott Peters) informs Maj. Gen. Hollister (Chuck Howard) that he believes that there may be some sort of sabotage going on.  While parking with Meister's daughter Sally (Linda Connell) and his friends Bob (Gary Travis) and Shirley (Thelaine Williams), Tom picks up static on his transistor radio that sounds like a possible transmission and begins to track it.  It fades, but they return the next night to find it.

As he does, Nadja and Hauron, searching for a replacement arm, kidnap Bob and Shirley and bring them back to the craft.  Shirley's soul is transported to their home planet, while Bob dies during surgery.  Tom and Sally find the cave, but are caught in a stasis beam and held captive until Tom, realizing that his bonds are controlled by radium, uses his watch to to break free and go for help.

With Hollister and the local police in tow, Tom leads a group to rescue Sally and stop the aliens in their tracks.

This is listed on IMDB as being a TV movie, which would surprise me for something from 1960.  The gore level is a bit much (say what you will, they did a halfway realistic mockup of the results of a car crash), while Shirley is stripped of her clothing and Sally spends most of the time hanging around the ship in her undergarments.  Not that I minded the last part, since Linda Connell, in her only role, is the one bright spot here.  She's actually sexy in a nerdy kind of way (best kind of way, in my opinion) and probably would have been able to handle a more substantial role if given better material to work with.

The dialogue between Hauron and Nadja is hilarious - more that of a bickering married couple rather than determined alien invaders.  I would mention that the hills and deserts of Florida are filmed well - except, of course, that Florida is known for everything but hills and deserts.

I will give it to Tucker that he managed to churn this out at feature length without relying on cheats like heavy use of stock footage.  The makeup isn't bad, and it does seem like a little thought went into making this.  It is entertaining but, like his previous movies, for all the wrong reasons.