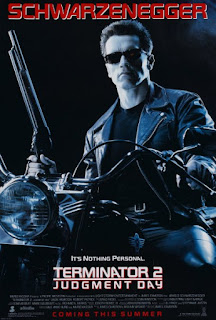 I think I said it in my review of Aliens, but John Cameron is the guy you want to go to for sequels. Unfortunately, it usually means the sequels that come after it will increasingly ruin the franchise, but at least for one shining moment you get something that tops the original.  Cameron does this here with a sequel to his own movie that, along with Aliens, put him on the map.

John Conner (Edward Furlong) manages to get born thanks to the efforts of his mother Sarah (Linda Hamilton) to vanquish the original Terminator (Arnold Schwarzenegger) that was sent to kill her and prevent Conner from leading a rebellion against Skynet and its army of machines in the post apocalyptic future.  Things haven't gone too well for John in the present.  He spent most of his young years traveling and living with fringe groups, and his mother is now in a mental institution for her insistence that a nuclear war will occur in 1997 and allow the machines to rise.

John himself has become a bit of a delinquent, hacking ATMs for spending money and doing whatever he can to act out against his foster parents.  On one of his forays he discovers that a cop is looking for him, but it's no ordinary cop; rather it is a new type of Terminator, the T-1000 (Robert Patrick), made from liquid metal and seemingly indestructible.  To combat the new threat, future John has reprogrammed one of the old Terminators and sent it back to protect him.

The Terminator wishes to get John as far away from Los Angeles as possible, but John insists on breaking his mother out of the institution.  After some initial resistance, John discovers that the Terminator must do as he orders it, and the rescue commences, with the added caveat that only non-lethal force be used.  They succeed and flee to a desert outpost, where the Terminator reveals to Sarah the history behind Skynet.  It turns out that parts of the original Terminator were discovered by Cyberdyne, and computer genius Miles Dyson (Joe Morton) was the one behind the project.  The team decide that they must kill him and attack him at his home, but relent due to reluctance to murder him in front of his family.  Knowing the truth of what he is going to do, Dyson agrees to help them break into Cyberdyne and destroy everything so that Skynet will never come into being.

The T-1000 discovers this attempt and goes after them to prevent them from succeeding, and to finally remove both Conners from the timeline forever.

Despite the failure of The Abyss, John Cameron still had enough clout and money to make Terminator 2 bigger than the original in every way.  Since the original was a big hit, there was little hesitation.  The truck and motorcycle chase at the beginning is up there as one of the best car chases in cinema history, and Sarah's dream of the end of humanity still left the entire theater speechless, just like it did 25 years ago.  Happily, there is plenty of story to hang on the action sequences, and also like Aliens I prefer the pacing of the cinematic version to the director's cut.

Looking back, it's not perfect.  Furlong's performance wasn't considered great back when the movie came out, and it's positively grating in a number of scenes now.  John Cameron also has a tendency to get heavy-handed when he wants to teach a lesson, a tendency that has not changed with him and was evident here, making many of the scenes between the action a bit awkward.

One of the surprises is that the early CGI holds up quite well.  Cameron had previously worked with computer graphics to make many of the alien effects in The Abyss, and used it to greater lengths with the T-1000.  I thought that this would look corny today, but it still manages to look better than most special effects in modern films.  A good portion of it is Robert Patrick's ability to display a cold, indifferent malevolence, but none of the T-1000 effects make the mistake of turning the villain into a horribly rendered cartoon.

It is still one of the best science fiction and action films of all time, and from here on directors increasingly made the stunts and chases in Arnold Schwarzenegger movies increasingly extreme and ridiculous, including Cameron's True Lies from 1994 (even though that was meant to be a comedy in many ways).  Schwarzenegger returned for the third sequel prior to forever tainting his previous career with a disastrous two terms as governor of California and personal scandals, and the Terminator franchise continues to circle the drain despite Arnie returning for the most recent sequel.  Watching this reminds me of a time when these movies were an event, rather than just an eye-rolling annoyance at our hopes for a return to this sort of quality in the series getting dashed once again.