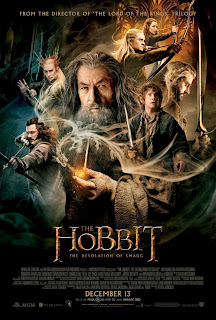 Prior to the events in The Hobbit: An Unexpected Journey, Thorin (Richard Armitage) is researching rumors that his father Thrain (Michael Mizrahi) may still be alive, although everyone believes he was killed by Azog the Defiler (Manu Bennett) during the Battle of Moriah.  While in Bree Thorin enters the Prancing Pony, followed closely by two obvious assassins who back off only after the arrival of Gandalf (Ian McKellan), who convinces Thorin to give up the search for Thrain and instead reclaim his ancestral home in Mount Erebor, triggering the events from the first film.

Back to the present, Bilbo Baggins (Martin Freeman), Gandalf and the Dwarves are fleeing Azog after their narrow escape.  Looking for refuge, Gandalf leads them to the dwelling of the shapeshifting Beorn (Mikael Persbrandt), who appears in the form of a giant bear.  Despite Beorn's disgust at Dwarves he has an even stronger hatred for Orcs, as they are responsible for the annihilation of his people. He provides shelter and helps the party reach the borders of the forest of Mirkwood.  Gandalf originally intends on accompanying them, but after having a vision of Galadriel (Cate Blanchett) he leaves to visit the High Fens, where the 9 human kings that received the rings from Sauron were entombed.  He promises to meet the party on the cliff overlooking Erebor, warning them to not stray from the path through the forest of they will be forever lost.

The party largely does as he says but soon lose their way after being forced into using vines to cross an enchanted river after finding the bridge out.  Off the path and lost they are attacked by giant spiders as Bilbo climbs a tree to get their bearings.  Using the One Ring to hide, he manages to free them and a battle with the spiders ensues.  The Dwarves are saved by the arrival of a party of Wood Elves led by Legolas (Orlando Bloom).  The Dwarves are imprisoned, while Thorin is taken before Legolas's father Thranduil (Lee Pace), who offers to let them go in exchange for retrieving the jewels he once presented to Thorin's grandfather.  Thorin refuses, and it appears that the Dwarves will remain imprisoned.  Still using the ring to maintain invisibility, Bilbo frees them and sends them out a river gate in empty beer barrels, pursued closely by the elves and a party of Orcs led by Bolg (Lawrence Makoare), as Azog has been called back to Dol Guldur and is no longer able to pursue the Dwarves himself.

As the river spills out into a lake they meet the smuggler Bard (Luke Evans) who agrees to sneak them into Laketown for a fee.  It turns out that Laketown has its own problems, currently ruled by a megalomaniac called the Master (Stephen Fry), who confiscates all the wealth coming into the town and has an army of spies to keep revolution from happening.  He is more than happy when he finds out who Thorin is and what he intends to do, especially when offered a share of the spoils.  Providing provisions and arms, the Master sends Bilbo and most of the Dwarves ahead on their quest.

Meanwhile, Fili (Dean O'Garman) lays wounded and his brother Kili (Aidan Turner) remains behind to aid him, and receives additional assistance from Tauriel (Evangeline Lilly), who, along with Legolas, arrive in Laketown at the same time that Bolg arrives to kill Thorin.

Meanwhile, Gandalf arrives at the High Fens and meets Radagast (Sylvester McCoy) who has worked out what happened, and they find the tombs empty.  Gandalf continues to Dol Guldur, while Radagast leaves to bring the news to Galadriel that Sauron has returned and is gathering a new army.  At Dol Guldur Gandalf is captured by Sauron and is unable to meet the Dwarves at Erebor, where they are about to find out that the dragon Smaug (Benedict Cumberbatch) is very much alive.

I didn't have the problems with the first Hobbit movie that most did.  Some people talked about the more ridiculous scenes, which were in the book, while also complaining about the parts that were added.  Personally, I thought it was a good beginning, and Desolation of Smaug was much better even in the the theatrical version.

However, the extended version is in some ways a different film.  The whole situation with Thrain is resolved, which for reasons I don't understand was left out of the theatrical version.  Strange, since it is mentioned in the opening meeting with Thorin, but never followed up on.  The trip to Beorn also no longer seems like an aside but an essential part of the plot.

While Richard Armitage is still significantly gloomy as Thorin, Martin Freeman still a bit wide-eyed as Bilbo (though more seasoned) and Ian McKellan playing Gandalf to the hilt, the performance that stands out is Benedict Cumberbatch's voice work as the dragon Smaug.   In the book Smaug has more personality than dragons of the past, and Peter Jackson and Cumberbatch both do a great job of bringing him alive.

Though an excellent watch in the theater, the quick action is easier on the eye when it comes to watching it on a small screen (just like the previous film) and, despite Jackson's additions, this is clearly in the spirit of Tolkien.  Also, while I typically have a major problem with CGI (I think too many movies look like video games these days - just with worse graphics in some cases), here it works.  Peter Jackson's studio is the definite heir to ILM and, while I would like to see more practical effects, I can understand how these particular movies require a bit more than the previous trilogy did.