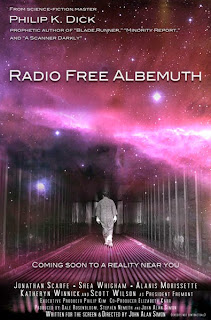 Nicholas Brady (Jonathan Scarfe) is a record store clerk living in Berkeley, California with his wife Rachel (Katheryn Winnick) and has a friend named Phil (Shea Wigham) who is a science fiction writer.  It is 1985, but the world is not the same as the one we are familiar with.  Mark Chapman shot Mick Jagger instead of John Lennon, all three Kennedy brothers were killed and President Fremont (Scott Wilson) has been in power since 1970.  Running on a strong anti-communist platform he has supposedly maintained his popularity and the Cold War has ended at this point.  Russia is now an ally.  However, Fremont continually uses his emergency powers to slowly take away the freedom of U.S. citizens under the guise of fighting a terrorist organization called Aramchek which is supposedly made of hard-line Soviet government officials who refuse to give up.

It is at this time that Brady starts receiving visions from Valis, telling him to move to Los Angeles and begin a new life.  Rachel, however, has just found out she is pregnant and is afraid that Nicholas's talk of Valis is some sort of psychotic delusion.  Phil accepts it at face value, though he is sad to see his friend go.

A year later Phil visits Nicholas and Rachel in Los Angeles, where Nicholas is an up and coming executive at Progressive Records.  Rather than stopping, however, his visions and instructions from Valis have become even more pronounced.  He convinces Phil to move to L.A. with them, which he does.  The government, however, has started to think that Nicholas's political loyalty may be wanting, and has him under surveillance, going so far as to have Friends of the American People representatives visit Phil in an effort to get more information.

In one of the visions Nicholas sees a singer named Sylvia (Alanis Morissette), who down the road actually comes to Progressive and applies as a secretary.  Slowly it develops that she has also been contacted by Valis and has been instructed to help Nicholas take down Fremont's regime.  Rachel is suspicious that the relationship is more than professional, but when it comes to light that the Valis satellite has been discovered by Russian scientists, she reluctantly allows him to do what he needs to do.

This version of Philip K. Dick's novel has been a long time in the making.  It was largely filmed in 2007 and went into post production in 2010, only to languish there due to lack of funds.  A Kickstarter campaign in 2013 provided what was needed to complete it.

So, was it worth all the trouble?  I definitely say it is.  I have seen many complaints about how the effects are not that great and about the pace, but for what it is that's just fine.  The effects are not what really matters anyway.  The fact is that Dick was writing a fictionalized version of what he thought was happening in his life, as he believed that Valis was a real force that controlled him and those around him.

Given that, in the movie version Phil (an obvious stand-in for Dick) is the more grounded person, neither merely tolerating the visions (as Rachel does out of her love for Nicholas) nor believing in them completely, but willing to support his friend and see where it goes.

Also, despite Dick's well-known mental state, some of the issues raised about how quickly people will give up liberty for safety and the general apathy of the public (largely due to major events being out of one's control) ring true today.  It also examines what a former apathetic person might do if suddenly those events are put, even in some slight way, under their control.

There is quite a lot that is examined beyond that, and that may be why many will find this movie off-putting.  It's a bit of a manifesto put to film, but still with an engaging world and plot to move things along.  Scarfe is at times manic and resigned, while Shea Wigham puts in the best performance.  Surprising, Morissette isn't bad either.  And don't worry - Robyn Hitchcock did the soundtrack, not her, so that would be worth picking up as well.