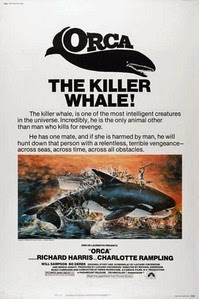 Captain Nolan (Richard Harris) becomes interested in capturing an orca after he sees one attack a great white shark he was hunting.  He plans on selling it to an aquarium.  Marine biologist Rachel Bedford (Charlotte Rampling) tries to discourage him, but he goes ahead anyway and botches everything.  Not only does he fail to get the male orca he was aiming at (nicking its tail in the process), but it manages to kill both its mate and the baby she is carrying.  The orca kills one of his crew in revenge and marks him for death.

Not believing that a whale (well, dolphin really) is intelligent enough to plot revenge, he refuses to believe the signs even after boats in the Newfoundland harbor in which he is docked are attacked.  Al Swain (Scott Walker), the head of the local fisherman's union, is a bit more upset because of the losses and the interference with fishing.  Also, Umilak (Will Sampson), a Native American whose tribe is from the area, says that this has happened in the past.

At first Nolan thinks he can reason with the beast, but after his house is destroyed and his crew member Annie (Bo Derek) has her leg bitten off by the killer whale, he knows he has no choice but to fight it on its own terms.  The local villagers have already made that clear, refusing to allow he or any of his crew to leave town.  So, with Umilak and Bedford joining him, he goes off to confront the creature - a journey which leads him to a final battle among the icebergs of the north.

This movie is obviously a cash-in on Jaws, and it makes no bones about it (especially having an orca kill a great white in the first few minutes).  It becomes so much more as it goes along as the whale becomes an antihero, plotting and obtaining revenge against those who murdered his family.  It quickly becomes less Jaws and more Death Wish if you replaced Charles Bronson with a whale.

It is a top-notch cast here, with Charlotte Rampling her usual uplifting self and Richard Harris as a modern Captain Ahab.  If you think about the movie too much it becomes unbelievably stupid, but that is also part of its charm.  Dino de Laurentiis actually got Michael Anderson, the man behind the camera for Around the World in 80 Days, to direct this, and it even has a score by Ennio Morricone.  The animatronic whales are quite lifelike, and it is obvious that quite a bit of effort was put into this, where similar films like Grizzly and Piranha were happy to be the exploitation films they were.

Truth is, I love this movie.  Maybe I'm biased because they used to play it constantly on network television in the early 1980s and it is part of my childhood.  I'm willing to overlook many of its flaws and just enjoy it for what it is and cheer the orca on throughout.