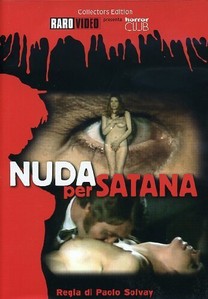 William Benson (Stelio Candelli) is a doctor called out on a stormy night to attend a medical emergency at a remote mansion.  While on his way there he gets lost and stops at a - well, a remote mansion.  The angry owner informs him that he has to go to the other side of the hill, but that the roads are dangerous.  Announcing that it is in fact an emergency, Benson takes off anyway, pushing his VW Beetle to the limit (so much that it sounds like a Maserati rather than the familiar bees-in-a-can sound of a VW engine).

On his way he sees a figure step out into the night.  Narrowly avoiding a collision, he manages (surprisingly for a horror film) not to end up flipping the car off the road.  However, as he gets out to see if the person is all right, he hears another car crash and sees a tire rolling by.  It seems that he was not alone on the road after all; Susan Smith (Rita Calderoni) was just behind him in her Morris (which seems to have still retained all four tires), and has become unconscious after her collision with - well, the air around this part of Italy must be rather solid.

Dragging her into his Volkswagen, Benson delivers a few medically expert slaps and determines that she is fine just by looking her over (an assessment I'm sure most viewers will be able to agree with). She quickly passes out again, and his car suddenly won't start, so he does what every good medical doctor does - leave a concussed patient passed out on a car in the middle of the road and go walking off toward another mansion (must be the neighborhood) that has appeared out of nowhere.  Well, mansion or castle; he meets a man in black who refers to it as the latter, before disappearing into thin air (although he just a moment before says that he was told to stay put).

At this point the movie stops making sense.

Well, not entirely.  First William enters and is accosted by who he thinks is Susan after seeing her briefly in a portrait.  She, however, calls him Peter and acts like they've known each other all their lives.  The opposite happens after Susan enters the mansion, although she gets to meet with the owner and a few of the servants (including a maid whose job also seems to be drawing baths and having lesbian sex with the bather).

Let's start with the good.  Rita Calderoni, clothed or unclothed, definitely good.  James Harris (credited as The Devil, but never named as such in the movie) is sufficiently evil.  There are some good directing touches here - Calderoni nude (but covering herself) superimposed over The Devil's eye, the negative portraits and many camera angles that do the job of expressing that our two heroes have fallen between the cracks of reality.  Luigi Batzella is at least a capable director.

Unfortunately, the rest is unintentional hilarity.  The above-mentioned car crash, bad dubbing not only on the Volkswagen but also on Benson (it sounds like Candelli read his own lines phonetically while on quaaludes) and that damn spider.  Seriously, you can get a better prop at a Spirit Halloween Store.  Okay, it is 1974, and those didn't exist, but giant rubber spiders did.  That giant octopus in Ed Woods' Bride of the Monster was more convincing.  And whose decision was it to film the thing head-on in full light with no fog?  At least most directors when faced with a prop that looks like it was slapped together by a 10-year-old wearing boxing gloves attempt to hide the ineptitude by adding copious amounts of fog.

If you do watch this you will ultimately end up doing so just to try and figure out what is going to happen next, and not in a suspenseful way.  It is more along the lines of 82 minutes of staring at the screen in disbelief that this movie actually exists or that anyone involved meant it to be a serious artistic statement (which, unfortunately, you kind of get the feeling in some places that it wants to be).  However, in the end, it's one of the few exploitation movies that delivers what its title promises: there is Satan, and there is nudity, so it gets points for accuracy.