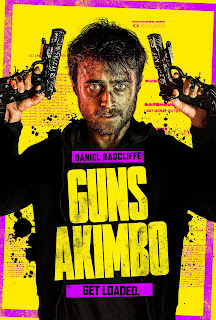 Jason Howden got lucky with his first film, Deathgasm.  It was made for around $500,000 dollars, half of it from the New Zealand government after his movie was picked out of a number of horror pitches to win the grand prize.  His previous experience had been working with Peter Jackson on the Lord of the Rings and Hobbit films, and his frenetic style of direction definitely was influenced by Jackson's earlier independent films.  While not a runaway hit Deathgasm did become a cult favorite.
Unfortunately, what happens these days is that many indie directors are quickly snatched up to do a big budget blockbuster, having their career pretty much destroyed once the studio execs start shaking their heads and hire a faceless army to reshoot and re-edit everything they did, but still leaving the director to take the blame.  Luckily Howden just went on to do a larger budget indie film, although going from half a million to 15 million, and landing a major name like Daniel Radcliffe, had to still be a bit of a shock.
Miles (Radcliffe) is a programmer for a pay-to-play cellphone game.  Disrespected by his peers, constantly berated by his boss and reeling from a breakup with his girlfriend Nova (Natasha Liu Bordizzo), Miles turns to trolling on the internet during his spare time.  One of his targets happens to be a shady website called Skizm, which features criminals fighting to the death in public.  Currently it's all the rage, so he cannot resist the comment section.  His comments eventually get the attention of Riktor (Ned Dennehy), the psychotic killer behind the site.
Miles is kidnapped and then returned to his home with guns bolted to his hands and 50 rounds of ammunition in each pistol.  He is told that he has 24 hours to kill Skizm's star, Nix (Samara Weaving), or he will be killed.  With no knowledge of guns outside of video games, and suddenly having to relearn to do a number of routine actions with guns for hands, Miles has no choice but to participate when Nix comes looking for him.  With the cops in Riktor's pocket and Nova Skizm's prisoner he does what he can to survive.  However, when he finds out Nix's secret, he finds a way he may be able to turn the tables on Riktor.
Just two movies in and I am already seeing a pattern with Howden's heroes.  They are typically powerless and, unlike a lot of the movies that he borrows elements from, they stay so.  Miles may have guns for hands, may be lucky enough to survive by constantly running away fast enough to where Nix can't get a good shot, but he's never used a gun before and can't hit anything.  Although the entire premise of the film is outside any true reality the ending, rather than being sunshine and rainbows, firmly sticks with being truthful on how something so outrageous would play out for everyone involved.
It's a weird role like many others that Radcliffe has taken on, and much of the enjoyment of the movie is Radcliffe's performance.  Guns Akimbo has lots of great comedic bits in it, but it is still an action movie on rails.  Pretty much everything one could expect from something like this happens except, thankfully, Miles and Nix falling for each other.  It has a number of video game references - often Nix snorting cocaine and getting a Super Mario-style power-up sound - thrown in, but throughout most of this it feels like Howden is borrowing from a number of similar movies like Crank and Hardcore Henry and, besides the comedic aspect, not really offering anything new.
It's still an enjoyable film, although it is not that revolutionary or memorable.  Unlike Deathgasm it does avoid a slow middle third, but except for Miles there wasn't any character to really latch on to.  Samara Weaving plays a tough, tortured female antagonist, but the role itself is pretty one-note.  Riktor, by comparison, is a decent villain, and Ned Dennehy has a lot of fun playing him.  Still, it feels like this has all been done before.
Guns Akimbo (2019)
Time: 98 minutes
Starring: Daniel Radcliffe, Samara Weaving, Ned Dennehy, Natasha Liu Bordizzo
Director: Jason Howden