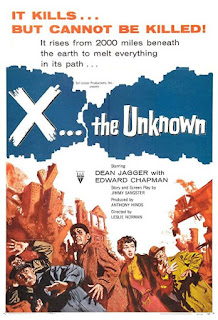 Hammer Studios didn't just appear out of nowhere remaking Dracula and Frankenstein films.  They were founded in 1934 and, while initially doing comedies, branched out into a number of different genres, finally finding success with nearly 20 years worth of classic fright films until they fell apart in the 1970s.

Just as Hammer didn't just materialize out of nowhere, neither did British science fiction.  Long before Doctor Who there was Professor Bernard Quatermass, an earthbound rocket scientist who found himself fighting aliens across three well-regarded British television series in the 1950s, and better known in the United States through a number of movies based on the show and the character.  The first of those was The Quatermass Experiment, the television version having suffered much the same fate as early Doctor Who.  Fortunately, in 1955, a movie version called The Quatermass Xperiment was released and did well in the United States (where it was released as The Creeping Unknown) as well as in its native United Kingdom.

Where Hammer comes in is that they were the studio that got hold of this property and, obviously wanted to get another Quatermass movie out as soon as possible.  X the Unknown was supposed to be that movie, but Quatermass writer Nigel Kneale wanted the second series turned into a movie - which Hammer released in 1957 as Quatermass 2 (otherwise known as Enemy from Space).  Thus, X the Unknown was quickly rewritten to change the hero of the film because, though no longer part of the series, was close enough in style that it was worth going forward.

While on maneuvers in Scotland a team of British soldiers discover odd radiation readings.  The ground opens up, and two soldiers receive major burns, with one succumbing to his injuries.  Dr. Adam Royston (Dean Jagger), an American scientist working for the British atomic energy department, is sent to investigate and is shocked to find no trace of radioactive activity anywhere - including the slugs the soldiers were using for Geiger counter training.

After a local boy is attacked and a series of deaths connected with attempts by something to get at radioactive material, Royston hypothesizes that they may actually be dealing with a creature that has been trapped under the Earth's crust for a few hundred million years and has come to the surface to feed.  Royston's boss John Elliott (Edward Chapman) scoffs at the idea, but Royston finds allies in John's son Peter (William Lucas) and Inspector McGill (Leo McKern), an investigator sent from London to see what is going on.  Attempts to contain the creature fail, ultimately leading to the deployment of an experimental device of Royston's to destroy the beast.

Like Hammer films would once they started on the Universal monsters, there is definitely an attempt to push the envelope on what they could show.  It helps that, at least in black and white, the melting skin effects are pretty good for the time, and I'm surprised they got away with showing as much as they did.  Also, unlike the usual plot line for American science fiction films at the time, Royston remains an older scientist, just like Quatermass, and skips the usual square-jawed hero and forced romance.

It was extremely low budget, so of course not all the special effects are great, but the blob-like radiation creature is quite well done.  Director Leslie Norman, though treating the movie more like a job for hire, still makes sure to keep the creature hidden long enough for the tension to build, and happily this is one of the better reveals.  Keep in mind that X the Unknown predates The Blob by a couple of years.

It is surprising that a good movie came out of this at all, through Nigel Kneale's objections to the use of Quatermass outside of his set stories to Dean Jagger refusing to work with original director Joseph Losey due to the latter being blacklisted for supposed communist sympathies.  Even Losey had looked at this as a job, since he was not getting work in the U.S., and Leslie Norman vocally did not want to even be there.

Despite all this we get another example of can-do British sci-fi with the best effects they could muster and a tight story that doesn't overstay its welcome or treat its audience like 12-year-olds.  There are still many examples of how blase we were when it came to handling a lot of radioactive material at the time, but at least it seems that they were starting to get some idea in their head that it could kill you - even though Royston still is happy to wear a watch with glowing radium hands that registers on a Geiger counter.  There is also no ridiculous scene in which Royston (or even his boss) decide they want to keep the creature to "learn from it."  Everyone is on the same page when it comes to getting rid of it.

Good acting all around, especially from Jagger and Leo McKern, and this stands out as one of Hammer's best science fiction movies outside their Quatermass films.