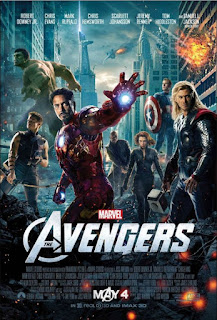 Iron Man was a huge risk in 2008.  Even by Hollywood standards Robert Downey, Jr.'s behavior had been outrageous enough to where he was practically blackballed.  Typically this is something reserved for someone like Mel Gibson, who managed to combine a sexist and anti-semitic rant all within the same traffic stop.  Downey had decide to clean up his act and, in doing so, got a starring role in what would become one of the largest movie franchises in history.

Over the four years a number of things changed.  Marvel Studios was sold to Disney, although Paramount continued to put out the films up to this point.  Iron Man itself got a direct sequel, while the Incredible Hulk, Thor and Captain America all got movies of their own.  The quality of the movies varied, but woven throughout were visits from Nick Fury, connecting the various films and moving toward the main heroes and supporting characters coming together in one movie.

The Avengers is that movie and, in 2012, it made over a billion dollars worldwide.  There were already concerns that some major blockbusters were never going to earn their money back no matter how well they did, but The Avengers had no problem doing it.  And, what's more, it is one of the few Marvel films that have aged well.

At the end of Captain America: The First Avenger, Steve Rogers (Chris Evans) is thawed out and the Tesseract, a glowing blue cube of unlimited power that Rogers tried to make sure never fell into anyone's hands, is now in the possession of S.H.I.E.L.D.  That is until with the help of the Other (Alexis Denisof), the leader of an alien race called the Chitauri, Loki (Tom Hiddleston) uses his scepter to interact with the Tesseract and create a doorway into a secret lab where Erik Selvig (Stellan Skarsgård) is trying to figure out how the cube works.  Nick Fury (Samuel L. Jackson) arrives too late, and Loki uses the power of the Tesseract to possess Selvig and Hawkeye (Jeremy Renner).

Going against orders, Fury begins to assemble Tony Stark (Robert Downey, Jr.), Steve Rogers, Natasha Romanoff (Scarlett Johansson) and Bruce Banner (David Ruffalo) in an effort to capture Loki.  They receive another ally in the form of Thor (Chris Hemsworth) who has arrived on Earth to stop Loki himself.  Loki's plan, it turns out, is to open a portal to let through a Chitauri invasion fleet, and the various superheroes are forced to overcome their own differences to repel the attack.

Interestingly, The Avengers almost became the first R-rated Marvel Universe film, but not for the reason that might be apparent.  It was because of one of the deaths in the movie caused by Loki - some at the MPAA thought it was too violent.  It was trimmed slightly and they got their PG-13 - making it the only movie with that rating that contains the words "mewling quim."  I guess it helps to slip extreme vulgarities in when they may only be understood by English majors, but I'm still surprised no one caught it, or that Disney hasn't retroactively removed it.  It's obscure, but definitely not as obscure as gunsel, which The Maltese Falcon famously got past the Hays Commission.

It is also spoken by Loki who, since he is getting a chance to return again after dropping off into a void at the end of Thor, becomes the first recurring villain in the series.  If it was going to be any of them, then it was nice it was him, since he is also one of the few villains in the Marvel Universe that does more than sneer, throw a few fireballs around and get vanquished.  He's quite clearly the bad guy here, trying to get back at his brother and father for what he sees are slights against him, but the signs of the more complex character he will become are already there.  Tom Hiddleston is once again enjoyable to watch in the role.

The Avengers is also the beginning of the "witty banter" that would begin to enter the series, thanks to Joss Whedon (who also directed) and Zak Penn.  It becomes a burden in later Marvel films, but here it seems fresh since everyone still seems to be deciding on if they like each other.  Stark as always seems at odds with about everyone, but Downey is not yet playing him as a caricature.  Chris Hemsworth makes a great Thor, but he has always been better in the other movies that featured him than in the Thor movies themselves.  His early standoff with Stark is a great highlight (without having to do an out-of-place action sequence with heroes that are not relevant to the film), even though I am wondering why no one except Fury was wondering why Loki didn't hoof it while those two were having their bro-down.

Central to the movie is Captain America, and Chris Evans continues to make Steve Rogers a modern version rather than falling into camp.  Natasha Romanoff, aka Black Widow, also gets developed a bit more rather than just being eye candy like she was in Iron Man 2.  We first meat Agent Clint Barton, also known as Hawkeye, briefly in Thor, and Jeremy Renner gets to look serious and shoot things with arrows.  It's not a big leap from his first appearance, but enough to make him a crowd favorite.

The reason The Avengers is still entertaining (and even more, I would think, with all the initial hype so far in the past) is that the special effects hold up.  A decision was made to make everything from the Helicarrier to the attack on New York look as realistic as possible.  It doesn't look overly filtered, and the action, rare for these days, doesn't seem to blur together on the screen.  There are still a few problems - Black Widow grabbing onto one of the Chitauri's flying bikes looks horrible (not to mention she would have done no more than lose an arm in reality), and Hulk's confrontation with Loki, though humorous and an important part of the film, still looks like he's throwing around an old Stretch Armstrong doll.  It was an effect that looked horrible in 2012, and time hasn't improved it.

While handling the effects in a specific way was a good choice, the movie, like most Marvel films, looks like it could have been directed by anyone.  I honestly don't know why they continue to grab name directors when none of their personality shows through in these films.  We are back to Hollywood prior to the late 1960s, where the director was basically told what to do and how to engineer what the studio wanted.  Whedon has never been the most creative director, but comparing this with Serenity shows where many of his own unique touches have been ironed out for The Avengers.

Still, in this day and age, it was nice that in the end Whedon and Zak Penn saw fit to provide us with a good story and a fine action film rather than going through the motions (like Whedon unfortunately would with Avengers: Age of Ultron).  The first phase comes to an end, and we get a surprise appearance from the being that will be at the center of many events going forward.  Unfortunately it also is a demarcation point where, except for the Captain America films, the quality smoothed out at the expense of the same movie being repeated over and over as new characters came on board.