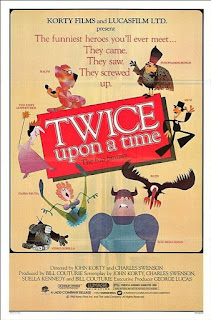 I often find the stories behind some of the movies I watch to be more interesting than the movies themselves.  Perhaps that is when it comes to strange cult movies like The Room the movie is spawns about the movie and the people behind it is often more enjoyable than sitting through the actual movie.  Twice Upon a Time thankfully is not anywhere near the level of terrible as The Room; in fact, it's not terrible at all, and is at times quite interesting to watch. It's just that its history and its ultimate fate is more interesting than what got made.

At the time Twice Upon a Time was made, Ladd Company, the studio that made it, was going under.  They also made The Right Stuff at the same time which, even though it didn't keep the studio from going bankrupt, has become a classic of the 1980s, while this little cartoon as largely disappeared into obscurity.  The story was largely written by John Korty (who also directed) and Bill Coutourié, along with Suella Kennedy.  A story book was released to tie in with it, and Korty largely meant the movie to appeal to younger children.

Problem is, test audiences didn't necessarily include children, and some screenings experienced entire walkouts.  The original script, rather than being strictly a children's tale, featured the Synonamess Botch, the villain, using a variety of salty language.  After witnessing one of these walkouts, Coutourié decided it would be better to go with the version that was closer to the script rather than the cleaned-up version Korty favored.  It wasn't hard to redo, as it meant using some of the alternate takes (a good portion of the dialogue was improvised by the voice cast) and getting some of the voice artists back to add more lines.  The revamped version did test better.

However, Korty was not made aware of any of this.  At the premiere he was shocked to find out which version was playing, as were parents at the few theaters in which Twice Upon a Time was paired with The Secret of NIMH.  When the cartoon made it to HBO, Korty was again upset to find out it was not his version, and forced them to replace it with the one he favored, which then led those who had liked the movie to accuse HBO of censorship.  The result, in the end, was HBO refusing to show it at all.  With different versions on the market when it finally got to video in the 1990s and bootlegs floating around of the original theatrical release, it remained an obscurity, and largely does to this day, despite George Lucas being an executive producer (and Lucasfilm backing the movie) and early work by director David Fincher and animator Henry Selick.

While I would love to talk about how Twice Upon a Time is an unfairly disregarded classic, truth is it was fated to be a cult film all along.  Even for the 1980s it is severely out of place.

Synonamess Botch (Marshall Efron) dwells in a place called the Murkworks, where he creates nightmares to inflict on the Rushers of Din, human-like creatures that live in black and white and spend their entire day going from place to place and look forward to the good dreams brought to them by Frivoli, courtesy of Greensleeves (Hamilton Camp) and his Figmen of Imagination.  Botch, villain that he is, wants to fill the world with nightmares, and decides to kidnap Greensleeves as part of his plan to steal the mainspring from the Cosmic Clock so that he can stop time long enough to seed the world of Din with nightmare bombs.

Frivoli is so involved in living up to their name that the letters of warning from Greensleeves go unanswered until his niece Flora Fauna (Julie Payne) discovers his letters for help in the Garbagery.  It also happens that two screw-ups, Ralph the All-Purpose Animal (Lorenzo Music) and his friend Mumford have been given a last chance to prove themselves.  Hearing of Greensleeves's predicament, they decide to become heroes, and unfortunately are at first deceived by Botch into doing his bidding.  Soon, though, with the help of a Fairy Godmother (Judith Kahan) and a hero-in-training named Rod Rescueman (James Cranna) they manage to set things right.

The version I saw was the adult version, and even without Botch's mildly foul mouth I still cannot see this movie appealing to children.  The animation style was one made up for the movie called Lumage, which meant using cut-outs on a light table to as the main animating method, with some live action and stop motion added in throughout.  Some of the dialogue (particularly Ralph trying to grasp the concept of time) is interesting, but definitely above the level of the audience John Korty was aiming for.  Also, the portion animated by Henry Selick, which is a nightmare scene set in an office, may have been too good at producing just that in younger viewers.  Bill Coutourié was right in which version should be released, as a more family-friendly version just would not work.

It is also hard to focus when, early on, some of the dialogue doesn't seem to fit the characters.  It gets better as the movie goes along, especially as Mumford becomes the source of more and more creative sight gags.  It's almost as if the portion between Greensleeves's capture up to the point where the heroes arrive at Murkworks was cobbled together from cutting floor leavings and random sentences edited together.  While the Fig Men and the Vultures competing for the dreams of Din is a good opening, I can understand why many audiences walked.

That is a shame because there is a lot of creativity going on once things do get in motion.  While the main plot is a bit on the weak side, the sequence inside the Cosmic Clock is brilliant.  However, that is eclipsed by the nightmare sequence, in which Ralph and Mumford are attacked by various pieces of office equipment, in many ways a precursor to Selick's short film, Slow Bob in the Lower Dimensions, that was released about eight years later.  We also get a salty Fairy Godmother giving us a taste of Borscht Belt humor, which is a perfect touch.  Throughout Ralph and Mumford develop personalities, which unfortunately are missing at the beginning.

The frustration is that there are so many good parts to this movie that I can look at them and think how good the whole thing could have been.  Years went into making it, just to have almost no one see it except a devoted few, and even after all this time even the preferred version seems half-formed and slapped together.  If anyone involved had an idea at the beginning of what type of audience they were going for, and if it had not been a work-intensive project from a dying studio, it could have been much better. 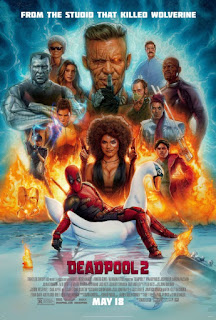 Most movies automatically lend themselves to a sequel, whether they want to or not.  If it is successful then it seems that money, if not creativity, will find a way.  Since Deadpoolwas a bit of a gamble  to begin with, it was surprising that a sequel was greenlit even before the movie hit the theaters.  Even more surprising, unfortunately, was that the director of the first split early on with Ryan Reynolds over creative differences.

If it wasn't for Reynolds's commitment to the character the second film could have easily ended up in development hell (something that it is possible that the second sequel or the upcoming X-Force series may suffer now that Disney has purchased 21st Century Fox and begins to purge anything that doesn't fit their agenda).  Even worse we could have ended up with a film that stained the first one just by merely existing.

Deadpool (Reynolds) has been out slicing and dicing bad guys, but realizes he better make it home for his anniversary.  In tr…
Read more