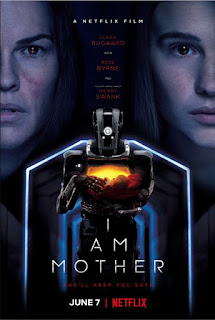 There has always been a major gap between literary and cinematic science fiction.  There are exceptions (usually for the youth market in the past, although young adult novels have significantly changed), but even in the Golden Age of science fiction, where many authors knowingly got the science wrong, the focus was largely on ideas.  Aliens, robots and giant spaceships were background; typically the focus was on the human condition and moral dilemmas.  Look at most classic (and modern) science fiction literature and you find the big bad guy is usually something humans brought on themselves.

On the big screen it has always been spectacle that stood out.  Arguably 2001: A Space Odyssey is a much better movie than any Star Wars film save The Empire Strikes Back, but even a large part of 2001's audience were there to watch the light show at the end rather than to ponder humanity's ultimate evolutionary end and place in the universe.  Watching World War II style dogfights in space underpinned with Campbell's heroic archetypes and references to old samurai films gets more butts in seats in the long run.

The idea that a science fiction movie must be a big production predictably leads to the inevitable fact that you are going to need a good amount of money to realize your film.  Sure, Star Wars in many ways was an independent film that somehow looked like it cost much more than it did, but almost everything that followed meant an investment in a questionable return.  Blade Runner tried to combine the best of both worlds, and, despite its reputation today, financially failed.  The bigger productions started to return as computers made effects easier, but some strange things happened in the 1990s: Gattaca, while not directly written by Ray Bradbury, brought that Bradbury spirit to the screen for the first time in years, with a science fiction movie that was aimed more at the brain than the eyes.  Babylon 5 was a television show that adapted computer graphics early on, but the emphasis was on evolution and spirituality.

Ex Machina may not have broken box office records, but it took queues from Babylon 5 and a number of current Canadian science fiction shows: who needs tons of battles when you have set design and great writing?  You put some money into effects, but where needed rather than just to fill the screen with pretty lights.

I Am Mother is a completely different story than Ex Machina, but inevitably comparisons arise when considering the claustrophobic settings and both exploring the relationship between AI and human beings, although I Am Mother borrows unabashedly from Terminator in some ways as well.  Still, where the trailers for this Netflix film unfortunately make it look like the a number of television shows and movies that have come out recently where a sheltered person discovers "the truth" of what is out there.

After a worldwide extinction event, a droid called Mother (Luke Hawker, voiced by Rose Byrne) is tasked with guarding a facility filled with human embryos.  She picks one out, raising it within the facility and referring to her as Daughter (Clara Rugaard).  Their relationship is largely good, with Mother educating Daughter on human history as well as philosophy and morals.  Inevitably Daughter starts to become curious about what is outside, despite Mother's warnings.

The peace in the facility is shattered due to the arrival of a wounded woman (Hillary Swank) from outside, where supposedly nothing is supposed to be able to live.  The woman is immediately concerned with Mother, as it appears that the outside world is patrolled by droids that are similar in configuration.  Daughter soon finds out that both Mother and the stranger have their own agendas, and is forced to forge her own path based on what she learns.

This is Grant Sputore's first feature length film, and as long as he doesn't get grabbed to head some big-budget project that is doomed to failure, he may have a good future ahead of him.  The story was cowritten by Michael Lloyd Green and Sputore, and refreshingly changes many of the aspects one would expect after years of watching machines and humans duke it out in apocalyptic wastelands.  If you are expecting Daughter to suddenly become some toughened warrior, you are in for disappointment.  When it comes down to it, the woman who is presented as the Sarah Connor analogue subverts those expectations as well.  Mother is certainly self-aware, as well as surprisingly self-righteous for all her knowledge of morals and philosophy putting her decision beyond the simple logical conclusions of a supercomputer like Colossus, but in many ways fails to live up to the moral standards she sets up for humanity.

The effects are by Weta, the company that normally works with Peter Jackson and films that he involves himself in.  The robot suit is impressive, and if you have played Portal you will definitely see where some of the inspiration for the design (and some tangential parts of the story) came from.  It is a brave mood to make it a suit worn by an actor rather than a digital effect, but it does help that Clara Rugaard is given something real to work with rather than having to stare at a stick in front of a green screen.  It also is easier for the audience to accept Mother as a real character.  I believe the other robots are digital, but they are silent soldiers that do not have Mother's seeming human traits.  The machine effects and general set design are impressive.  It is when Daughter gets to see the outside world where things fall apart a bit, as it looks like some of the backgrounds were not integrated properly, or that some parts of the latter part of the movie were left in a rough design stage.

I was impressed that Rugaard didn't get cast in the usual mopey teenager role.  Instead she's intelligent and curious, her growing obsession with the outside world originally being more for knowing rather than escaping.  Her ideas of escape are planted in her head by the stranger, and Hillary Swank effortlessly brings a desperation and brokenness to her character that unfortunately Daughter doesn't understand until later.  Both are good together, which is important given that they are really the only two humans we see.

I Am Mother does delve into philosophical questions about whether it is morally correct to commit a major wrong when the ends truly have long-term justification.  It definitely opens up the question if this long-term justification, even if formulated by a supposed infallible being, is morally correct when the instigator cannot seem to stick with their own stated moral path.  Is God meant to be a creature that micromanages every molecule, or a parent that knows the right time to back away and let its children make their own way?  Wisely, there is no attempt to neatly wrap all this up in the end, and given the choices Daughter ultimately takes a path that is much more realistic and altruistic than Mother probably expected.

This is not a perfect movie by any definition.  It may push two hours, but I still find some of the concepts presented rushed, and certain elements that feel they are vague due to sloppy editing, writing or both, rather than just trying to be clever.  A little more time in post-production, especially when presenting the outside world, would have helped. It is still a welcome sign that Netflix is getting a little more picky about what it puts its stamp of approval on instead of following down the path of Asylum-produced junk that SyFy has.