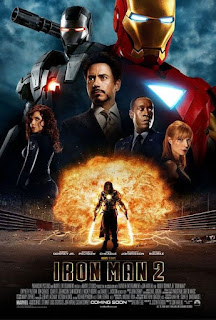 Despite the budding desire to start an entire Avengers universe (now known as the Marvel Cinematic Universe), The Incredible Hulk did not exactly blow audiences away the same way Iron Man did.  However, it still made money, and Iron Man was a popular film, so now Marvel was committed, and became even more committed to creating their universe - much to the chagrin of Jon Favreau, who soon found himself bogged down with notes from Marvel execs on how Iron Man 2 was supposed to go.

There were some other problems rearing their heads, even this early in the game.  Marvel, despite its decades-long popularity, is famously known for treating its talent like garbage.  This unfortunately seemed to pass on from the comic book world to the movies as Terrence Howard, who had played Lt. Col. James "Rhodey" Rhodes in the first movie, soon found out.  The role was expanded, but Howard's paycheck was not, leading to suddenly changing the actor in what would be a major role supporting position this time out.

It is no surprise that a number of fans took these behind-the-scenes problems as a chance to dump on Iron Man 2.  If there is one thing the Internet loves it's backlash, and Iron Man had just been way too popular not to be a target of the crowds that just show up to say that something sucks and the critics who put their finger in the air to test which way the wind is blowing so they can hang out with all the cool kids.  After all, you don't want to trip over yourself praising a movie when a year later a vocal minority of humor and list sights will be blasting a film everyone loved just because everyone wants to be in on the joke.  Do you really want to be that guy who gave Avatar or Star Wars: The Force Awakens a good review?  Dude, do you even nerd?

When it comes down to it, however, entertainment is meant to - get this - entertain.  General audiences understand this, and if there is one thing Marvel does understand regardless of often being the type of evil corporation some of its writers and artists cast as plot villains, is how to entertain.  It's something Favreau also knows, as well as screenwriter Justin Theroux.  In pure entertainment value, this sequel is the equal and, often, sometimes the better of its predecessor.

Immediately following the announcement of Tony Stark (Robert Downey, Jr.) that he is in fact Iron Man, many of the world's more questionable regimes and corporations attempt to duplicate his creation, often with disastrous results.  The U.S. government wants his suit, and Stark is brought before a Congressional committee, led by Senator Stern (Garry Shandling), in order to intimidate him out of it.  One person brought in to help Stern is one of Stark's competitors, Justin Hammer (Sam Rockwell), who has had little success in his own project.  The other side effect of the suit is that for the six months following his announcement everyone who would want to make trouble has lain low.

This period of piece comes to a close with Ivan Vanko (Mickey Rourke), the son of a Russian physicist who helped Howard Stark (John Slattery) build the arc reactor, creates his own version from the blueprints his father kept.  He uses his homemade suit to attack the Monaco Grand Prix and also attempt to kill Stark.  He is thwarted, capture and imprisoned, but sprung by Hammer as he sees a chance to finally make the advances that have eluded him.  Also, the military suddenly finds itself in possession of one of Stark's suits courtesy of Rhodey (Don Cheadle), who absconds with it after a destructive fight with a drunken Stark.

As Stark's behavior becomes more erratic he turns the company over to his assistant Pepper Potts (Gwyneth Paltrow) and promotes a new assistant from their legal department, Natalie Rushmore (Scarlett Johansson).  What no one realizes is that Stark is quickly dying due to poisoning from the palladium cores that he uses in the miniature reactor that keeps him alive.  Also, Rushmore is much more than she seems, and Hammer soon regrets allowing Vanko to take over his pet project.

As much as I like Iron Man and the fact that it avoids many typical super hero plots to concentrate on more mundane things such as corporate intrigue, one of my biggest problems was that everything leads to an exciting, but brief, battle before the whole movie comes to an end.  It was like a giant firework that you wait all year to launch, and when you do it's just one loud bang and a bright light - still fun, but nothing like it was built up to be.  Iron Man 2 makes up for this, giving us one of the most exciting sequences in the Marvel Movies with Vanko's attack on the Grand Prix, as well as a satisfying climactic battle pitting Stark and Rhodey against an army of drones controlled by the mad Russian.  Rourke's portrayal of Vanko may not be anywhere near as multidimensional as Jeff Bridge's version of Obadiah Stane, but he doesn't have to be.  All his motivation is his vendetta against Stark, and Rourke just has to make him physically intimidating and evil, with an underlying brilliance.  It's all there, and in this sense he complements the amorality of Justin Hammer, a part that Sam Rockwell plays with hammy, scene-stealing glee.

Robert Downey, Jr. is quite comfortable in the role this time - perhaps a bit too comfortable, as I do see the roots of Stark becoming a caricature, but there is a little added tension in the question of whether he may get an early screen death.  With Rhodey obviously a good guy, it would not have been out of the question that he might take over as Iron Man if Downey left early on, but that obviously didn't happen.  While Terrence Howard did a good job in the role of Rhodey in the first film, he was a background character at this time.  There's no real saying that Don Cheadle did a better job or that the two are interchangeable, as Cheadle was simply given more of a character to work with than Howard was.

There are flaws, but there are few Marvel movies without them.  We are already seeing a conscious effort to shoehorn characters that would appear down the line in The Avengers, with Nick Fury (Samuel L. Jackson) having a slightly bigger, but still intrusive and not fully developed, role.  At least in introducing Black Widow, Scarlett Johansson plays some part in the plot other than just being eye candy.

One of my big problems with The Incredible Hulk was that the CGI effects were a huge step down from the late Stan Winston's effects used in Iron Man.  There is a notable larger use of CGI than practical effects in Iron Man 2, but once again they hold up even close to a decade later.  It may help that many of the effects were kept within the realm of explosions, electrical arcs and lasers, as well as concentrating heavily on making the suits believable.  A return to a human villain rather than fights between doughey-looking monsters was a smart move.

We are still largely in set-up mode here, and, while entertaining, for me the Marvel Universe didn't really start getting interesting on a story-telling basis until Captain America: The First Avenger.  Still, the fact that some of these first few movies work just as well as standalone films as they do as part of a larger story arc is refreshing.  I don't feel the cinematic deja vu I often encounter when watching these films.  Iron Man 2 should have been a dumpster fire considering all that was occurring around it, including a writers' strike, but still turned out to be one of the better films in the series.