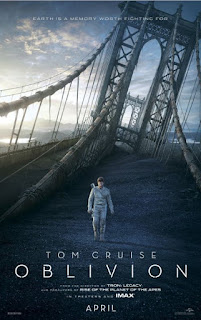 It is perhaps not the best idea to star in two alien invasion films back to back within the span of a year.  Because almost every trailer seems the same these days, as does most of the big-budget sci-fi spectaculars, they tend to all jumble up in my brain unless something really stands out.  Edge of Tomorrow stood out because it started to get some serious attention after it was out of the theaters and people started to realize it was actually a pretty good movie.  Oblivion, on the other hand, didn't do too bad in theaters, but it also stars Tom Cruise, and I am quite sure that at least for a time I couldn't remember which film was which.

For the record, Edge of Tomorrow is definitely the better of the two, and it was helped to stand out more by the fact that its own confusing marketing (the tagline "Live, Die, Repeat" being bigger than the actual title, thus leading many to believe that was the title of the film) where there is nothing really that stood out about Oblivion.  Indeed, on the surface it looks like just another in a long run of effects-heavy films fueled by star power.  It is a bit of that, but it still has a bit more going for it than just some surface luster.

Cruise plays Jack Harker, a human left on Earth to help keep security drones in working order as large machines drain the oceans to provide power for a human colony which has fled to Titan.  It is now 2077, 60 years after an alien race called the Scavengers (or Scavs, for short) destroyed the moon, causing a shift in Earth's axis and a series of natural disasters that crippled the human race.  The Scavs then sent in ground troops, but humanity eventually prevailed - at a price.  The use of nuclear weapons left most of the world uninhabitable.  Now, a giant space station called the Tet waits in orbit for the machines to finish harvesting the ocean.

Harker lives in a glass tower with Vicka (Andrea Riseborough), who performs the role of making sure he is safe out in the field.  The two of them report to Sally (Melissa Leo), their commander on the Tet, who is in ultimate control of the drones.  Scavs still roam the Earth, sabotaging the drones and attempting to kill Jack any chance they get.

The problem is Jack seems to be having dreams that he shouldn't.  They involve Earth before the war, specifically New York, and time spent with a woman (Olga Kurylenko) he seems to be in love with.  In fact, his obsession with the old world has extended to him collecting artifacts, including books and records, which he has taken to an isolated cabin he built near a lake, unbeknownst to Vicka or Sally.

As can be predicted, not all is as it seems.  The Scavs set up a signal for a landing site, which happens to draw in a pre-war ship with inhabitants in hibernation.  The one he is able to save happens to be Julia, the woman of whom he has dreamed of.  He also soon finds out that he and Vicka are not the only humans left on Earth after discovering an underground colony led by Beech (Morgan Freeman) and his right-hand man Sykes (Nikolaj Coster-Waldau).  With both Vicka and Sally turning against him it comes down to Jack and Julia to discover what really happened to Earth and set things right for humanity.

This is another one of those movies that many people seem to think is confusing, or at least gets so toward the end.  Personally, it makes me rather concerned that the concept of a flashback is enough to confuse audiences these days.  The last part of the movie largely explains everything that happened to Jack, Julia and Vicka, as well as how things came to be, by flashing back as Jack regains his true memories.  It is one of the oldest narrative tricks in the book.

What may have caused the confusion is that a good portion of the audience may have dozed off at some point.  This not just supposition; many reviews I have read of this film, from those who saw it when it came out, was that at some point they drifted in to the land of Nod.  Where I would like to say something snarky about attention spans, I really can't blame them.  There seem to be periods in the film where nothing much really happens.  This either leads one to start drifting off or to start contemplating things - like how it is more likely that destroying the moon would cause fragments to rain down on the Earth and destroy humanity quicker than waiting for tidal forces to do so, and there would be little need of ground forces.  In fact, if the moon, even in fragmented form as in the movie, still orbited, most of the mass would still be there and wouldn't affect things nearly so much as intimated.

Also, why is New York buried in what looks like thousands, or even millions, of years of sediment?  It's neat to look at, but even with earthquakes and tidal waves there is no way that can happen in that short of time.  Back to the whole thing with the moon: if you have the power to do that, why do it at all?  Demonstrate on a decent sized asteroid and you'll probably get your point across.

You want a movie that makes people think but you want one that gets people thinking about the concepts you bring up - not about how illogical the entire setup of your movie is.  That's a shame, because there are things that the movie gets right, largely when it comes with the combat drones and how they are designed and behave.  They are semi-autonomous and are built to do dual duty in space or on land.  Even the ship that Harker flies is designed for a fully three-dimensional environment, and not necessarily a terrestrial one.  Even the Tet seems logical design for a space vessel, not wasting time with a lot of the add-ons that many science fiction movies like to give to a ship to make it look cooler.  That was always something I liked about the design of the Borg cubes in Star Trek; they made more sense, design-wise, for an interstellar ship than the Enterprise, which seemed to have many parts that were just there to look pretty.

The story itself is not bad, if not particularly engaging, and there are a number of twists along the way.  Again, though, they are twists that have been included a number of times in science fiction films and books, with even a bit of a small attempt at a Philip K. Dick style existential revelation at one point.  The movie is pretty to look at and doesn't have the cartoon feel of many recent movies, but in the end it is a hollow piece of film making.  I felt quite the same way about director Joseph Kosinski's previous film, Tron: Legacy.

Probably the best comparison of his movies so far would be the simple landscapes you see decorating office lobbies: pretty, but no substance.  After a few glances you start to wonder where you have seen the same thing before, and possibly better.  In the case of Oblivion, that would be many places.