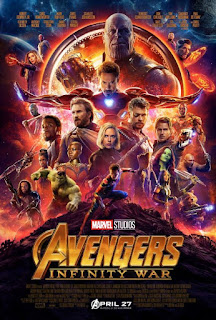 More and more I have had the feeling that the Marvel movies are taking pages from the old Universal monster films.  As those movies began to run out of ideas, became cheaper and tried to keep audiences, they spent more time trying to jam as many monsters as possible.  Problem is, the promised creatures (usually the poor Frankenstein monster) usually got screen time that added up to a minute or less, while the big bad each time was usually another mad scientist bent on immortality, bringing a dead relative back to life or proving that they were the ones that could do what every mad scientist before them couldn't.  Eventually the returns diminished to the point where Universal had no choice but to just start teaming them with Abbott and Costello and going full parody.

Marvel hasn't reached that point yet, but I was afraid they might with Avengers: Infinity War.  This movie is jam-packed with almost every superhero they could get together.  Combine that with the fact that the last movie with the entire group tag, Avengers: Age of Ultron, wasn't that good, and that the villain was a big purple CGI effect with a Playdough-styled beard, and I was definitely not looking forward to this - other than as the movie that might start to convince Disney and Marvel to wind things down. Granted, they were able to do a good job getting the gang together (and against each other) in Captain America: Civil War, but the movie that preceded this one, Thor: Ragnarok, was one of the worst in the series.

Infinity War starts shortly after the end of Ragnarok, with Thanos (Josh Brolin) and his abettors in the Black Order attacking the ship carrying the refugees from Asgard, which was destroyed in the previous film.  Thanos is collecting the Infinity Stones, one of which (the Space Stone) is contained within Loki's (Tom Hiddleston) Tesseract.  The ship, with Thor (Chris Hemsworth), Loki and the others is ultimately destroyed, but not before Heimdall (Idris Elba) has a chance to create a rainbow bridge, sending the Hulk (Mark Ruffalo) to Earth.  He crashes into the Sanctum Sanctorum of Dr. Strange (Benedict Cumberbatch) just as a spaceship arrives in New York carrying two members of the Black Order who attempt to take the Time Stone from Strange.  Ultimately Tony Stark (Robert Downey Jr.) and Peter Parker (Tom Holland) come to his aid, and the three manage to end up on the ship and on the way to Thanos's homeworld of Titan.

Meanwhile, the Guardians of the Galaxy pick up the Asgardian distress signal and rescue Thor.  Rocket Raccoon (Bradley Cooper) and Groot (Vin Diesel) join him on a trip to a star forge to create a weapon to defeat Thanos, while the rest head to Knowhere to retrieve the stone that is in the possession of the Collector (Benicio Del Toro).  Unfortunately, that move results in Thanos capturing Gamora (Zoe Saldana), who knows the location of the elusive Soul Stone.  The remaining Guardians also end up on Titan, eventually joining forces with the Stark, Strange and Parker against Thanos.

On Earth, Vision (Paul Bettany), who has one of the Infinity Stones embedded in his head, and Scarlet Witch (Elizabeth Olsen) barely survive an attack from the Black Order.  Seeking aid they flee to Wakanda, with Captain America (Chris Evans) an his allies coming out of hiding.  Thor, Rocket and Groot arrive to aid as well in a last stand as Thanos and his armies arrive to retrieve the last stone.

I have been trying to cut down on summarizing the films as, really, I don't like my reviews being half going over the plot, but this is about as short as I can cut it down for this movie.  That is one of the things I feared.  There is so much going on, so many different plots, that there is barely time to concentrate on what is going on where.  Wisely there is no attempt to bring everyone together, instead dividing the big fights with Thanos between the team that is on Titan and those that gather in Wakanda.  The ultimate result is that we barely spend any time with any of the heroes.  At this point I'm wondering what Dr. Strange is even doing, since we got an origin film, a brief scene in Black Panther and now, suddenly, we have him a few years down the line when he has mastered his powers.  In the end he does some pretty magic, but is largely useless.

Even more useless is Vision.  Introduced in Age of Ultron, he hasn't contributed anything since.  Now he spends most of the movie in a weakened state and as a mere plot point in order to set up the final battle in Wakanda.  Many of the decisions here are strange, with Captain America having less screen time than Rocket Raccoon.  It is a problem when throwing everything at the wall to see if it sticks, and spending a good portion of the movie playing fan service.  Throw in the Black Order, all of which look cool but end up being the usual CGI blobs when fighting, and Avengers: Infinity War is always on the edge of being a complete mess.

I say on the edge, because there are a number of things that pull it back and eventually save the film.  Despite too many characters being computer generated, this still doesn't look as much of a cartoon as many of the other Marvel films have.  Rather, it has the look of a grand space opera.  It also has one of the more memorable scenes in Thor's visit to Nidavellir, where the dwarf Eitri (Peter Dinklage) forges the axe Stormbreaker for Thor to use against Thanos.  More scenes like this, which also expand a universe in which Nordic gods are an important element, would have been welcome in the Thor movies.

What ends up really holding the movie together is an element where most of the Marvel movies fail.  It's the villain, Thanos.  This time around it's the heroes themselves that are two-dimensional and barely get much notice.  Thanos, on the other hand, is given a developed back story, a reason for his actions and something to do other than sneer or make wisecracks.  He doesn't even see what he is doing as evil, but rather as a painful necessity - killing half the population of every sentient species in the universe in order to save them from turning on each other like his own people did.  Like many of the truly evil people in our own history he thinks his extreme measures are needed to make things better, and sees it as a sacrifice rather than the genocide it is.

In the past the best Marvel villains have been those that were largely flawed in their thinking, but most of those have been humans that could conceivably be defeated by other human beings.  All the big, invincible bad guys have been dull.  This is the first one they got right, and Josh Brolin is able to play Thanos with a depth of character and emotion that shines through what could have been one of the sillier CGI monster designs ever brought to the screen.

With the choppy, and largely absent, story arcs of most of the main characters (save Iron Man and Thor, who have actually had a decent chance to get their characters fleshed out; Captain America gets short shrift here), it is left to Thanos to carry the movie.  It is a brave move, and one that works, and ultimately saves this from being a bunch of people in costumes throwing pretty lights at hordes of copy and pasted monsters.

As for the ultimate outcome of the movie, it is largely undercut by knowing what Marvel has in store for the future.  As drawn out as this series has become it is tempting to say that it should end on this note, although I'm sure it would be frustrating for most - largely the bean counters at Disney, who know there is still some cash to wring out of the characters.  At least there is until they managed to either truly upset the PC crowd or some of the louder, more toxic fans.  So far Marvel has managed to avoid this with a continuous stream of satisfactory, innocuous movies, of which Avengers: Infinity War, despite the praise heaped upon it and the fact that Thanos has proven to be the universe's best character, is still one.