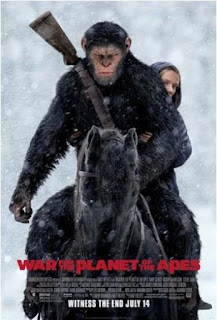 While the Marvel Universe continues to grind away into a third phase, DC attempts to just set up a series of movies that someone wants to see and the Star Wars franchise seems to be dying a death a thousand cuts from its purported fans, another series of films has been quietly successful and consistently good.  One of the best decisions in a long time was to ignore Tim Burton's remake of Planet of the Apes and use the original movies for inspiration, especially many of them had much room to improve upon.

Writer/director Matt Reeves returns from Dawn of the Planet of the Apes, and with fellow screenwriter Mark Bomback has managed to weave quite of the lore from the original series into the new one, while keeping the drama of what would happen with two competing sentient species going.  Not to mention that the humans themselves are no closer to working out their own problems, much less taking the war to the apes in any real fashion.

Not long after the events of Dawn Caesar's (Andy Serkis) group has retreated back to the woods.  He and his army are the subject of an intense search by Colonel McCullough (Woody Harrelson), the commander of the remaining forces that came to the aid of San Francisco at the last minute.  San Francisco fell, many of its leaders being murdered by McCullough, and his guys decided to stay and occupy an abandoned arms and fuel depot that had been converted into a quarantine area during the outbreak of the Simian flu.

Some of McCullough's men come across an ape entrenchment and try to take it, but are driven back.  The survivors, including a man named Preacher (Gabriel Chavarria) and a slave ape, referred to as a "Donkey", named Red (Ty Olsson).  Red was one of the apes that followed Koba in his revolt against Caesar, with he and others deciding it more dignified to serve McCullough rather than to come crawling back to Caesar.  Rather than have them killed, Caesar decides to release them in a show of mercy with hope of ending the conflict.  He especially feels that it is time as an expedition led by Caesar's son Blue Eyes (Max Lloyd-Jones) has returned announcing that they found a desert beyond the mountains, far away from human habitation or interference.

Caesar agrees that it is time to leave, and begins preparations.  However, his act of mercy backfires, as one of his own betrays the location of the ape colony to the Colonel.  His forces invade and are largely fought off, but not before Caesar's wife and Blue Eyes are killed.  Vowing revenge, he instructs everyone else to leave for the desert while he goes off alone to face the Colonel.  Most of the band does so, save the orangutan Maurice (Karin Konoval), fellow chimpanzee Luca (Michael Adamthwaite) and the gorilla Rocket (Terry Notary).

While tracking the soldiers they discover a new phenomenon: after killing a deserter from McCullough's group, the apes find he has a daughter (Amiah Miller) who is unable to speak and is showing some cognitive deterioration.  Maurice, afraid the girl will die if left alone, convinces Caesar to let him bring her along, and names her Nova.  They also gain another traveling companion in Bad Ape (Steve Zahn), a chimpanzee that escaped from his zoo environs when the virus spread.  He is not part of Caesar's group, meaning that the virus spread to all ape populations.  In addition, it is seen that the Colonel's men are executing some of their own, and an encounter shows that they are in the same state as Nova.

Bad Ape is initially reluctant to lead Caesar's party to the Colonel's base, but agrees, and they arrive to find that the rest of their friends and family, rather than making it to the desert, were rounded up by the Colonel and are being used for slave labor.  It isn't long before Caesar is captured by the Colonel, and a few things are revealed: the Simian flu has mutated, causing humans who encounter the new strain to lose many higher brain functions, such as speech.  That was the reason for the executions, as the Colonel was attempting to stop the spread.  Also, his method of stopping it is at odds with his superiors up north, with whom he has broken ties and is now using the captive apes to build a fortification with which to fight off the expected retaliation.  He also sees that among the captives is his surviving son Cornelius (Devyn Dalton).

Caesar does his best to try to make life better for the rest of his apes, even while he suffers for it.  Meanwhile, Maurice, Luca, Bad Ape, Nova and Rocket make plans to help the apes escape through a series of unguarded tunnels beneath the depot.  The escape becomes even more important as it becomes clear that, save for the Donkeys, the Colonel intends to exterminate the apes once the fortifications are complete.  The situation turns even more desperate when, on the night of the escape, the attack finally comes, leaving the fleeing apes caught between two enemies.

While the title of the movie may lead one to picture all-out war between apes and humans, that is not what we get here.  The ultimate war is between all powers for who will eventually be the group that survives and repopulates the Earth.  While the simian population continues to increase in function, more humans devolving, not to mention the ones that haven't are still killing each other in large numbers.  In fact, all Caesar and his companions want to do is get away from it all and find a place where they can found their own society.

Where the colony at San Francisco provided some hope for a return to normalcy, and even some slight hope for peace between the rival species, it is obvious at this point that all of Caesar's grand views for a future of humans and apes living together have largely vanished.  The last vestige of the lab ape that eventually learned to be more is gone when his family is killed.

The major thing that War for the Planet of the Apes does right is have most of the story told from the apes' perspective.  The goals of the Colonel, and even the major end battle between his forces and the remains of the U.S. military, are all background to the story of Caesar's attempts to secure a future for his own people.  The story ultimately begins to unfold as an ape version of Exodus, as can be expected from many of the Genesis allusions in the first two films.

Andy Serkis and all the other motion-capture actors bring life to the apes, even if occasionally Bad Ape's dithering gets a bit annoying.  While I constantly complain about CGI in many current films, the Apes films have consistently kept it as realistic as possible.  The work is consistent from Dawn; the apes feel like living, breathing characters rather than rubbery cartoons.

The only major human, other than the mute Nova, is Woody Harrelson as the Colonel.  He is both a fanatic with delusions of godhood, while being a man broken by emotions that he claims he doesn't have.  The combination makes him dangerous, and by association imbues those that surround him and follow him with the same properties.  Even when shown mercy he and his army don't waver in their beliefs, but rather exploit it as a weakness and double their efforts.  He is also the only major star that isn't hidden behind motion capture, and that is an important choice.  Loading this with star power would have forced Matt Reeves and Mark Bomback to switch back over to the human gaze, while the movie is much more interesting in the way it is put together.

The only thing that is going to be a problem is that one must have seen the other two for this one to work.  It doesn't try to be a standalone movie in any way possible.  There has been a three-year gap between Dawn and War, so there is a brief synopsis at the beginning, but that's all you get.  The good news is that the other two are definitely worth seeing, with both of the latter two movies being on equal footing with each other.  It's bleaker than the original series of films from the '60s and '70s, but so far has done a much better job at building the world in a logical manner.  It's also a fitting end to the series, but it appears that there are plans to move the story forward even more.  We'll see if those stand up to the quality of filmmaking we have received so far.