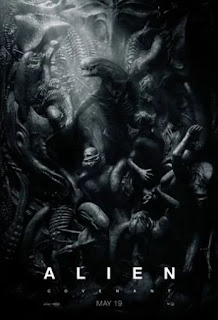 The poor Alien series has been loping along for years, trying to get back the audience t has been systematically alienating since the third movie.  Predator 2 hinted at bringing new life to the series by combining the two universes, but the resulting films managed to be a stain on both.

It was in this atmosphere that there were some big hopes when Ridley Scott, director of the original Alien, returned to make the prequel Prometheus.  That particular movie, though not a fantastic one nor the expected return to form (Scott, despite his clout, seemed to bow to every little bit of studio pressure), was at least interesting in places even if the resulting film was jumbled mess.  It also suffers the problem of many prequels - trying to explain too much.  The Engineers were much more interesting when it was just a mysterious, giant "Space Jockey" in his abandoned ship.

The end of Prometheus promised that the lone survivor, Elizabeth Shaw, would be tracking the Engineers back to their home planet to deal a little bit of justice, even if she made the mistake of bringing the psychotic android David (Michael Fassbender) along with her.  Despite the flaws of Prometheus, this promised to be interesting if continued.

Instead, scared off because of the fan and critical reception to Prometheus, Scott once again bows to studio pressure and returns full-force to the Xenomorphs that are titular to the series, abandoning both Shaw and the Engineers in the process.

The Covenant is a colony ship on its way to terraform and settle the planet Origae-6.  A bit more than seven years out its android caretaker Walter (Fassbender) is forced to wake its crew from cryosleep when a random neutrino burst damages the ship's solar sail and causes internal damage.  During the emergency awakening Captain Branson (James Franco) is burned to death within his pod, devastating his wife Daniels (Katherine Waterston).  It also leaves her second in command to the new captain, Oram (Billy Crudup), who is unsure in his position and largely out of step with the rest of his crew due to being a religious minority.

After grieving for their previous captain (against the orders of their new captain) the crew gets to the job of fixing the sail.  Once everything is back online, pilot Tennessee (Danny McBride) suddenly picks up a rogue signal on his suit radio.  Upon investigation, it is revealed to be a voice humming the John Denver song "Take Me Home Country Roads".  Intrigued, the crew track the transmission to the fourth planet of a nearby star that is only weeks away.  The new planet offers the promise of a ready-made home for the colonists, without having to go back into cryosleep for the next seven years.  Oram decides to go along with the rest of the crew and investigate despite Daniels's reservations.

Upon arrival it does appear to be a promising home, despite a good portion of the planet being covered by an ion storm that makes communications between the ship and surface difficult at best.  Oram, Walter and Daniels accompany Tennessee's wife Faris (Amy Seimetz), biologist Karine (Carmen Ejogo) and a host of trained guards.  While the main group goes in search of the signal, Karine and her guard Ledward (Benjamin Rigby) stay behind while she takes samples.  While going for a smoke he steps on a bulb which releases spores that resemble a form of the black goo encountered on the Engineer ship by the crew of the Prometheus.  Ledward becomes violently ill and Karine tries to get him back to the medbay aboard the lander.

Meanwhile, ORam and the rest find the signal came from a crashed Engineer ship - the one that Elizabeth Shaw (Noomi Rapace) stole 10 years before.  The Prometheus was thought lost for a decade at this point, and for the crew of the Covenant this just deepens the memory.  While exploring the ship Hallett (Nathaniel Dean) is also infected and similarly becomes ill.

Karine makes it back to the ship, and Faris isolates her in the medbay with Ledward, concerned that whatever they may have is contagious.  A pale white creature emerges after an egg sack bursts from Ledward's back, and the creature kills Karine before trying to escape.  Faris tries to destroy it and manages to blow up the lander.  Meanwhile, Hallett births a creature as well that grows at an accelerated rate and kills the guard Ankor (Alexander England) with its tail.  Oram, frozen in fear and in shock at losing a large amount of his crew, is prompted by Daniels to recover and get everyone to safety.  It is then that a hooded figure appears and says to follow him.

The figure turns out to be David, who gives the survivors shelter in the remains of an Engineer city filled with the burned corpses of its former inhabitants.  David claims that the organisms were released during a crash of the ship, something that is soon revealed to be a falsehood.  While he nominally accomplished Shaw's goals, he continued on his own: the recreation of bioengineered organisms that David considers to have reached his ideal of perfection.  This information is revealed to Walter as David strikes up a friendship with him and tries to awaken in the newer model the independent characteristics he possesses.

It soon turns out the city is no refuge at all, as Rosenthal (Tess Haubrich) is attacked by one of the full grown creatures.  When discovered, David tries to control it, but Oram quickly kills it, much to David's anger.  In retaliation, David introduces Oram to the culmination of his experiments: a variation of the facehugger, which impregnates Oram with a chestburster that soon emerges as a prototype form of the Xenomorph encountered years later by the Nostromo.  Walter attempts to prevent David from leaving the planet as Tennessee flies a modified terraforming vehicle to the rescue, while Daniels and the remaining survivors deal with the alien itself.

As should be expected with a Ridley Scott film, there is gorgeous set design and a number of excellent effects shots - one, in particular, if the lander flying among the mountains of the unexplored planet is quite shocking.  The Engineers' city, as well as David's zoological drawings of his experiments, are a tribute to Swiss painter H. R. Giger, who passed away prior to filming Alien: Covenant.  Giger was responsible for the original Xenomorph and Space Jockey designs, and it is arguable that the series never would have been the same without him.

There are also many callbacks in dialogue to the previous Alien films as well as Blade Runner.  In fact, there is more fan service here than in a dozen Star Wars side stories.  Despite a good, if unspectacular, cast and a strange, homoerotic scene involving Walter, David and a recorder (I know I made that sound quite a bit nastier than the scene actually is), Alien: Covenant is surprisingly hollow.  Prometheus may have been all over the place, but at least it was trying to do something new.  Here we are treading old ground, jotting in a few notes here and there and largely just throwing the space equivalent of camp counselors into a meat grinder.  From the beginning I had no connection with any of the characters, and so their deaths were nothing but routine.

Michael Fassbender is probably the only interesting thing in his duel rolls as Walter and David, but again everything (except the recorder scene) that happens between them is predictable.  There are a few revelations about the origin of the Xenomorphs and the fate of the Engineers, as well as Shaw, but there are no surprises.  The entire movie is frustratingly hollow and by the numbers.  It is becoming more and more apparent that, though Scott is a great visual artist, without Dan O'Bannon's imagination even these attempts to return the series to its roots is no more successful than the AvP movies.

The movie underperformed at the box office, which may be a good thing.  Hopefully Scott abandons his plans for the rest of this series, and just lets someone else take over and reboot the whole thing in a decade or two when the foul taste of what has been done to it has an opportunity to fade.