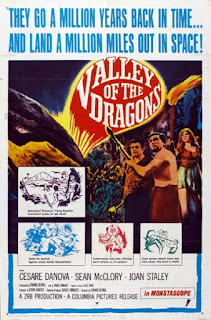 This movie is practically the KLF of movies.

Not familiar with the KLF?  They were Bill Drummond and James Cauty, and are often given credit with creating the trance genre of electronic dance music.  Originally called the Justified Ancients of Mu-Mu (or the JAMMs, for short), they originally gained notoriety after being sued by ABBA for using unlicensed samples on their first album.  Though they continued their rebellious stance (KLF stands for Kopyright Liberation Front), they eventually learned to pay for their samples and eventually evolved their sound, their vital first singles were using samples to create their sound in a more blatant fashion that P-Diddy.

At least the KLF created something worthwhile.  What we have here is another prehistoric adventure with close-ups of lizards standing in for dinosaurs.  To add insult to injury, they couldn't even use their own lizard close-ups.

It's 1881 in Algeria, and Frenchman Hector Servadac (Cesare Danova) and Irishman Michael Denning (Sean McClory) are preparing a pistol duel over a woman they had some conflict over.  Just as they turn to fire a light appears in the sky.  Their seconds are swept away, and the men suddenly find themselves in a strange land with giant mammals and lizards.  At first thinking they have been transported back in time, they are shocked when night comes and they see the Earth rise above the horizon.

It seems that a comet, with enough size and mass to maintain an atmosphere and a varied biome, brushed by the earth and scooped up a bit of the crust as well as some atmosphere - without destroying the Earth itself, but just grabbing a couple random guys.  Turns out that it passes on a regular basis, on average every 100,000 years, and has been doing so long enough to have grabbed everything from dinosaurs to Neanderthals, as well as giving time for stone age homo sapiens to evolve.

The men are attacked by ape-like humanoids, driving them off with the single muskets in their pistols, and grab the spears and axes from the bodies and decide to go exploring before their attackers get the courage to return.  After seeing a tribe leave their caves, they sneak in and steal some of their food and clothing and go off to hunt themselves, encountering a war party from another tribe on their way.  Their hunt doesn't go well, and they are separated when Hector is chased up a tree by a rampaging mastodon and eventually falls into a river and is swept away, managing to cling to a tree branch.

Eventually he is swept toward a shore where things are bit more calm and manages to crawl out.  While sleeping, he is found by Deena (Joan Staley) and taken back to her village.  He begins to teach her English as he heals.  Meanwhile, Michael runs into an old man who belongs to the cave people employing the time-honored hunting method of hitting a large animal over the head and wrestling it to the ground.  It goes as well as can be expected, and Michael ends up rescuing the man.  He is taken in by the cave people, and is tended to by Nateeta (Danielle De Metz), who becomes his after he bests her current beau.

Hector realizes that the area they are in contains sulfur, and starts to get an idea of finding potassium nitrate in some caverns nearby, as charcoal is available from the fires in the village.  His intent is to make gunpowder, but while in the caves he is attacked by troglodytes.  He makes his way out through brute force, while Deena escapes by creating another cave opening and scaring them away with sunlight.  Her efforts do little more than get her captured by the cave people, but she soon recognizes Michael as different due to his shaved face and the fact he speaks English.  She uses her English to let her know that Hector is still alive, and Michael convinces the leader of the tribe to give him a party of men to take her back.

One of the villagers notices Deena's capture by the cave people and informs Hector, who gathers his own war party to rescue her.  The two parties meet and the friends reunite, but at that point a volcano decides to blow its top.  In the chaos, the giant lizards try to take refuge in the caves, trapping the cave people.  It is now up to Michael and Hector to rescue them and possibly bring peace to the warring tribes that inhabit the comet.

This is based on Jules Verne's novel Off on a Comet.  Many changes were made and, believe it or not, the whole "scooped off earth and atmosphere" plot, though scientifically ridiculous, was considered much more seriously in the book.  There was no meeting of prehistoric monsters and tribes, but rather a microcosm of everyone being caught up in the usual debates between the empires and governments at the time the book was written.  I am sure even at the time Verne was aware that a real comet that had enough mass to maintain a breathable atmosphere even for a few years would have killed everyone on Earth before a collision even occurred.  It was just such a situation that created our moon, and is the reason we are here today, rather than what might have lived on the smaller Earth in its original form.

But Verne, though he tried to add some science to his fantasy, knew he was using fantasy toward a means.  Valley of the Dragons throws all that out for dunderheaded explanation just to put butts in seats for a Saturday matinee by enticing kids to come see dinosaurs.  The plot largely is the same as the 1940 version of  One Million Years B.C., with its conflicts between the Cave and Shell people.

And speaking of that movie, that is exactly where Valley of the Dragons got most of its effects.  Yes, there is that pterodactyl - which everyone who even passively watches monster movies will immediately recognize as (in his American form) as Rodan, one of the most famous Japanese movie monsters and star of his own classic film.  I don't know if the mastodon was lifted from another movie, or if they just put a shag carpet on a real elephant and had it chase a stuntman.  And let's not get into the re-tooled Morlock costumes for the troglodytes.

At first I thought a good part of the runtime was going to be taken up by stock footage and narration, like many cheaply made science fiction films, but this movie just had to go that one step further and just steal footage from other, better films (yes, even One Million Years B.C. is better than this).  Another good portion of the runtime focuses Hector and Deena having a swim, she in a prehistoric bikini.  This seems to be the only portion of the film that any effort was put into, no surprise as Joan Staley represents an ideal of beauty at the time.

For what it's worth both Sean McClory and Cesare Danova due a decent job in their parts, doing what they can to put their best feet forward even though I am sure they were well-aware of what kind of film they were stuck in.  Staley and Danielle De Metz, as the female leads, are there largely for eye candy, but it is hilarious to see Deena get even more furious with women approaching Hector than she did at the men for threatening to perforate him.

In all of this mess, there is one thing that really ruins any kind of suspension of disbelief.  Who ever heard of a Frenchman teaching someone from another culture to speak English?  Yes, it's that ridiculous.