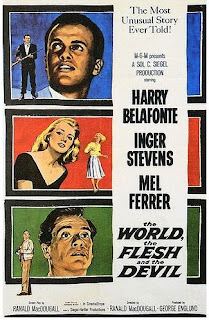 Whenever any date prior to 1967 is mentioned in television shows or movies these days the topics mentioned have nothing to do with economic stability, technological advances or the general state of optimism that existed, but rather two things: the oppression of women and minorities.  If it is to be believed, our grandparents and great-grandparents were barely one step above a plantation overseer, dedicating every day of their life to making sure the world around them stayed a pure, unchallenged white.

There were major issues, and a good part of the last half of the 20th century was spent in dealing with them.  In truth, we'll probably be dealing with them for decades to come, as being awful to others that are not exactly like us seems to be programmed into humanity, largely as a leftover survival instinct from the times when someone who didn't look like you very likely did want to kill you and your family.

What seems to be left out is that, although there were frequent setbacks, things had been changing for close to a century by the time The World, the Flesh and the Devil was released.  Still, at the time, at least the United States had not progressed to the type of equality that we have always promised, and that is the main message of the film.

Ralph Burton (Harry Belafonte) is a Pennsylvania coal miner.  While checking for water seepage in an old tunnel he is trapped by a cave-in.  With enough air and water to survive, and the pumps still working, he at first calmly awaits rescue.  More and more, though, the sounds of digging become less, and finally the pump shuts off.  To avoid drowning he manages to dig his way out and make his way back to the main tunnels, and thus to the surface, only to find the mine abandoned and some of the coal on fire.

His attempts to raise help are met with dead phone lines, and he realizes what has happened once he sees the newspaper headlines: a radioactive sodium isotope was released in the upper atmosphere by an unknown country and quickly spread around the world, killing all living things that were exposed to it.  He later learns from a recording of some of the last radio broadcasts that it had a half-life of five days, which is why he survived.

Looking for any sign of survivors, Burton heads for New York.  Finding his way generally blocked by the traffic that tried to flee, me makes it to the city by boat and finds the city abandoned.  Almost crazy from loneliness, he begins to occupy his time with various projects, the main one being hooking a portion of a city block up to a generator so that he can have power to his building.

However, Burton is not alone.  Sarah Crandall (Inger Stevens) has been watching him for weeks, afraid to approach.  She finally reveals herself when Burton throws a mannequin off a balcony, as she thinks he has finally lost it and killed himself.  The two become friends, and he manages to set up electricity to the place where she is staying and gets the phones working.  He does become upset, though, when she suggests that she move into the building where he lives.  Although the world has ended, Ralph still sees in Sarah the institutionalized racism that remains, especially when she refers to herself as "free, white and 21."

Though he obviously starts to fall in love with her, Burton can't find himself able to cross that boundary which the former society had placed when it came to a black man and white woman.  He actively begins to avoid her and throw himself into trying to contact others who may be alive and improving their living situation.  Things are also thrown into upheaval with the arrival of Benson Thacker (Mel Ferrer), who arrives close to death and is nursed back to health by Burton.  Benson is white, so Burton automatically assumes that he will be the man that Sarah will prefer.  Benson, though, sees it less as a racial matter, but as Burton being his competition.

Once his health is regained, Benson tries to get Burton to leave, which Burton refuses.  Since Thacker believes that Ralph will just return anyway, he decides that the two of them should fight it out, forcing Ralph to arm himself as the two play a cat-and-mouse game through the abandoned streets of the Big Apple with Sarah being the prize - something that she definitely resents being, as it is obvious that racial divides aren't the only negative things that society left in its wake.

Director Ranald MacDougall does a fine job displaying the emptiness of one of the world's largest cities and the impact that it can have on the few survivors.  He does this with a combination of miniatures, matte paintings and actual filming in the pre-morning rush streets of New York itself.  Though relatively unknown today, this movie has had such an impact on apocalyptic movies, from The Quiet Earth, 28 Days Later to the current television show The Last Man on Earth.  Sure, the isotope thing is a bit of a cheat, but it was a lot easier than designing sets featuring a devastated city, and also explains how the few survivors can go on.

Harry Belafonte has a good portion of the movie to himself, and he has always been just as fine an actor as he is a singer.  Typical of a movie from the '50s with a musician, a few musical numbers are worked into the plot to give an excuse for Belafonte to have something to sing.  Knowing Belafonte's history, much of the anger that Ralph Burton expresses is obviously channeled from Bealafonte's own.

Inger Stevens is the other main player, as Mel Ferrer comes in toward the end to act more as a plot device.  She obviously is afraid at first less because of Burton's race, but more because of the typical situation of what happens when some men realize they have a woman alone and without the other laws that govern inappropriate behavior vanished.  Luckily, neither Benson nor Ralph are the type, even though Benson does bring up the subject.  While The World, the Flesh and the Devil is usually looked at for its racial dynamic, it is not shy at also showing that Sarah Crandall is considered a commodity by the two men left in her world, and their differences start to fade once they begin to see her as a person and not as something to be won.  Ferrer isn't bad, and he keeps the audience on its toes as to rather Thacker will turn out to be a good guy or bad guy, but again his job is to drive the points of the movie home.

Too bad that is where it kind of falls apart.  From the time Benson arrives on the scene the movie loses all subtlety.  No longer are we watching people adapt to their new situation, but we have gunned it right through the gates and past the border of the Republic of Allegoria, passport be damned.  In context, this was a risky thing to do at the time, but the fact that it did not make enough ripples to elevate this movie beyond a mere curiosity says something about the majority of the United States at the time.  A less-daring take on interracial relationships from a decade later, Guess Who's Coming to Dinner?, is more well-known.

With that in mind, I still would recommend this movie for its great location filming and Harry Belafonte's barely sane portrayal of a man who finds himself in a world that has passed on.  While the statements made in the movie were, and are, important, clumsy handling tends to bring everything crashing down upon itself in the end.