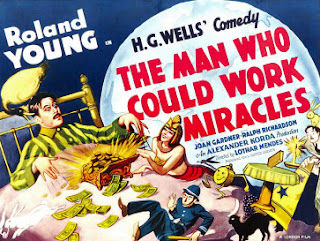 There is something about watching British and other European films (even German ones until Hitler came into power) in the period between the two world wars that is both interesting and unsettling.  It is obvious that a society, based so much on the prospects of empire building and the glory of battle, was shaken to its core by the wholesale slaughter that was the Great War.  Prior to 1914, despite the usual conflicts going on, there is still a sense of optimism, even from writers like H. G. Wells, is the human spirit.  Afterward, even in what is a light-hearted comedic fantasy, the loss of innocence that comes with losing nearly a generation of young men is apparent.

Of course The Man Who Could Work Miracles has many laugh-out-loud moments, and features that dry British sense of humor in a way that the Ealing comedies later would.  There is just that feeling throughout that, despite the brief period of peace, things are going to be much, much worse.  I would say I was reading too much into it from a modern perspective if it wasn't so apparent in Things to Come, another movie based on H. G. Wells's writings released the same year.

Two celestial beings (George Sanders, Ivan Brandt) are conversing, concerned that their colleague (Torin Thatcher) is spending too much time observing the goings-on of human beings on Earth.  They don't understand why he wastes his time, but he is sure that there is potential in humanity beyond what they see, and resists the urging of the others to wipe out humanity.  Instead, he decides to try an experiment, by giving one random human being the power to do and create anything he wishes, the only caveat is that he does not have the power to directly bend others to his will.

This random human turns out to be George McWhirter Fotheringay (Roland Young), a store clerk in Essex, who suddenly discovers he has the power to do miracles while, ironically, attempting to disprove them at the local tavern.  His efforts get him thrown out, but he spends the rest of the night experimenting with his new-found power.

Determined to keep it to himself, he is dismayed to already find that word got around about his pub exploits when fellow store clerk Maggie (Sophie Stewart) brings it up.  To show what he can do, he heals her sprained arm and removes the freckles from her friend Effie (Joan Hickson), and further surprises his boss Major Grigsby (Edward Chapman) by rearranging the entire store with a wave of his hand.

While planning on what exactly to do with his powers, he falls afoul of the local constable and, after first sending him to Hell, decides to send him to San Francisco, causing a major problem for the San Francisco police and the local constabulary.  Meanwhile, Fotheringay seeks the advice of those around him, largely after finding out that he is unable to use his powers to force Ada (Joan Gardner), the woman he wants most, to love him.

Ada's boyfriend Bill (Robert Cochran) suggests that Fotheringay use his powers to give himself untold wealth, while Grigsby proposes that they partner to build a series of stores around the world and charge for the miracles.  He is appalled at the idea that goods could be given away for free, just as local banker Mr. Bamfylde (Lawrence Hanray) is frightened by the fact that Fotheringay can produce money out of thin air.

On Maggie's insistence he visits the village's new Baptist minister, Mr. Maydig (Ernest Thesiger), who suggests that he uses his power to end hunger, war and all other strife.  He also suggests that he turn all the whisky in the home of his neighbor, Colonel Winstanley (Ralph Richardson) into water and his weapons collection into ploughshares.  Fotheringay does so, much to Winstanley's consternation, and changes everything back the next day to appease him.  However, Winstanley is none too happy about Maydig and Fotheringay's plans, and decides to take matters in his own hands - that matter being a long-range rifle, in which he almost manages to do the job.

Fotheringay quickly makes himself impervious to bullets and, instead of following the advice of any of them, builds a palace, declares himself prince, Maggie queen and Ada his concubine.  He fills the hall with all the religious and political leaders of the world to tell them how things are going to be, and how they have until the sun sets to work out a world in which he will be happy.  Unfortunately, Fotheringay himself is about to learn the same lesson about power that he tries to teach the world.

Surprisingly, given H. G. Wells's socialist leanings, there wasn't as much emphasis on creating equality between the workers and those who hold the capital.  It is obvious that Fotheringay could easily bring about a bloodless socialist revolution with the wave of his hand, but by this time some lessons were being learned that a socialist society did not automatically erase the selfish aims of individuals, nor did it diminish the urge to seize power when the opportunity arises.

Instead, Fotheringay, though a simple man of the people, is able to ponder his way through the advice given and realizes that no one thing can make everyone happy.  Unfortunately, it means that he settles on trying to make only one person - himself - happy.  Even that happiness seems to be questionable.

Roland Young, though quite a bit older than the "young" role he is supposed to be playing, does a great job of showing a man transformed from a simple view of the world to outright cynicism and, finally, godlike delusion.  Of course, since this is both a comedy and a morality tale, the other characters are meant to play to type, from the righteous Maydig to the over-the-top militarism of Winstanley and the implied changing sexual morals of Ada.  All play their parts well, but the only one who really gets to shine on his own Ralph Richardson, playing Winstanley with outrageous drunken pomposity.  Still, it is his butler (George Zucco) that gets one of the best lines in the film.

The other thing to mention is that The Man Who Could Work Miracles, like Things to Come, contains a number of great special effects given the time period and the budget.  Sure, you can reverse the camera, but someone hand to take the time to slightly move everything in Grigsby's store in order to get the effect of the entire place being cleaned up.

Like much of H. G. Wells's material, The Man Who Could Work Miracles still resonates today, and is still quite a fun watch.  Also, look for a young Michael Rennie (who played Klaatu in The Day the Earth Stood Still) in an uncredited role as a San Francisco cop.